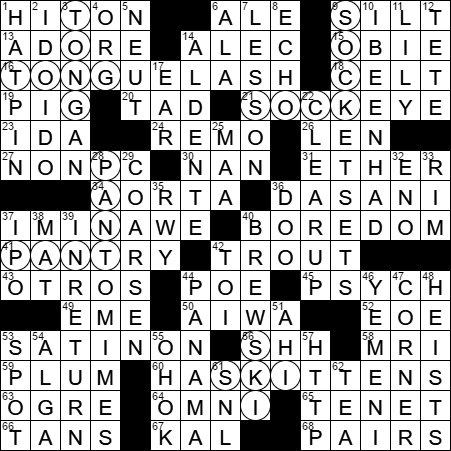 68A. Figure skating event … or what the circled items always come in : PAIRS

Today’s Wiki-est, Amazonian Googlies
Across
6. Cousin of lager : ALE
Lager is so called because of the tradition of cold-storing the beer during fermentation. “Lager” is the German word for “storage”.

14. Baldwin known for his presidential impersonation : ALEC
Alec Baldwin is the oldest of the acting Baldwin brothers. I think Alec’s big break was playing Tom Clancy’s Jack Ryan in “The Hunt for Red October”, but thank goodness that role was taken over by Harrison Ford for the subsequent Jack Ryan movies. Baldwin also made a name for himself playing Jack Donaghy on “30 Rock”, opposite Tina Fey. More recently, he is known for impersonating Donald Trump on “Saturday Night Live”.

The Village Voice is a free newspaper distributed in New York City. It had a great advertising slogan in the eighties: “Some people swear by us … other people swear AT us”.

18. TD Garden athlete, informally : CELT
TD Garden is a sports arena that was built in the 1990s to replace the aging Boston Garden as home for the Boston Celtics basketball team and the Boston Bruins hockey team.

21. Salmon type : SOCKEYE
The sockeye salmon is also known as the red or blueback salmon. The name “sockeye” comes from “suk-kegh”, a word from the native language of an indigenous people in British Columbia. “Suk-kegh” means “red fish”.

23. Wash. neighbor : IDA
Idaho has the nickname the Gem State, mainly because almost every known type of gemstone has been found there. Idaho is also sometimes called the Potato State as potatoes are such a popular crop in the state. I’d go for the potatoes over the gems, but that’s probably just me …

24. San ___, Italy : REMO
The Italian city of San Remo sits on the Mediterranean, right on the border with France. In Italian the city is named Sanremo, just one word, although the spelling of “San Remo” dates back to ancient times.

31. Early anesthetic : ETHER
Ethers are a whole class of organic compounds, but in the vernacular “ether” is specifically diethyl ether. Diethyl ether was once very popular as a general anesthetic.

34. Main line from the heart : AORTA
The aorta originates in the heart and extends down into the abdomen. It is the largest artery in the body.

41. Kitchen cabinet : PANTRY
The word “pantry” dates back to 1300 when it came into English from the Old French “panetrie” meaning a “bread room”. Bread is “pain” in French, and “panis” in Latin.

42. Rainbow ___ : TROUT
The steelhead and rainbow trout are actually the same species. The difference is that rainbow trout spend almost their whole lives in freshwater. Steelheads spend much of their lives in estuaries or open ocean, returning to freshwater to spawn.

43. Others, in Oaxaca : OTROS
Oaxaca is a state in the southern part of Mexico on the Pacific coast. The state takes the name of Oaxaca, its largest city.

49. Suffix with morph- : -EME
“Morpheme” is a term used in linguistics. A morpheme is a language’s smallest grammatical unit. A word may have several morphemes. A prefix such as “un-” is an example of a morpheme in English, as is the letter “s” added at the end of a word to make a plural.

67. Penn of “Harold & Kumar” films : KAL
Indian-American actor Kal Penn made a name for himself in the “Harold & Kumar” series of comedy films. These so called “stoner comedies” are not my cup of tea, but I enjoyed him playing his more mainstream roles on TV’s “House” and “24”. He left the world of acting when President Obama won the 2008 election and now works as an Associate Director in the White House Office of Public Engagement (although he did leave the White House briefly to film the “Harold & Kumar” sequel).

Down
3. Friendly Islands native : TONGAN
The Kingdom of Tonga is made up of 176 islands in the South Pacific, 52 of which are inhabited and scattered over an area of 270,000 square miles. Tonga was given the name Friendly Islands in 1773 when Captain James Cook first landed there, a reference to the warm reception given to the visitors.

6. Pie ___ mode : A LA
In French, “à la mode” simply means “fashionable”. In America, the term has also come to describe a way of serving pie. Pie served à la mode includes a dollop of cream or ice cream, or as I recall from my time living in Upstate New York, with a wedge of cheddar cheese.

You will have finished the crossword before reading the rest of the paper.

12. Part lopped off by la guillotine : TETE
The English word “head” translates into French as “tête”, and into German as “Kopf”.

14. How pasta may be prepared : AL DENTE
The Italian expression “al dente” literally means “to the tooth” or “to the bite” and is used to describe not only pasta, but also vegetables that are cooked so that they are tender and yet still crisp.

28. Plays charades : PANTOMIMES
Our word “pantomime” comes from the Greek word “pantomimos” meaning “actor”. The literal translation of the Greek is “imitator of all”, from “panto-” (all) and “mimos” (imitator). We use the term today to describe communication by means of facial expression and physical gestures. On the other side of the Atlantic, pantomimes (“pantos”) are also very popular Christmas entertainments based on nursery tales like “Mother Goose”, “Aladdin” and “Jack and the Beanstalk”. Great, great stuff …

32. Brian who composed “Discreet Music” : ENO
“Discreet Music” is a 1975 studio album released by British musician Brian Eno. The album features music that approaches the “ambient” style for which he later became famous. Eno was inspired to make the album while bedridden in hospital after an automobile accident. He found himself listening to 18th-century harp music repeatedly on a turntable, but could not reach the volume control so that he was forced to listen to it playing very quietly. From this experience, Eno started writing music that was meant to blend in with the background, become part of the ambience.

33. What an air ball misses : RIM
A air ball in basketball is a shot that misses, without even touching the rim, net or backboard.

36. Scooby-___ : DOO
“Scooby-Doo, Where Are You!” is a series of cartoons produced for Hanna-Barbera Productions, first broadcast in 1969. The title character is a great Dane dog owned by a young male called Shaggy Rogers. The character’s name was inspired by the famous “doo-be-doo-be-doo” refrain in the Frank Sinatra hit “Strangers in the Night”. Shaggy was voiced by famed disk jockey Casey Kasem.

37. Big step for a young company, for short : IPO
An Initial Public Offering (IPO) is the very first offer of stock for sale by a company on the open market. In other words, an IPO marks the first time that a company is traded on a public exchange. Companies have an IPO to raise capital to expand (usually).

42. You, in Tours : TOI
Tours is the largest city in the Centre region of France. It is said that the people of Tours speak the “purest” form of French in the whole country, and when spoken by a local it is also said to be free of any accent.

44. Isthmus land : PANAMA
The nation that we now know as Panama sits on an isthmus that formed about 3 million years ago. The isthmus was the result of a land bridge forming between North and South America as two tectonic plates of the Earth’s crust slowly collided. Man first attempted to create a waterway across the Isthmus of Panama in 1881, but the 48-mile long Panama Canal only opened for business in 1914.

46. Native of Mocha : YEMENI
Mocha is a port city in Yemen on the Red Sea and was once the principal port for the capital city of Sana’a. Mocha was the major marketplace in the world for coffee until the 1600s, and gave its name to the Mocha coffee bean, which in turn gave it’s name to the mocha brown color, and to the flavor of coffee infused with chocolate.

53. Dalmatian feature : SPOT
The Dalmatian breed of dog originated in Dalmatia, in the Republic of Croatia. Here in the US, Dalmatians are known as “firehouse dogs”. This association dates back to the use of Dalmatians in firehouses to guard the valuable horses that pulled the fire engines.

57. Start of a web address : HTTP
“http” are the first letters in most Internet links. “http” stands for HyperText Transfer Protocol.

62. Pekoe, for one : TEA
A pekoe (or more commonly “orange pekoe”) is a medium-grade black tea. There is no orange flavor in an orange pekoe tea. The “orange” name most likely derived from the name of the trading company that brought the tea to Europe from Asia.