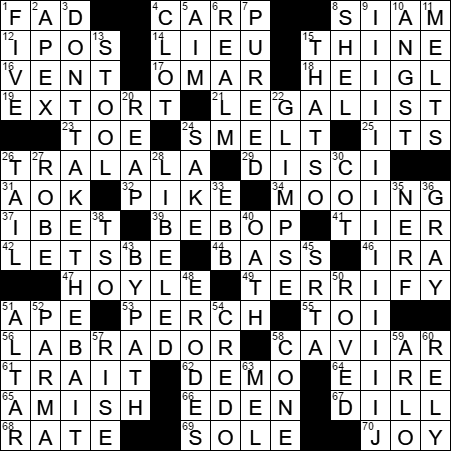 CROSSWORD CONSTRUCTOR: Jacob Stulberg
THEME: Don’t Take the Bait
Each of today’s themed answers is a fish. And, we have a hook on a fishing line (made from letters I and a J) running down the right side of the grid:

3D. Warning for easily provoked types … or for the answers to the six starred clues? : DON’T TAKE THE BAIT

9D. What might tempt the answers to the six starred clues? : IIIIIIIIIIIIIIJ

Today’s Wiki-est, Amazonian Googlies
Across
1. Ice Bucket Challenge, in 2014 : FAD
The ALS Ice Bucket Challenge is a viral phenomenon in which participants are challenged to be filmed having a bucket of ice water poured over their heads. Each participant then gets to nominate up to three other people to do the same. Usually the nominees are given a day or two to comply, but can make a charitable donation is they want to avoid the icy shower. Happily, many participants opt to take the challenge, and also make a donation.

4. *Complain : CARP
The word “carp” used to mean simply “talk” back in the 13th century, with its roots in the Old Norwegian “karpa” meaning “to brag”. A century later the Latin word “carpere” meaning “to slander” influenced the use of “carp” so that it came to mean “find fault with”.

Carp are freshwater fish that are used as food around the world, although they aren’t very popular in North American kitchens. The ornamental fish that we know as goldfish and koi are all types of carp.

8. “The King and I” setting : SIAM
“Anna and the King of Siam” is a semi-biographical novel written by Margaret Landon and first published in 1944. The book tells the largely true story of Anna Leonowens who spent five years in Siam teaching English to the children and wives of King Mongkut. The novel was adapted as a 1946 movie of the same name starring Irene Dunne and Rex Harrison. Then followed a 1951 stage musical titled “The King and I”. The musical was written as a vehicle for Gertrude Lawrence, who played Anna. Rex Harrison was asked to play the King, but he turned it down and Yul Brynner was cast instead. A movie version of the stage musical was released in 1956, famously starring Yul Brynner and Deborah Kerr.

12. Corp. milestones : IPOS
An initial public offering (IPO) is the very first offer of stock for sale by a company on the open market. In other words, an IPO marks the first time that a company is traded on a public exchange. Companies have an IPO to raise capital to expand (usually).

17. W.W. II general Bradley : OMAR
Omar Bradley graduated from West Point in the class of 1915, along with Dwight Eisenhower who also attained the rank of General of the Army. Bradley was the last person to hold the rank of a five-star commissioned officer, and he was the first general to serve as Chairman of the Joint Chiefs of Staff. I was struck by a quotation from Bradley from later in his life:

18. Katherine of “27 Dresses” : HEIGL
Katherine Heigl is best associated with the television show “Grey’s Anatomy” on which she plays Dr. Izzie Stevens. That’s not a show I ever watched, but I did enjoy the espionage show “State of Affairs” in which Heigl played the lead. I guess I was in the minority though, as NBC cancelled “State of Affairs” after only one season …

24. *Extract with heat, in a way : SMELT
Metals are found in ore in the form of oxides. In order to get pure metal from the ore, the ore is heated and the metal oxides within are reduced (i.e. the oxygen is removed) in the chemical process known as smelting. The oxygen is extracted by adding a source of carbon or carbon monoxide which uses up the excess oxygen atoms to make carbon dioxide, a waste product of smelting (and, a greenhouse gas).

Smelt is the name given to several types of small silvery fish, examples being Great Lake smelts and whitebait smelts.

31. Hunky-dory : A-OK
Our term “A-OK” is supposedly an abbreviation for “A(ll systems are) OK”, and arose in the sixties during the Space Program.

44. *The Mikado in “The Mikado,” e.g. : BASS
“The Mikado” is a wonderful comic opera by Gilbert and Sullivan, set in the exotic location of Japan. “Mikado” is a former term for the “Emperor of Japan”. In the opera, Ko-Ko is the name of the Lord High Executioner of Titipu.

47. Big name in games : HOYLE
Edmond Hoyle was a writer, most famous for documenting the rules and play of card games. In particular, Hoyle first wrote a book on the game of whist that was very popular. Such was the success of Hoyle’s treatises that we use the phrase “according to Hoyle” to mean “according to some respected authority”. When the Poker Hall of Fame was founded in 1979, Edmund Hoyle was one of the first inductees, even though the game of power was invented after he died.

53. *Birdcage feature : PERCH
Perch are carnivorous freshwater fish that are found all over the world. However, perch are particularly common in the Great Lakes and in Lake Erie in particular.

58. Fancy cracker topping : CAVIAR
Caviar is the roe of a large fish that has been salted and seasoned, and especially the roe of a sturgeon. Beluga caviar comes from the beluga sturgeon, found primarily in the Caspian Sea. It is the most expensive type of caviar in the world. 8 ounces of US-farmed beluga caviar can be purchased through Amazon.com for just over $850, in case you’re feeling peckish …

65. Many rural Pennsylvanians : AMISH
The Amish are a group of Christian churches, a subgroup of the Mennonite churches. The Amish church originated in Switzerland and Alsace in 1693 when it was founded by Jakob Ammann. It was Ammann who gave the name to the Amish people. Many Amish people came to Pennsylvania in the 18th century.

66. Site of a famous eviction : EDEN
In the Christian tradition, the “fall of man” took place in the Garden of Eden when Adam and Eve succumbed to the temptation of eating from the tree of knowledge of good and evil. This went against the bidding of God, and was at the urging of the serpent. As a result, Adam and Eve were banished from Eden to prevent them becoming immortal by eating from the tree of life. The first humans had transitioned from a state of innocent obedience to a state of guilty disobedience.

69. *Shoe part : SOLE
The group of flatfish known as soles take their name from “solea”, the Latin word for “sandal”. And, they kind of have that shape.

Down
1. Solid orange ball : FIVE
That would the game of pool.

7. Like baby food, often : PUREED
A “purée” is a food that has been made smooth by straining or blending. “Purée” is a French term, which I believe is now used to mean “pea soup” (more completely written as “purée de pois”). The French verb “purer” means “to strain, clean”, from the Latin “purare” meaning “to purify, clean”.

8. Poet Silverstein : SHEL
Author Shel Silverstein had a varied career and did a lot more than write books. Silverstein was a poet, composer, cartoonist and screenwriter among other things. One of his successful children’s books is “The Giving Tree”, which was first published in 1964. “The Giving Tree” tells of a young boy who has a special relationship with a tree in a forest. The message of the book seems to be that the tree provides the little boy with everything he needs.

27. Spa wear : ROBE
The word “spa” migrated into English from Belgium, as Spa is the name of a municipality in the east of the country that is famous for its healing hot springs. The name “Spa” comes from the Walloon word “espa” meaning “spring, fountain”.

28. Cast aspersions on, in a way : LIBELED
The word “libel”, meaning a published or written statement likely to harm a person’s reputation, comes into English from the Latin “libellus”, the word for a small book. Back in the 1500s “libel” was just a formal written statement, with the more damaging meaning arising in the 1600s.

35. ___ Blaster (toy gun) : NERF
Nerf is soft material used in a whole series of toys designed for “safe” play indoors. The Nerf product is used to make darts, balls and ammunition for toy guns. “NERF” is an acronym, standing for Non-Expanding Recreational Foam.

38. Name on Chinese restaurant menus : TSO
General Tso’s chicken is an American creation, often found on the menu of a Chinese restaurant. The name General Tso may be a reference to General Zuo Zongtang of the Qing Dynasty, but there is no clear link.

52. Italian city known for its prosciutto and cheese : PARMA
Parma is a city in northern Italy, famous for its ham (prosciutto) and cheese (parmesan).

54. Words to live by : CREDO
A creed or credo is a confession of faith, or a system of belief or principles. “Credo” is Latin for “I believe”.

59. Singer Guthrie : ARLO
Arlo Guthrie is the son of Woody Guthrie. Both father and son are renowned for their singing of protest songs about social injustice. Arlo is most famous for his epic “Alice’s Restaurant Massacree”, a song that lasts a full 18m 34s. In the song Guthrie tells how, after being drafted, he was rejected for service in the Vietnam War based on his criminal record. He had only one incident on his public record, a Thanksgiving Day arrest for littering and being a public nuisance when he was 18-years-old.

63. Former senator and R.N.C. head Martinez : MEL
Mel Martínez served as Secretary of Housing and Urban Development in the cabinet of President George W. Bush. Martínez resigned from that position in 2003 to mount what proved to be a successful campaign to become US Senator for Florida. When he took his seat in 2005, Martínez became the first Cuban-American to serve in the US Senate.