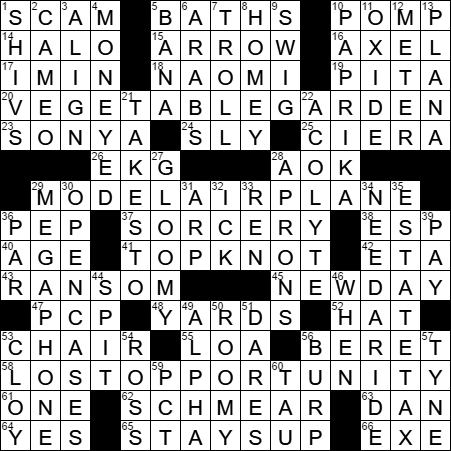 CROSSWORD CONSTRUCTOR: Timothy Polin
THEME: Phonetic Clues
Today’s themed clues/answers come in intersecting pairs. One element of the pair is sounded out phonetically to give the clue for the second element:

Today’s Wiki-est, Amazonian Googlies
Across
14. Good sign? : HALO
The Greek word “halos” is the name given to the ring of light around the sun or moon, which gives us our word “halo”, used for a radiant light depicted above the head of a saintly person.

16. Spin out on the ice? : AXEL
An axel is a forward take-off jump in figure skating. The maneuver was first performed by Norwegian Axel Paulsen at the 1882 World Figure Skating championships.

19. Bread at a Greek restaurant : PITA
Pita is a lovely bread in Middle-Eastern and Mediterranean cuisines. Pita is usually round, and has a “pocket” in the center. The pocket is created by steam that puffs up the dough during cooking leaving a void when the bread cools.

26. Test done in pre-op : EKG
An EKG measures electrical activity in the heart. Back in my homeland of Ireland, an EKG is known as an ECG (for electrocardiogram). We use the German name in the US, Elektrokardiogramm, giving us EKG. Apparently the abbreviation EKG is preferred as ECG might be confused (if poorly handwritten, I guess) with EEG, the abbreviation for an electroencephalogram.

28. Hunky-dory : A-OK
Our term “A-OK” is supposedly an abbreviation for “A(ll systems are) OK”, and arose in the sixties during the Space Program.

37. Subject studied at Hogwarts : SORCERY
In J.K. Rowling’s “Harry Potter” universe, The Hogwarts School of Witchcraft and Wizardry was founded by the four most brilliant witches and wizards of their time: Godric Gryffindor, Helga Hufflepuff, Rowena Ravenclaw and Salazar Slytherin. Each of the founders lent their name to a House in the school, i.e. Gryffindor, Hufflepuff, Ravenclaw and Slytherin.

42. Seventh of 24 : ETA
Eta is the seventh letter of the Greek alphabet, and is a forerunner of our Latin character “H”. Originally denoting a consonant, eta was used as a long vowel in Ancient Greek.

47. Angel dust, briefly : PCP
Phencyclidine is a recreational drug usually referred to on the street as “PCP” or “angel dust”.

53. Meeting bigwig : CHAIR
A “bigwig” is someone important. The use of the term harks back to the days when men of authority and rank wore … big wigs.

55. Mauna ___ : LOA
Mauna Loa on the “big island” of Hawaii is the largest volcano on the planet (in terms of volume). The name “Mauna Loa” is Hawaiian for “Long Mountain”.

62. Bagel topper : SCHMEAR
The word “schmear” comes from the Yiddish word “shmir” meaning “spread”. The phrase “the whole schmear” is a relatively recent one, dating back to around 1969 and coming from the world of business.

63. Level of judo proficiency : DAN
Judo is a martial art from Japan that was developed relatively recently, in 1882. The name “judo” translates as “gentle way”. Practitioners of judo proceed through a series of proficiency grades known as the kyu-dan system. At each progression, a different colored belt is awarded.

66. PC file suffix : EXE
In the Windows Operating System, a file with the extension .exe is an “executable” file.

Down
1. Prison weapons : SHIVS
“Shiv” is a slang term for a weapon crudely fashioned to resemble a knife. Mostly we hear of shivs that have been fashioned by prison inmates to do harm to others.

2. It might be just a line or two : CAMEO
Even in my day, a cameo role was more than just a short appearance in a movie (or other artistic piece). For the appearance to be a cameo, the actor had to playing himself or herself, and was instantly recognizable. With this meaning it’s easy to see the etymology of the term, as a cameo brooch is one with the recognizable carving of the silhouette of a person. Nowadays, a cameo is any minor role played by a celebrity or famous actor, regardless of the character played.

5. Eric who played Hector in “Troy” : BANA
Eric Bana is an Australian actor who enjoyed a successful career in his home country before breaking into Hollywood playing an American Delta Force sergeant in “Black Hawk Down”. A couple of years later he played the lead in Ang Lee’s 2003 movie “Hulk”, the role of Dr Bruce Banner. More recently he played the Romulan villain Nero, in the 2009 “Star Trek” movie.

6. Ali Baba and others : ARABS
There is some controversy about the story “Ali Baba and the Forty Thieves” in that it has been suggested it was not part of the original collection of Arabic tales called “One Thousand and One Nights”. The suggestion is that the Ali Baba tale was added by one of the European translators of the collection.

7. Online provocateur : TROLL
In Internet terms, a “troll” is someone who attempts to disrupt online group activities. The fishing term “troll” is used to describe such a person, as he or she throws out off-topic remarks in an attempt to “lure” others into some emotional response. Sad, sad people …

10. Goulash flavorer : PAPRIKA
Goulash is a soup or stew that is seasoned with spices, especially paprika. It is a national dish of Hungary, and the term “goulash” comes from the Hungarian word “gulyás”, which actually translates as “herdsman”. The original goulash was a meat dish prepared by herdsman.

11. Nitrous ___ : OXIDE
Laughing gas is the common name for nitrous oxide. Nitrous oxide is used as an anesthetic, particularly by dentists. It is also used in motor racing to increase the power output of engines. Laughing gas was first synthesized by the English chemist Joseph Priestly, but it was Humphrey Davy who discovered its potential as an anesthetic. Once it was realized that the gas could give the patient a fit of the giggles, “laughing gas parties” became common among those could afford them.

12. What doggerel usually lacks : METER
“Doggerel” is a term used to insult poetry that has little value as literature. The term probably comes from “dog”, perhaps in that it is “only fit for dogs”.

22. Devotee : ACOLYTE
The word “acolyte” comes from the Greek “akolouthos” meaning “companion, attendant, helper”. In the Christian tradition, an acolyte is an individual who assists some way in a ceremony, by lighting candles for example. In more general terms, an acolyte is a devoted follower or attendant.

31. Duchamp contemporary : ARP
Jean Arp was a French artist renowned for his work with torn and pasted paper, although that wasn’t the only medium he used. Arp was the son of a French mother and German father and spoke both languages fluently. When he was speaking German he gave his name as Hans Arp, but when speaking French he called himself Jean Arp. Both “Hans” and “Jean” translate into English as “John”. In WWI Arp moved to Switzerland to avoid being called up to fight, taking advantage of Swiss neutrality. Eventually he was told to report to the German Consulate and fill out paperwork for the draft. In order to get out of fighting, Arp messed up the paperwork by writing the date in every blank space on the forms. Then he took off all of his clothes and walked with his papers over to the officials in charge. Arp was sent home …

53. Be too sweet : CLOY
“To cloy” is to cause distaste by oversupplying something that would otherwise be pleasant, especially something with a sweet taste.

54. Sewer of note : ROSS
Legend has it that Betsy Ross made the first American flag for General George Washington. However, this story only surfaced during the centennial celebrations of 1876, and although Betsy Ross was indeed one of several flag makers in Philadelphia in the days of George Washington, sadly there’s no definitive evidence that Ross provided that first stars and stripes.

60. 19th of 24 : TAU
Tau is the 19th letter of the Greek alphabet, the letter which gave rise to our Roman “T”. Both the letters tau (T) and chi (X) have long been symbolically associated with the cross.