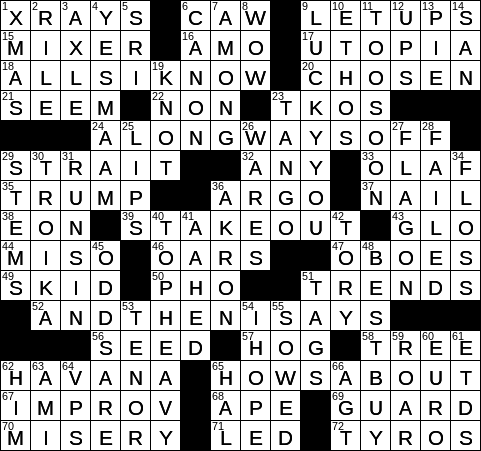 CROSSWORD SETTER: Tom McCoy
THEME: S Takeout
Today’s themed answers are familiar versions of common phrases. Each includes an extra letter S that is not used in the grammatically correct phrase itself:

Today’s Wiki-est, Amazonian Googlies
Across
1. Set of pictures at a dentist’s : X-RAYS
X-rays were first studied comprehensively by the German physicist Wilhelm Röntgen (also “Roentgen”), and it was he who gave the name “X-rays” to this particular type of radiation. Paradoxically, in Röntgen’s native language of German, X-rays are routinely referred to as “Röntgen rays”. In 1901 Röntgen won the first Nobel Prize in Physics that was ever awarded, recognition for his work on X-rays.

16. “I love,” to Cato : AMO
Cato the Elder was a Roman statesman, known historically as “the elder” in order to distinguish him from his great-grandson, Cato the Younger. Cato the Elder’s ultimate position within Roman society was that of Censor, making him responsible for maintaining the census, and for supervising public morality.

Cato the Younger was a politician in the late Roman Republic, noted for his moral integrity. He is also remembered for an extended conflict with Julius Caesar.

17. Perfect world : UTOPIA
The word “Utopia” was coined by Sir Thomas More for his book “Utopia” published in 1516 describing an idyllic fictional island in the Atlantic Ocean. More’s use of the name Utopia comes from the Greek “ou” meaning “not” and “topos” meaning “place”. By calling his perfect island “Not Place”, More was apparently making the point that he didn’t think that the ideal could actually exist.

23. Boxing achievements, in brief : TKOS
In boxing, a knockout (KO) is when one of the fighters can’t get up from the canvas within a specified time, usually 10 seconds. This can be due to fatigue, injury, or the participant may be truly “knocked out”. A referee, fighter or doctor may also decide to stop a fight without a physical knockout, especially if there is concern about a fighter’s safety. In this case the bout is said to end with a technical knockout (TKO).

33. Villainous count in the Lemony Snicket books : OLAF
Count Olaf is the main antagonist in “A Series of Unfortunate Events”, the collection of children’s novels penned by Lemony Snicket  (the pen name of Daniel Handler).

35. Obama’s successor : TRUMP
When Donald Trump became US president in 2017, he became the oldest person ever to assume the office, as well as the wealthiest. He is also the first US president without prior experience in either the US military or in government.

36. Jason’s ship : ARGO
In Greek mythology, Jason and the Argonauts sailed on the Argo in search of the Golden Fleece. The vessel was called the “Argo” in honor of the ship’s builder, a man named Argus.

43. Day-___ paint : GLO
“Dayglo” is a registered trademark used for an ink or paint that glows when exposed to a black light in a darkened room. When Dayglo paint is viewed in daylight the colors can look particularly vivid because they respond to the UV light that is present in sunlight.

44. Japanese soup : MISO
Miso is the name of the seasoning that makes the soup. Basic miso seasoning is made by fermenting rice, barley and soybeans with salt and a fungus to produce a paste. The paste can be added to stock to make miso soup, or perhaps to flavor tofu.

50. Vietnamese soup : PHO
“Pho” is a noodle soup from Vietnam that is a popular street food.

51. What Google’s Ngram program tracks, for word usage : TRENDS
Google’s Ngram Viewer searches for words or phrases and charts the frequency of their usage in print media. The database used for the search comprises sources printed between the years 1500 and 2008.

56. Peach pit or walnut : SEED
Our everyday usage of “nut” is often at odds with the botanical definition of the term. Examples of “true nuts” are acorns, chestnuts and hazelnuts. On the other hand, even though we usually refer to almonds, pecans and walnuts as “nuts”, botanically they are classified as “drupes”. Both drupes and true nuts are fruits, the vehicles that flowering plants use to disseminate seeds. True nuts are examples of a “dry fruit”, a fruit that has no fleshy outer layer. Drupes are examples of a “fleshy fruit”, a fruit with a fleshy outer layer that often makes it desirable for an animal to eat. Familiar examples of drupes are cherries, peaches and plums. We eat the fleshy part of these drupes, and discard the pit inside that contains the seed. Other examples of drupes are walnuts, almonds and pecans. The relatively inedible flashy part of these drupes is usually removed for us before they hit our grocery stores shelves. We crack open the pit inside and eat the seed of these drupes. No wonder we use the term “nuts” to mean “crazy”!

62. Cuba’s capital : HAVANA
Havana is the capital city of Cuba. The city was founded by the Spanish in the early 1500s after which it became a strategic location for Spain’s exploration and conquest of the Americas. In particular, Havana was used as a stopping-off point for treasure-laden ships on the return journey to Spain.

72. Novices : TYROS
A tyro (also “tiro”) is a beginner or a novice. “Tyro” comes into English from Latin, in which “tiro” means “a recruit”.

Down
5. ___ Lanka : SRI
The island nation of Sri Lanka lies off the southeast coast of India. The name “Sri Lanka” translates from Sanskrit into English as “venerable island”. Before 1970, Sri Lanka was known as Ceylon, a name given to the country during British rule.

12. FedEx rival : UPS
United Parcel Service (UPS) is based in Sandy Springs, Georgia and has its own airline that operates out of Louisville, Kentucky. UPS often goes by the nickname “Brown”, because of its brown delivery trucks and brown uniforms.

23. Dance in which one partner might hold a rose between his teeth : TANGO
The dramatic dance called the tango originated in the late 1800s in the area along the border between Argentina and Uruguay. Dancers and orchestras from Buenos Aires in particular traveled to Europe and beyond in the early twentieth century and brought the tango with them. The tango craze first struck Europe in Paris in the 1910s, and from there spread to London and Berlin, crossing the Atlantic to New York in 1913.

27. Old-fashioned wine holder : FLAGON
A flagon is a large jug with a lid that is traditionally used for holding beer or wine.

30. Group of three : TROIKA
“Troika” is a Russian word meaning “set of three”. “Troika” can apply to a sled or carriage drawn by three horses, or to a folk dance between one man and two women. The term might also apply to a triumvirate of political leaders.

36. Ohio city that was once the Rubber Capital of the World : AKRON
For part of the 1800s, the Ohio city of Akron was the fasting growing city in the country, feeding off the industrial boom of that era. The city was founded in 1825 and its location, along the Ohio and Erie canal connecting Lake Erie with the Ohio River, helped to fuel Akron’s growth. Akron sits at the highest point of the canal and the name “Akron” comes from the Greek word meaning “summit”. Indeed, Akron is the county seat of Summit County. The city earned the moniker “Rubber Capital of the World” for most of the 20th century, as it was home to four major tire companies: Goodrich, Goodyear, Firestone and General Tire.

42. Labourite’s opponent, in British politics : TORY
“Tory” comes from the Irish word “tóraí” meaning “outlaw, robber”. The term “tory” was originally used for an Irish outlaw and later became a term of abuse for Irish rebels. At the end of the reign of King Charles II in Britain, there was a political divide with one side being called “Whigs” and the other “Tories”. Historically, the term “Tory” evolved to basically mean a supporter of the British monarchy, and today is used for a member of the British Conservative Party.

59. Sound to fear in the savanna : ROAR
A savanna (also “savannah”) is a grassland. If there are any trees in a savanna, by definition they are small and widely spaced so that light can get to the grasses allowing them to grow unhindered.

60. Currency of France or Italy : EURO
The Euro is the official currency of most of the states in the European Union, but not all. The list of states not using the Euro includes the UK, Denmark, Sweden and Norway.

61. When planes are due to take off, for short : ETDS
Estimated time of departure (ETD)

64. Biden and Pence, in brief : VPS
Vice President Joe Biden was a US Senator representing the state of Delaware from 1973 until he joined the Obama administration. While he was a senator, Vice President Biden commuted to Washington from Wilmington, Delaware almost every working day. He was such an active customer and supporter of Amtrak that the Wilmington Station was renamed as the Joseph R. Biden Railroad Station in 2011. Biden has made over 7,000 trips from that station, and the Amtrak crews were known to even hold the last train for a few minutes so that he could catch it. Biden earned himself the nickname “Amtrak Joe”.

65. Actor Holbrook : HAL
Hal Holbrook is an actor from Cleveland, Ohio. Although Holbrook is well known for many roles on the big and small screens, he is best known for a series of plays that he developed called “Mark Twain Tonight!”. Holbrook depicts Twain on stage giving recitations from several of Twain’s writings, varying the script for each performance. “Mark Twain Tonight!” was first performed in 1959, and Holbrook still appears in it today, well over 50 years later.