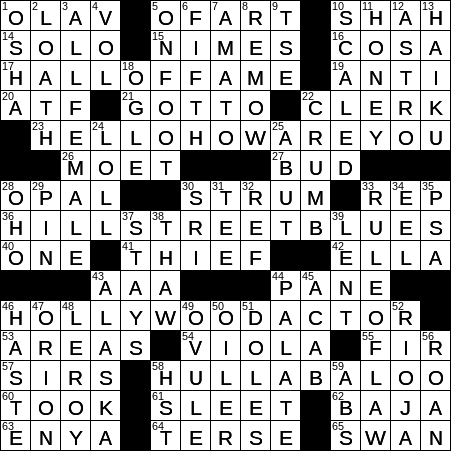 CROSSWORD SETTER: Brent Sverdloff & Michael Blake
THEME: Hall to Hull
Today’s themed answers start with four letters in the format HxLL, with x progressing through the vowels A through U:

17A. Rock and roll has one in Cleveland : HALL OF FAME
23A. Words of greeting : HELLO, HOW ARE YOU?
36A. 1980s cop show that TV Guide once ranked as the greatest TV drama of all time : HILL STREET BLUES
46A. James Earl Jones or Tommy Lee Jones : HOLLYWOOD ACTOR
58A. Ruckus : HULLABALOO

Today’s Wiki-est, Amazonian Googlies
Across
1. Name of five Norwegian kings : OLAV
Of the many kings of Norway named Olaf/Olav (and there have been five), Olaf II is perhaps the most celebrated as he was canonized and made patron saint of the country. Olaf II was king from 1015 to 1028 and was known as “Olaf the Big” (or Olaf the Fat) during his reign. Today he is more commonly referred to as “Olaf the Holy”. After Olaf died he was given the title of Rex Perpetuus Norvegiae, which is Latin for “Norway’s Eternal King”.

10. Former Iranian leader : SHAH
The last Shah of Iran was Mohammed-Reza Shah Pahlavi, as he was overthrown in the revolution led by the Ayatollah Khomeini in 1979. The post-revolution government sought the extradition of the Shah back to Iran while he was in the United States seeking medical care (he had cancer). His prolonged stay in the United States, recovering from surgery, caused some unrest back in Iran and resentment towards the United States. Some say that this resentment precipitated the storming of the US Embassy in Tehran and the resulting hostage crisis.

14. How Charles Lindbergh flew across the Atlantic : SOLO
Charles Lindbergh was the American pilot who made the first solo, non-stop flight across the Atlantic Ocean, a distance of nearly 3,600 miles. He won the accolades of a whole country for that feat, and was awarded the Medal of Honor (for which Lindbergh was eligible, as an Army Reserve officer). His new-found fame brought tragedy to his door, however, when a kidnapper took his infant son from his home in East Amwell, New Jersey. A ransom was paid in part, but the child was never returned, and was found dead a few weeks later. It was as a result of this case that Congress made kidnapping a federal offence should there be any aspect of the crime that crosses a state line.

15. French department capital known in Roman times as Nemausus : NIMES
Nîmes is a lovely city in the south of France. One of the claims to fame of the city is the invention of denim fabric. The French phrase “de Nimes” (from Nimes) gives us the word “denim”. Also, the French phrase “bleu de Genes” (blue of Genoa) gives us our word “jeans”.

16. ___ Nostra (crime group) : COSA
Apparently “Cosa Nostra” is the real name for the Italian Mafia. “Cosa Nostra” translates as “our thing” or “this thing of ours”. The term first became public in the US when the FBI managed to turn some members of the American Mafia. The Italian authorities established that “Cosa Nostra” was also used in Sicily when they penetrated the Sicilian Mafia in the 1980s. The term “mafia” seems to be just a literary invention that has become popular with the public.

17. Rock and roll has one in Cleveland : HALL OF FAME
The Rock and Roll Hall of Fame can be visited on the shores of Lake Erie in Cleveland, Ohio. The Rock and Roll Hall of Fame Foundation was created in 1983 and started inducting artists in 1986. The Foundation didn’t get a home until the museum was dedicated in Cleveland in 1995. The building looks fabulous in photos (I’ve never visited), and was designed by famed architect I. M. Pei.

26. Chandon’s partner in Champagne : MOET
Moët & Chandon is a French winery, one of the world’s largest producers of champagne. The company was founded by wine trader Claude Moët in 1743. The name was changed to Moët & Chandon in the 1830s when Pierre-Gabriel Chandon, an in-law to the Moët family, was given co-ownership. Moët & Chandon owns the famous Dom Pérignon brand name, honoring the Benedictine monk who did so much to improve the quality of champagne.

28. October birthstone : OPAL
Here is the “official” list of birthstones by month, that we tend to use today:

33. Dem.’s counterpart : REP
The Republican Party has had the nickname Grand Old Party (GOP) since 1875. That said, the phrase was coined in the “Congressional Record” as “this gallant old party”. The moniker was changed to “grand old party” in 1876 in an article in the “Cincinnati Commercial”. The Republican Party’s elephant mascot dates back to an 1874 cartoon drawn by Thomas Nast for “Harper’s Weekly”. The Democrat’s donkey was already an established symbol. Nast drew a donkey clothed in a lion’s skin scaring away the other animals. One of the scared animals was an elephant, which Nast labeled “The Republican Vote”.

42. Singer Fitzgerald : ELLA
Ella Fitzgerald, the “First Lady of Song”, had a hard and tough upbringing. She was raised by her mother alone in Yonkers, New York. Her mother died while Ella was still a schoolgirl, and around that time the young girl became less interested in her education. She fell in with a bad crowd, even working as a lookout for a bordello and as a Mafia numbers runner. She ended up in reform school, from which she escaped, and found herself homeless and living on the streets for a while. Somehow Fitzgerald managed to get herself a spot singing in the Apollo Theater in Harlem. From there her career took off and as they say, the rest is history.

46. James Earl Jones or Tommy Lee Jones : HOLLYWOOD ACTOR
James Earl Jones is noted for some very respected stage and film performances, but also for his wonderful voice. Jones had to overcome a stutter as a child, and decades later provided the voice for Darth Vader. James is the son of actor Robert Earl Jones.

Tommy Lee Jones is an actor from San Saba, Texas. Relatively recently, Jones received much acclaim for an excellent supporting performance as Congressman Thaddeus Stevens in “Lincoln”. However, my favorite of Jones’s performances were in 1993’s “The Fugitive” and in 2012’s “Hope Springs” opposite Meryl Streep.

58. Ruckus : HULLABALOO
Our word “hullabaloo” meaning a “commotion” is a derivative of an older term “hollo-ballo”. “Hollo-ballo” was a word used for an uproar in the north of England and Scotland.

The word “ruckus” is used to mean a commotion, and has been around since the late 1800s. “Ruckus” is possibly a melding of the words “ruction” and “rumpus”.

61. Freezing rain : SLEET
Apparently “sleet” is a term used to describe two weather conditions. One is a shower of ice pellets, smaller than hail, and the second is a mixture of rain and snow, with the snow melting as it falls.

62. Mexico’s ___ California : BAJA
Baja California is both the most northern and the most western of the Mexican states. The name translates from Spanish as “Lower California”.

63. One-named New Age singer : ENYA
Enya’s real name is Eithne Ní Bhraonáin, which can translate from Irish into Enya Brennan. Her Donegal family (in the northwest of Ireland) formed a band called Clannad, which included Enya. In 1980 Enya launched her very successful solo career, eventually becoming Ireland’s best-selling solo musician. And, she sure does turn up a lot in crosswords!

65. What the Ugly Duckling became : SWAN
Hans Christian Andersen’s tale “The Ugly Duckling” has to be one of the most endearing ever written. Unlike so many “fairy tales”, “The Ugly Duckling” isn’t based on any folklore and simply a product of Andersen’s imagination. It is speculated that Andersen was the illegitimate son of the Crown Prince of Denmark, and that he wrote the story of the ugly duckling that turned into a beautiful swan as a metaphor for the secret royal lineage that was within Andersen himself.

Down
1. Worker protection org. : OSHA
The Occupational Safety and Health Administration (OSHA) was created in 1970 during the Nixon administration. OSHA regulates workplaces in the private sector and regulates just one government agency, namely the US Postal Service.

9. China’s Mao ___-tung : TSE
Mao Zedong (also “Mao Tse-tung”) was born on December 16, 1893 in the Hunan Province of China. As Mao was the son of a peasant farmer, his prospects for education were limited. Indeed he left school at age 13 to work on the family farm but did eventually get to secondary school in Changsha, the provincial capital. In the years following, Mao continued his education in Beijing and actually turned down an opportunity to study in France.

12. Houston player : ASTRO
The Houston baseball team changed its name to the Astros (sometimes “’Stros”) from the Colt .45s in 1965 when they started playing in the Astrodome. The Astrodome was so called in recognition of the city’s long association with the US space program. The Astros moved from the National League to the American League starting in the 2013 season.

13. Poem like “The swallow flies up / Into a blue evening sky, / Summer’s small herald” : HAIKU
A haiku is a very elegant form of Japanese verse. When writing a haiku in English we tend to impose the rule that the verse must contain 17 syllables. This restriction comes from the rule in Japanese that the verse must contain 17 sound units called “moras”, but moras and syllables aren’t the same thing. What the difference is though, is not so clear to me. Here’s an example of a Haiku:

30. ___ Lanka : SRI
The island nation of Sri Lanka lies off the southeast coast of India. The name “Sri Lanka” translates from Sanskrit into English as “venerable island”. Before 1970, Sri Lanka was known as Ceylon, a name given to the country during British rule.

47. Heavenly hunter : ORION
The very recognizable constellation of Orion is named for the Greek God Orion, the Hunter. If you take a look at the star in Orion’s “right shoulder”, the second brightest star in the constellation, you might notice that it is quite red in color. This is the famous star called Betelgeuse, a red supergiant, a huge star that is on its way out. Betelgeuse is expected to explode into a supernova within the next thousand years or so. You don’t want to miss that …

50. Houston player, once : OILER
The Houston Oilers were an AFL charter team, founded in 1960. The team moved to Tennessee in 1997, and became the Tennessee Titans in 1999.

52. Spanish wine region, with “La” : RIOJA
Rioja wines come from the province of La Rioja in Northern Spain. In my days living back in Europe, Rioja wines were noted for their heavy oaky flavors and it wasn’t uncommon to order a “rough Rioja” when out for dinner of an evening.

56. Horse whose coat is sprinkled with white hairs : ROAN
A roan horse has an even mixture of white and colored hairs on the body with the head, lower legs, mane and tail having a more solid color.

58. F.D.R.’s successor : HST
The letter “S” in the middle of the name Harry S. Truman (HST) doesn’t stand for anything. The future-president was named “Harry” in honor of his mother’s brother Harrison “Harry” Young. The initial “S” was chosen in honor of young Harry’s two grandfathers: Anderson S-hipp Truman and S-olomon Young.

59. “Six-pack” muscles : ABS
The abdominal muscles (abs) are more correctly referred to as the rectus abdominis muscles. They are all called a “six-pack” in a person who has developed the muscles and who has low body fat. In my case, more like a keg …