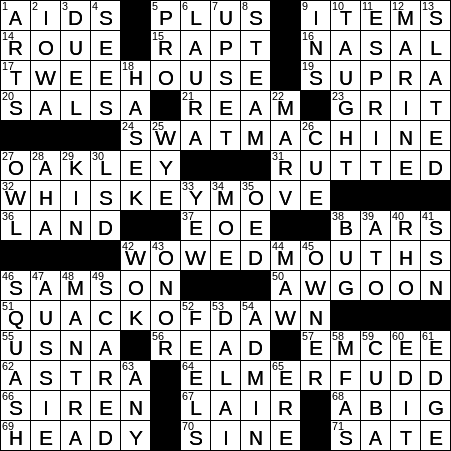 Today’s themed answers are common phrases written as though they’re being spoken by cartoon character Elmer Fudd, with a heavy lisp:

Today’s Wiki-est, Amazonian Googlies
Across
14. Licentious man : ROUE
“Roue” is a lovely word, I think, describing a less than lovely man. A roue could otherwise be described as a cad, someone of loose morals. “Roue” comes from the French word “rouer” meaning “to break on a wheel”. This describes the ancient form of capital punishment where a poor soul was lashed to a wheel and then beaten to death with cudgels and bars. I guess the suggestion is that a roue, with his loose morals, deserves such a punishment.

19. Bygone Toyota sports car : SUPRA
The Supra is a sporty car made by Toyota from 1979 to 2002. The Supra is in effect a longer and wider Celica.

24. Device for killing mosquitoes? : SWAT MACHINE (from “slot machine”)
Mosquito is the Spanish for “little fly”. The female mosquito actually has to have a “blood meal” before she is able to lay her eggs.

27. Annie who was nicknamed “Little Sure Shot” : OAKLEY
Many regard Annie Oakley as the first American female superstar, given her celebrity as a sharpshooter in Buffalo Bill’s Wild West Show. She toured with the show all over Europe, and performed her act for the likes of Queen Victoria of England and Kaiser Wilhelm II of Germany. Supposedly, using a .22 caliber rifle from 90 feet away, Oakley could split a playing card edge-on, and shoot five or six holes in the card before it hit the ground!

38. Stars and ___ (Confederate flag) : BARS
The first official flag of the Confederacy was known as the Stars and Bars. The flag was designed by a Prussian artist and is similar to the Austrian flag of the day as it contains three bars, two of which are red and one white. The flag includes a blue square containing a ring of stars. Each star represents a state in the Confederacy. The Stars and Bars flag was officially adopted on 4 March 1861 and first flew over the dome of the Capitol Building in Montgomery, Alabama.

46. Delilah was his undoing : SAMSON
Delilah is a Biblical figure, the wife of Samson. Delilah was engaged by the Philistines to betray her husband by determining the secret of his great strength. Samson lied to his wife three times, but on the fourth asking he told his wife the truth, that he did not cut his hair. Delilah then persuaded Samson to shear his locks and so allowed him to be captured by his enemies. Over the centuries, it has been usual to depict Delilah actually cutting off her husband’s hair, but the Bible actually says that she allowed a man to do the deed while Samson was sleeping.

55. Sch. for future admirals : USNA
The United States Naval Academy (USNA) is located in Annapolis, Maryland. The USNA was founded in 1845 and educates officers for both the US Navy and the US Marine Corps. The motto of the USNA is “Ex Scientia Tridens”, which translates as “From Knowledge, Sea Power”.

57. Host at a roast : EMCEE
The term “emcee” comes from “MC”, an initialism standing for Master or Mistress of Ceremonies.

62. “Ad ___ per aspera” (Kansas’ motto) : ASTRA
The motto of the State of Kansas is “ad astra per aspera”, a Latin expression meaning “to the stars through difficulties”. Kansas shares the same motto with quite a few other institutions, including an English grammar school, an Australian high school, and even Starfleet, the service to which the USS Enterprise belongs in the “Star Trek” series.

64. Archenemy of Bugs Bunny … who might say things like 17-, 24-, 32-, 42- and 51-Across : ELMER FUDD
Elmer Fudd is one of the most famous of all the Looney Tunes cartoon characters, the hapless nemesis of Bugs Bunny. If you have never seen it, check out Elmer and Bugs in the marvelous “Rabbit of Seville”, a short cartoon that parodies Rossini’s “Barber of Seville”. Wonderful stuff …

71. Leave completely filled : SATE
“Sate” is a variant of the older word “satiate”. Both terms can mean either to satisfy an appetite fully, or to eat to excess.

Down
2. Des Moines’s home : IOWA
The city of Des Moines is the capital of Iowa, and takes its name from the Des Moines River. The river in turn takes its name from the French “Riviere des Moines” meaning “River of the Monks”. It looks like there isn’t any “monkish” connection to the city’s name per se. “Des Moines” was just the name given by French traders who corrupted “Moingona”, the name of a group of Illinois Native Americans who lived by the river. However, others do contend that French Trappist monks, who lived a full 200 miles from the river, somehow influenced the name.

6. Advice-giving “Dr.” of radio : LAURA
According to Dr. Laura Schlessinger herself, her radio show “preaches, teaches, and nags about morals, values and ethics.”

8. Sauna feature : STEAM
As my Finnish-American wife will tell you, “sauna” is a Finnish word, and is correctly pronounced “sow-nah” (with “sow” as in the female pig).

9. Shoo-___ (overwhelming favorites) : INS
A “shoo-in” is a surefire winner, especially in politics. Back in the 1920s, a shoo-in was a horse that was prearranged to win a race, a race that was fixed.

11. ___ de corps : ESPRIT
“Esprit de corps” is the morale of a group, best translated from French perhaps as “team spirit”.

12. Jarhead : MARINE
Marines are called jarheads because of their high and tight regulation haircuts, at least that’s the story I read …

25. Letter before zee : WYE
In the alphabet, the letter Y (wye) comes right before the letter Z (zee).

27. ___ exams (tests at the end of a student’s fifth year at Hogwarts) : OWL
In J.K. Rowling’s “Harry Potter” universe, The Hogwarts School of Witchcraft and Wizardry was founded by the four most brilliant witches and wizards of their time: Godric Gryffindor, Helga Hufflepuff, Rowena Ravenclaw and Salazar Slytherin. Each of the founders lent their name to a House in the school, i.e. Gryffindor, Hufflepuff, Ravenclaw and Slytherin.

28. “Eureka!” : AHA!
“Eureka” translates from Greek as “I have found it”. The word is usually associated with Archimedes, uttered as he stepped into his bath one day. His discovery was that the volume of water that was displaced was equal to that of the object (presumably his foot) that had been submerged. He used this fact to determine the volume of a crown, something he needed in order to determine if it was made of pure gold or was a forgery.

30. “Acid” : LSD
LSD (known colloquially as “acid”) is short for lysergic acid diethylamide. A Swiss chemist called Albert Hofmann first synthesized LSD in 1938 in a research project looking for medically efficacious ergot alkaloids. It wasn’t until some five years later when Hofmann ingested some of the drug accidentally that its psychedelic properties were discovered. Trippy, man …

33. Wood for archery bows : YEW
Yew is the wood of choice for the longbow, a valued weapon in the history of England. The longbow is constructed with a core of yew heartwood (as the heartwood resists compression) that has a sheath of yew sapwood (as the sapwood resists stretching). The yew was in such demand for longbows that for centuries yew trees were in short supply in Britain and the wood had to be imported from all over Europe.

34. One of the Stooges : MOE
Moe Howard was the stage name of Moses Harry Horwitz. Howard was one of the Three Stooges. In 1925, he married Helen Schonberger, who was a cousin of Harry Houdini.

38. Software problem : BUG
Back in 1947, the famed computer programmer Grace Hopper noticed some colleagues fixing a piece of equipment by removing a dead moth from a relay. She remarked that they were “debugging” the system, and so Hopper has been given credit for popularizing the term.

40. Letter before sigma : RHO
Rho is the Greek letter that looks just like our Roman letter “p”, although it is equivalent to the Roman letter R.

42. Stir-fry vessel : WOK
“Wok” is a Cantonese word, the name for the frying pan now used in many Asian cuisines.

46. Racket sport : SQUASH
Squash is a racquet sport that is similar to the more common racquetball (more common here in the US, I think). The game is derived from the older sport of racquets. It was originally called squash racquets as the ball used is very, very squashable and much softer than that used in the parent game.

47. Sydneysider, for one : AUSSIE
Sydney is the most populous city in Australia. People from Sydney are known as “Sydneysiders”.

48. Words said over and over : MANTRA
A “mantra” is a word that is used as a focus for the mind while meditating. The term is Sanskrit in origin, and is now used figuratively in English to describe any oft-repeated word or phrase.

53. ___ Lama : DALAI
The Dalai Lama is a religious leader in the Gelug branch of Tibetan Buddhism. The current Dalai Lama is the 14th to hold the office. He has indicated that the next Dalai Lama might be found outside of Tibet for the first time, and may even be female.

59. Country with which the U.S. re-established diplomatic relations in 2015 : CUBA
Cuba is the largest island in the Caribbean. The exact etymology of the name “Cuba” seems a little unclear. Most believe “Cuba” to be derived from the Taíno terms for “where fertile land is abundant” (cubao) or “great place” (coabana).