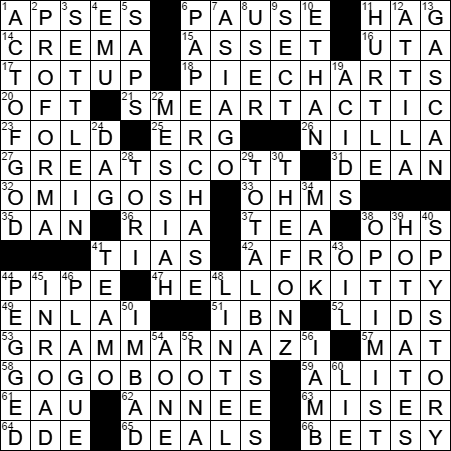 Today’s Wiki-est, Amazonian Googlies
Across
1. Areas where clerics are seated : APSES
The apse of a church or cathedral is a semicircular recess in an outer wall, usually with a half-dome as a roof and often where there resides an altar. Originally, apses were used as burial places for the clergy and also for storage of important relics.

11. Beldam : HAG
A beldam is an old woman, especially an ugly one. The term was originally used for a grandmother. In Old English, the prefix “bel-” is used to express a relationship (as in “grandmother”), and “dam” is used in the sense of “mother”.

14. Thin layer of foam at the top of an espresso : CREMA
Espresso is made by forcing extremely hot water, under pressure, through finely ground coffee beans. The result is a thick and concentrated coffee drink, which contains quite a lot of solids and a lot of foam. An espresso machine was first patented in 1884 in Italy, although it was a machine to make the beverage in bulk. The first patent for a machine that made individual measures was applied for in 1901, also in Italy.

16. The Jazz, on sports tickers : UTA
The Utah Jazz professional basketball team moved to their current home in Salt Lake City in 1979. As one might guess from the name, the team originated in New Orleans, but only played there for five seasons. New Orleans was a tough place to be based because venues were hard to come by, and Mardi Gras forced the team to play on the road for a whole month.

18. Business circles? : PIE CHARTS
A “pie chart” can also be referred to as a “circle graph”. It is often stated that Florence Nightingale invented the pie chart. While this is not in fact true, she is due the credit for popularizing it, and for developing the pie chart variation known as the polar area diagram. The earliest known pie chart appears in a book published in 1801 by Scottish engineer William Playfair.

25. Bit of work : ERG
An erg is a unit of mechanical work or energy. It is a small unit, as there are 10 million ergs in one joule. it has been suggested that an erg is about the amount of energy required for a mosquito to take off. The term comes from “ergon”, the Greek word for work.

26. Brand that’s a shortened description of its flavor : NILLA
As one might expect, “Nilla” is a shortened form of “vanilla”. However, you won’t find any vanilla in Nilla brand cookies or wafers. They have always been flavored with vanillin, which is synthetic vanilla. Is nothing sacred …?

27. “Heavens to Murgatroyd!” : GREAT SCOTT!
No one seems to know for sure who the Scott is in the exclamation “great Scott!”. One theory is that the reference is to the commander-in-chief of the US Army during the Civil War, General Winfield Scott. Scott weighed in at 300 pounds later in his life, and was so obese that he could not ride a horse.

Remember the catchphrase made famous by the cartoon character Snagglepuss, “Heavens to Murgatroyd!”? Snagglepuss stole that line from a 1944 movie called, “Meet the People” in which it was first uttered by none other than Bert Lahr, the actor who played the cowardly lion in “The Wizard of Oz”.

31. James, Jimmy or John : DEAN
In his short life, James Dean starred in three great movies: “East of Eden”, “Rebel Without a Cause” and “Giant”, for which he received two posthumous Best Actor Oscar nominations (the only person to do so). On a fateful day in September 1955, Dean set off in Porsche for a race in Salinas, California. While driving to the race he was given a speeding ticket. Two hours later Dean was involved in a near head-on collision and was pronounced dead on arrival at a hospital in Paso Robles, California.

The Jimmy Dean brand of sausage was introduced in 1969 by singer and actor Jimmy Dean. Although he was at the height of his singing and acting career in 1950s and 1960s, I best remember Dean for playing reclusive billionaire Willard Whyte in the 1971 James Bond film “Diamonds Are Forever”.

John Dean was White House Counsel in the Nixon administration, and someone who was deeply embroiled in the Watergate scandal. Dean pleaded guilty to obstruction of justice in the resulting trial and became a key witness for the prosecution. Dean served only four months in jail, which was time already served of a one-to-four years sentence in a minimum-security prison.

33. Omegas represent them : OHMS
The unit of electrical resistance is the ohm (with the symbol omega) named after German physicist Georg Simon Ohm. Ohm was the guy who established experimentally that the amount of current flowing through a circuit is directly proportional to the voltage applied, (V=IR) a relationship that every schoolkid knows as Ohm’s Law.

35. Savage of “Savage Love” : DAN
Dan Savage is an author and journalist who is famous for writing a sex advice column under the title “Savage Love”. “Savage Love” is directed towards the gay community and is syndicated in several dozen newspapers across the world.

38. Post cereal with an apostrophe in its name : OH’S
There used to be two varieties of Oh’s made by Quaker Oats Company. One was Honey Nut Oh’s, later known as Crunchy Nut Oh’s, but it was phased out. The second type was called Crunchy Graham Oh’s, and it is still available today as Honey Graham Oh’s.

47. Toon who wears a red hair bow : HELLO KITTY
Hello Kitty is a female bobtail cat, a character and a brand name launched in 1974 by the Japanese company Sanrio. Folks can overpay for stationary, school supplies and fashion accessories with the Hello Kitty character emblazoned thereon.

49. Zhou ___ : ENLAI
Zhou Enlai (also “Chou En-Lai”) was the first government leader of the People’s Republic of China and held the office of Premier from 1949 until he died in 1976. Zhou Enlai ran the government for Communist Party Leader Mao Zedong, often striking a more conciliatory tone with the West than that of his boss. He was instrumental, for example, in setting up President Nixon’s famous visit to China in 1972. Zhou Enlai died just a few months before Mao Zedong, with both deaths leading to unrest and a dramatic change in political direction for the country.

53. Type for who this clue will be annoying? : GRAMMAR NAZI
Yep, I cringed when I saw “who” in the clue instead of “whom”. I’m a bad person …

58. Iconic part of Nancy Sinatra’s early attire : GO-GO BOOTS
The original go-go boot from the sixties comes to the knee and has a low heel. Prior to the sixties, boots really weren’t worn much by women other than as protection against bad weather. Now they are a fashion statement.

59. Kennedy colleague : ALITO
Associate Justice Samuel Alito was nominated to the US Supreme Court by President George W. Bush. Alito is the second Italian-American to serve on the Supreme Court (Antonin Scalia was the first). Alito studied law at Yale and while in his final year he left the country for the first time in his life, heading to Italy to work on his thesis about the Italian legal system.

Associate Justice Anthony Kennedy of the US Supreme Court was appointed by President Reagan in 1988. Although Justice Kennedy’s decisions are viewed as largely conservative, after Sandra Day O’Connor has retired he has been considered by many as the “swing vote” on the court.

64. Pres. whose given birth name was David : DDE
Future US president Eisenhower was born in Denison, Texas in 1890 and given the name David Dwight, but by the time he made it to the White House he was going by the name Dwight D. Eisenhower (DDE). Growing up, his family called him Dwight, and when “Ike” enrolled in West Point he himself reversed the order of his given names.

Down
2. Perfunctory : PRO FORMA
The Latin term “pro forma” translates as “as a matter of form”, and is used in English to describe actions or documents that are considered merely a formality. In the world of accounting, a pro forma financial statement indicates hypothetical figures based on previous operations, and are as estimates before actual results become available.

4. Producer of a deep drumming call : EMU
The large flightless birds called emus make sounds by manipulating inflatable necks sacs. The sac is about a foot long, has a thin wall and allows the bird to emit a booming sound. The type of sound emitted is the easiest way to differentiate between male and female emus.

5. Boobs : SAPS
“Sap” is slang for a fool, someone easily scammed. The term arose in the early 1800s in Britain when it was used in “saphead” and “sapskull”. All these words derive from “sapwood”, which is the soft wood found in tree trunks between the bark and the heartwood at the center.

7. Pungent cheese : ASIAGO
Asiago is a crumbly cheese that is named for the region in northeastern Italy from where it originates.

12. Verdi opera based on a historic invader : ATTILA
Giuseppe Verdi’s opera “Attila” is based on the play “Attila, King of the Huns” written by Friedrich Werner. The opera premiered in 1846 in Venice.

24. Nobelist Hammarskjöld : DAG
Dag Hammarskjold was the second secretary-general of the United Nations, right up until his death in a plane crash in Rhodesia in 1961. The crash was considered suspicious at the time as the bodyguards were found to have bullet wounds when they died, but this was put down to bullets exploding in the fire after the crash.

30. Shark-jumping sitcom character : THE FONZ
The phrase “jumping the shark” has been used since 1977 to describe the moment in the life of a TV show when it starts to decline in popularity. The expression comes from a scene in the hit sitcom “Happy Days” when the character Fonzie gets on water skis and is seen literally jumping over a shark. “Happy Days” never recovered.

38. Bull, essentially : OPTIMIST
The terms “bull” and “bear” markets come from the way in which each animal attacks. A bull thrusts his horns upwards (an “up” market), whereas a bear swipes with his paws downward (a “down” market).

43. One may be essential : OIL
Essential oils are concentrated liquids containing volatile chemical compounds that have a smell or odor. The term “essential” oil comes from the fact that it contains the “essence” of a plant’s fragrance.

48. Doorframe part : LINTEL
A lintel is a structural beam that spans an opening in a wall, usually a door or a window.

55. Author Jaffe : RONA
Rona Jaffe was an American novelist perhaps most famous for two of her books, “The Best of Everything” and “Mazes and Monsters”. “The Best of Everything” was published in 1958 and has been compared with the HBO television series “Sex and the City” as it depicts women in the working world. “Mazes and Monsters” was published in 1981 and explores a role-playing game similar to Dungeons & Dragons and the impact it has on players.

56. Foot type : IAMB
An iamb is a metrical foot containing an unstressed syllable followed by a stressed syllable. Robert Frost’s “Stopping by the Woods on a Snowy Evening” consists of lines made up of four sequential iambs e.g. “Whose woods / these are / I think / I know”. With a sequence of four iambs, the poem’s structure is described as iambic tetrameter.