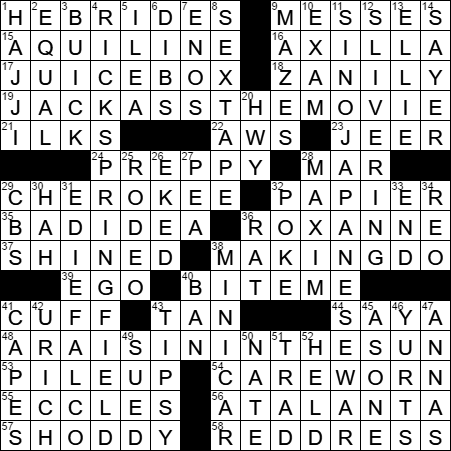 Today’s Wiki-est, Amazonian Googlies
Across
1. Skye, the Small Isles, etc. : HEBRIDES
The Hebrides is a group of islands just off the west coast of Scotland. The Hebrides are divided into two main groups: the Inner and Outer Hebrides.

16. Armpit, to a doctor : AXILLA
“Axilla” is the anatomical name for armpit, not to be confused with “maxilla”, the upper jawbone.

18. With wacky irreverence : ZANILY
Something described as “zany” is clownish and bizarre. “Zany” can also be a noun, a term used for a clown or a buffoon. The original noun was “Zanni”, a Venetian dialect variant of Gianni, short for Giovanni (John). Zanni was a character who appeared in comedy plays of the day, and was someone who aped the principal actors.

19. 2002 “documentary” with “Don’t try this at home” contents : JACKASS THE MOVIE
“Jackass” is a reality show that originally aired on MTV from 2000 to 2001. The show features a group of men doing stunts in which they usually get injured to some extent. The leader of the group is called Johnny Knoxville, who appears in the stunts and who also created the show. Not my cup of tea …

24. Like an ascot, perhaps : PREPPY
An Ascot tie is a horrible-looking (I think!), wide tie that narrows at the neck, which these days is only really worn at weddings. The tie takes its name from the Royal Ascot horse race at which punters still turn up in formal wear at Ascot Racecourse in England.

29. Jeep model : CHEROKEE
The Jeep Cherokee is an SUV with some legs. The original SJ model was produced from 1974 until 1983, with derivative models very much alive today.

39. Psychological mediator : EGO
Sigmund Freud created a structural model of the human psyche, breaking it into three parts: the id, the ego, and the super-ego. The id is that part of the psyche containing the basic instinctual drives. The ego seeks to please the id by causing realistic behavior that benefits the individual. The super-ego almost has a parental role, contradicting the id by introducing critical thinking and morals to behavioral choices.

48. Hit 1959 Broadway play starring Sidney Poitier : A RAISIN IN THE SUN
“A Raisin in the Sun” is a 1961 film starring Sidney Poitier that is based on a 1959 play of the same name by Lorraine Hansberry. The film follows the lives of an African-American family from Chicago as they struggle with the decision about what to do with an insurance payout following the death of the family’s patriarch.

The Hollywood actor Sidney Poitier was born in Miami, but grew up in the Bahamas. Poitiers breakthrough role in movies came with 1955’s “Blackboard Jungle”, in which he played an incorrigible high school student. I find it interesting that one of Poitier’s most respected performances found him playing a teacher of a rough set of students in 1967’s “To Sir, with Love”. Off the screen, Poitier entered the diplomatic service for the Bahamas, serving as the nation’s non-resident ambassador to Japan from 1997 until 2007.

55. Book after Proverbs: Abbr. : ECCLES
Ecclesiastes is a book in the Hebrew Bible and in the Old Testament. The term “ecclesiastes” is usually translated as “teacher” or “preacher”, although a more literal translation is “gatherer”.

56. Only woman aboard the Argo, it’s said : ATALANTA
In Greek mythology, Atalanta was a virgin huntress who had no interest in getting married, despite the urging of her father. Atalanta had several suitors, and eventually agreed to a foot race with them. The terms were that if she won the race, she need not marry. If she lost the race, she would marry the winner. Atalanta managed to outrun the field, except for Hippomenes. Hippomenes emerged victorious due to cunning rather than speed.

58. “Jezebel” costume : RED DRESS
“Jezebel” is a movie starring Bette Davis and Henry Fonda released in 1938. Davis plays a headstrong young Southern woman who breaks societal rules by brazenly wearing a red dress at a lavish ball, instead of the white dress “required” for single women. That one act of rebellion is sufficent for her fiancé (played by Fonda) to break the engagement. Some say that Davis was offered the part in “Jezebel” as compensation for losing out to Vivien Leigh for the role of Scarlett O’Hara in “Gone with the Wind”.

Ahab was a King of Israel, but the power behind his throne was his wife Jezebel, a Phoenician princess. Jezebel’s god was Ba’al, and she used her influence to get temples of Ba’al built in Israel. Jezebel’s name is still associated with the worship of false prophets, and the term “jezebel” can be used to describe a wicked, shameless woman.

Down
1. Faithful pilgrim : HAJJI
A Haji (also “Hajji”) is the term used for someone who has made a pilgrimage to Mecca, and it is sometimes also used as a form of address for such a person. The journey itself goes by the name “haj” or “hajj”.

The daytime soap opera “General Hospital” is the longest running such drama still in production in the US, and is second-longest running soap in the world (the UK’s famous “Coronation Street” heads the list).

5. Guts, in part : ILEA
The human ileum (plural “ilea”) is the lowest part of the small intestine, found below the jejunum and above the cecum of the large intestine.

6. “Mine!” : DIBS!
The phrase “to have dibs on” expresses a claim on something. Apparently, the term “dibs” is a contraction of “dibstone”, which was a knucklebone or jack used in a children’s game.

7. Slaughter of the Cardinals : ENOS
Enos Slaughter has a remarkable playing record in Major League Baseball over a 19-year career. Slaughter’s record is particularly remarkable given that he left baseball for three years to serve in the military during WWII.

9. Achievements in large-scale topiary : MAZES
Topiary is the practice of training and clipping perennial plants into clearly defined shapes.

11. Historic conflict in and around the Yellow Sea : SINO-JAPANESE WAR
There were two Sino-Japanese Wars. The first was fought in 1894-95 over control of Korea. The second was fought between 1931 and 1945, eventually becoming part of WWII.

14. Leo with the 1977 #1 hit “When I Need You” : SAYER
Leo Sayer is a British singer who was big in the seventies with hits such as “You Make Me Feel Like Dancing” and “When I Need You”. Sayer now lives in Australia.

20. Any I, e.g.: Abbr. : HWY
The US Interstate System is more correctly known as the Dwight D. Eisenhower National System of Interstate and Defense Highways, a nod to President Eisenhower who championed the construction. The President had come to recognise the value of the German autobahn system in his experiences during WWII, and resolved to give the US a similar infrastructure. In real terms, the US Interstate construction project is said to have been the largest public works project since the Pyramids of Egypt.

25. What may involve the calf muscles? : RODEO
“Rodeo” is a Spanish word that is usually translated as “round up”.

28. Saw : MAXIM
A “saw” is an old saying, one that is often repeated and is very familiar. The term “old saw” is actually a tautology, as by definition a “saw” is “old”.

32. Slow sort, informally : POKE
Back in the early 1800s, a “poke” was a device attached to domestic animals such as pigs or sheep to keep them from escaping their enclosures. The poke was like a yoke with a pole, and slowed the animal down, hence the term “slowpoke”.

33. Patootie : END
Back in the 1920s, the term “patootie” was used for a sweetheart, a very pretty girl. Somehow, the term has evolved into slang for the posterior, rear end.

34. ___ Motors, old Lansing manufacturer : REO
The REO Motor Company was founded by Ransom Eli Olds (hence the name REO). The company made cars, trucks and buses, and was in business from 1905 to 1975 in Lansing, Michigan. Among the company’s most famous models were the REO Royale and the REO Flying Cloud.

43. A little tight : TIPSY
The term “tipsy” comes from the verb “to tip” meaning “to overturn, knock over”, and has been meaning “drunk” since the late 1500s.

46. Round abodes : YURTS
A “yurt” is a wood-framed dwelling that is used by nomads in the steppes of Central Asia. Although a yurt is a substantial structure, it is also extremely portable.

47. Dancer Pavlova and others : ANNAS
Anna Pavlova was a Russian ballerina who performed in the late 1800s and early 1900s. Pavlova became so successful that she was the first ballerina to pull together her own company and tour the world. Her most famous role was “The Dying Swan” that she danced to the beautiful “Le cygne” from Saint-Saëns’ “Carnival of the Animals”. Pavlova eventually left Russia for good and settled in England.

50. ___ the Great of children’s literature : NATE
The “Nate the Great” series of children’s novels was written (mainly) by Marjorie Sharmat. Nate is like a young Sherlock Holmes, with a dog for a sidekick called Sludge. Some of the books have been adapted for television.