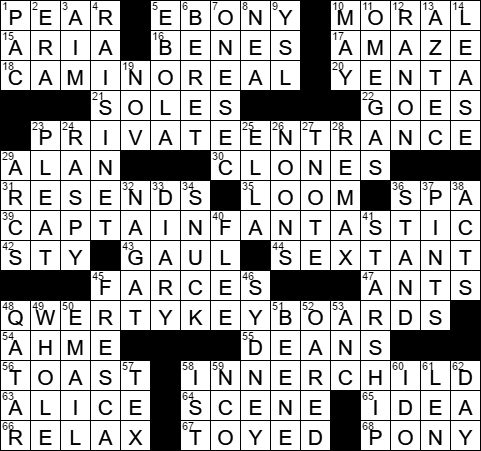 CROSSWORD CONSTRUCTOR: Peter Gordon
THEME: Inner Child
Each of today’s themed answers includes a hidden (INNER) word that is a synonym of CHILD:

Today’s Wiki-est, Amazonian Googlies
Across
5. Black wood : EBONY
Ebony is another word for the color black (often shortened to “ebon” in poetry). Ebony is a dark black wood that is very dense, one of the few types of wood that sinks in water. Ebony has been in high demand so the species of trees yielding the wood are now considered threatened. It is in such short supply that unscrupulous vendors have been known to darken lighter woods with shoe polish to look like ebony, so be warned …

16. Elaine’s last name on “Seinfeld” : BENES
The character Elaine Benes, unlike the other lead characters (Jerry, Kramer and George), did not appear in the pilot episode of “Seinfeld”. NBC executives specified the addition of a female lead when they picked up the show citing that the situation was too “male-centric”.

18. Historic California route, with “El” : CAMINO REAL (inner “minor”)
El Camino Real is the Spanish for “The Royal Road”. It was the name given to many roads in the Americas that connected different Spanish settlements. The name El Camino Real persists to this day in many parts of the United States. There’s one just down the road from me in the Bay area.

“To schmooze” is to chat intimately, a word that comes from the Yiddish “schmusen” meaning ‘to chat” .

29. Mathematician Turing who was the subject of “The Imitation Game” : ALAN
Alan Turing was an English mathematician. He was deservedly well-respected for his code-breaking work during WWII at Bletchley Park in England. However, despite his contributions to cracking the German Enigma code and other crucial work, Turing was prosecuted for homosexuality in 1952. He agreed to chemical castration, treatment with female hormones, and then two years later he committed suicide by taking cyanide. Turing’s life story is told in the 2014 film “The Imitation Game” with Benedict Cumberbatch playing the lead. I thoroughly enjoyed that film …

39. 2016 film for which Viggo Mortensen earned an Oscar nomination : CAPTAIN FANTASTIC (inner “infant”)
Viggo Mortensen is a Danish-American actor who is famous for playing Aragorn in “The Lord of the Rings” movies. Mortensen was born in New York City and lived for periods in the US and periods in Denmark when he was younger. He is fluent in English, Danish and also Spanish.

43. Ancient France : GAUL
The Gauls were a Celtic race, with Gaul covering what is now known as France and Belgium. We use the term “Gallic” today, when we refer to something pertaining to France or the French.

45. Many Monty Python skits : FARCES
A “farce” is a comedy play that features an exaggerated and improbable storyline, with lots of physical humor. I love a good farce …

48. Common computer peripherals : QWERTY KEYBOARDS (inner “tyke”)
“Tyke” has been used playfully to describe a young child since at least 1902, but for centuries before that a tyke was a cur or mongrel, or perhaps a lazy or lower-class man.

56. “Here’s to the newlyweds!,” e.g. : TOAST
The tradition of “toasting” someone probably dates back to the reign of Charles II, when the practice was to drink a glass of wine to the health of a beautiful or favored woman. In those days, spiced toast was added to beverages to add flavor, so the use of the word “toast” was an indicator that the lady’s beauty would enhance the wine. Very charming, I must say …

63. Wonderland girl : ALICE
Lewis Carroll wrote “Alice’s Adventures in Wonderland” in 1865, and the sequel called “Through the Looking-Glass, and What Alice Found There” in 1871. Because in the second adventure Alice went through a looking glass, the themes were deliberately chosen to be mirror images of the themes in “Wonderland”. Whereas “Wonderland” begins indoors, is set in summer, and uses playing card imagery, “Looking Glass” begins out of doors, is set in winter and uses images from the game of chess.

68. Polo mount : PONY
The sport of polo originated in Iran, possibly before the 5th century BC. Polo was used back them primarily as a training exercise for cavalry units.

Down
1. “Super” group buying campaign ads : PAC
A Political Action Committee (PAC) is a private group that works to influence the outcome of a particular election or group of elections. Any group becomes a PAC by law when it receives or spends more than $1,000 for the purpose of influencing the outcome of an election. In 2010 the Supreme Court ruled that PACS that did not make direct contributions to candidates or parties could accept unlimited contributions. These “independent, expenditure-only committees” are commonly referred to as “super PACs”.

5. Virus in 2014 news : EBOLA
The Ebola virus causes a very nasty form of hemorrhagic fever. The name of the virus comes from the site of the first known outbreak, in a mission hospital in the Ebola River Valley in the Democratic Republic of the Congo (then known as Zaire). The disease is transmitted from human to human by exposure to bodily fluids. In nature, the main carrier of Ebola is the fruit bat.

6. Special Forces cap : BERET
The US Army Special Forces are known as the Green Berets because they wear … green berets. The Green Beret is also worn by the Royal Marines of the British Army. When US Army Rangers and OSS operatives were trained by the Royal Marines in Scotland during WWII, graduates of the gruelling training program were awarded green berets by their British instructors. The US soldiers, although proud of their new headgear, were not allowed to wear it as part of their uniform. They had to wait until 1961, when President Kennedy authorized the green beret for exclusive use by US Special Forces.

9. French designer’s monogram : YSL
Yves Saint-Laurent (YSL) was a French fashion designer, actually born in Algeria. Saint-Laurent started off working as an assistant to Christian Dior at the age of 17. Dior died just four years later, and as a very young man Saint-Laurent was named head of the House of Dior. However, in 1950 Saint-Laurent was conscripted into the French Army and ended up in a military hospital after suffering a mental breakdown from the hazing inflicted on him by his fellow soldiers. His treatment included electroshock therapy and administration of sedatives and psychoactive drugs. He was released from hospital, managed to pull his life back together and started his own fashion house. A remarkable story …

11. Symbols of resistance : OMEGAS
The unit of electrical resistance is the ohm (with the symbol omega) named after German physicist Georg Simon Ohm. Ohm was the guy who established experimentally that the amount of current flowing through a circuit is directly proportional to the voltage applied, (V=IR) a relationship that every schoolkid knows as Ohm’s Law.

13. Quetzalcoatl worshiper : AZTEC
The Aztec god Quetzalcoatl’s name means “feathered serpent”. He was worshiped as the god of wind and of learning.

19. Election mo. : NOV
November is the eleventh month in our calendar. The name comes from the Latin “novem” meaning “nine”, as November was the ninth month in the ancient Roman calendar.

25. “___ Enchanted” (2004 film) : ELLA
“Ella Enchanted” is a fantasy novel written by Gail Carson Levine, and published in 1997. It is a retelling of the story of Cinderella, with lots of mythical creatures added. A film adaptation was released in 2004, starring Anne Hathaway in the title role.

26. “High” times : NOONS
Our word “noon”, meaning “midday”, comes from the Latin “nona hora” that translates as “ninth hour”. Back in Ancient Rome, the “ninth hour” was three in the afternoon. Over the centuries, traditions such as church prayers and “midday” meals shifted from 3 p.m. to 12 p.m., and so “noon” became understood as 12 noon.

I am not a huge fan of western movies, but “High Noon” works for me. The film has a great cast, with Gary Cooper and Grace Kelly in the lead roles. I suppose I like the film because it doesn’t fit the mold as a typical western with lots of predictable action sequences. That said, when “High Noon” first hit theaters it was not popular with audiences, largely because moviegoers were expecting the formulaic western film. One interesting feature of the storyline is that the sequence of events takes place in approximate real time.

27. Govt.-issued security : T-NOTE
A Treasury note (T-Note) is a government debt that matures in 1-10 years. A T-Note has a coupon (interest) payment made every six months. The T-note is purchased at a discount to face value, and at the date of maturity can be redeemed at that face value. A T-Bill is a similar financial vehicle, but it matures in one year or less, and a T-Bond matures in 20-30 years.

36. Easel, e.g. : STAND
The word “easel” comes from an old Dutch word meaning “donkey” would you believe? The idea is that an easel carries its load (an oil painting, say) just as a donkey would be made to carry a load.

45. Soft drink in a green bottle : FRESCA
Fresca is a Coca Cola product introduced in 1966, and is unusual in that it has no Pepsi Cola equivalent. It has always been marketed as a 0-calorie grapefruit drink, and so it’s artificially sweetened.

46. 2000 Summer Olympics city : SYDNEY
Sydney is the most populous city in Australia. People from Sydney are known as “Sydneysiders”.

48. Smallest OPEC nation : QATAR
Qatar is a sovereign state in the Middle East occupying the Qatar Peninsula, itself located in the Arabian Peninsula. Qatar lies on the Persian Gulf and shares one land border, with Saudi Arabia to the south. Qatar has more oil and gas reserves per capita of population than any other country in the world. In 2010, Qatar had the fastest growing economy in the world, driven by the petrochemical industry. Qatar is scheduled to host the 2022 FIFA World Cup, although the nation’s eligibility to do so is under question after a far-reaching bribery scandal was uncovered at the sport’s governing body.

61. Spy novelist Deighton : LEN
I used to walk my dog right past author Len Deighton’s house years ago, as we lived in the same village in Ireland (probably my only claim to fame!). Deighton wrote the excellent espionage thriller “The IPCRESS File”, made into a 1965 movie starring Michael Caine.