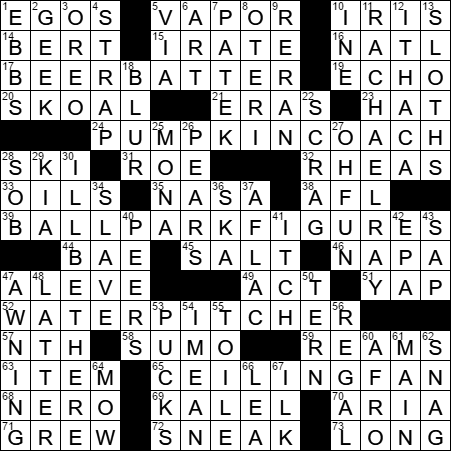 17A. Coating for fish that you might think would make you tipsy : BEER BATTER
24A. Cinderella’s carriage : PUMPKIN COACH
52A. Waiter’s refilling aid : WATER PITCHER
65A. Overhead cooler : CEILING FAN

Today’s Wiki-est, Amazonian Googlies
Across
10. Flower girl? : IRIS
Iris is a genus of flowering plants that come in a wide variety of flower colors. The term “iris” is a Greek word meaning “rainbow”. Many species of irises are called “flags”. One suggestion is that the alternate name comes from the Middle English “flagge” meaning “reed”. This term was used because iris leaves look like reeds.

14. Muppet with a unibrow : BERT
For many years, I believed that the “Sesame Street” characters Bert and Ernie were named after two roles played in the Christmas classic “It’s a Wonderful Life”. In the movie, the policeman’s name is Bert and his taxi-driving buddy is named Ernie. However, the “Sesame Street” folks have stated that the use of the same names is just a coincidence. Aww, I don’t wanna believe that’s a coincidence …

23. Derby or fedora : HAT
I think a bowler hat is usually called a derby here in the US. The bowler was first produced in 1849 in London by hatmakers Thomas and William Bowler, hence the name. The alternative name of “derby” comes from the tradition of wearing bowler hats at the Derby horse race (a major race held annually in England).

24. Cinderella’s carriage : PUMPKIN COACH
The folk tale about “Cinderella” was first published by French author Charles Perrault in 1697, although it was later included by the Brothers Grimm in their famous 1812 collection. The storyline of the tale may date back as far as the days of Ancient Greece. A common alternative title to the story is “The Little Glass Slipper”.

31. ___ v. Wade : ROE
Roe v. Wade was decided in a US District Court in Texas in 1970, and reached the Supreme Court on appeal. The basic decision by the Supreme Court was that a woman’s constitutional right to privacy applied to an abortion, but that this right had to be balanced with a state’s interest in protecting an unborn child and a mother’s health. The Court further defined that the state’s interest became stronger with each trimester of a pregnancy. So, in the first trimester the woman’s right to privacy outweighed any state interest. In the second trimester the state’s interest in maternal health was deemed to be strong enough to allow state regulation of abortion for the sake of the mother. In the third trimester the viability of the fetus dictated that the state’s interest in the unborn child came into play, so states could regulate or prohibit abortions, except in cases where the mother’s life was in danger. I’m no lawyer, but that’s my understanding of the initial Supreme Court decision …

35. Org. that operates the Jupiter orbiter : NASA
Juno is a space probe launched by NASA in 2011 that has been orbiting the planet Jupiter since 2016.

38. ___-C.I.O. : AFL
The American Federation of Labor (AFL) was founded in 1886, making it one of the first federations of unions in the country. Over time the AFL became dominated by craft unions, unions representing skilled workers of particular disciplines. In the early thirties, John L. Lewis led a movement within the AFL to organize workers by industry, believing this would be more effective for the members. But the craft unions refused to budge, so Lewis set up a rival federation of unions in 1932, the Congress of Industrial Organizations (CIO). The two federations became bitter rivals for over two decades until finally merging in 1955 to form the AFL-CIO.

44. Slangy “sweetie” : BAE
“Bae” is a contemporary term of endearment, a pet name that is an abbreviation of “babe, baby”.

46. California wine valley : NAPA
The first commercial winery in Napa Valley, California was established way back in 1858. However, premium wine production only dates back to the 1960s, with the region really hitting the big time after its success at the Paris Wine Tasting of 1976. The story of that famous blind wine tasting is told in the entertaining 2008 film “Bottle Shock”.

58. Sport for heavyweights : SUMO
Sumo is a sport that is practiced professionally only in Japan, the country of its origin. There is an international federation of sumo wrestling now, and one of the organization’s aims is to have the sport accepted as an Olympic event.

59. Curses (out) : REAMS
I must admit that I find the slang term “to ream out”, with its meaning “to scold harshly”, to be quite distasteful. The usage of the word as a reprimand dates back to about 1950.

63. Couple, in a gossip column : ITEM
An unmarried couple known to be involved with each other might appear in the gossip columns. This appearance as “an item” in the papers, led to the use of “item” to refer to such a couple, but only since the very early seventies.

68. Ruler said to have fiddled while Rome burned : NERO
The Great Fire of Rome raged for five and a half days in 64 AD. Of the fourteen districts of Rome, three were completely destroyed and seven more suffered serious damage. The emperor at the time was Nero, although reports that he fiddled, played his lyre or sang while the city burned; those accounts are probably not true. In fact, Nero was staying outside of Rome when the fire started and rushed home on hearing the news. He organized a massive relief effort, throwing open his own home to give shelter to many of the citizens who were left living on the street.

69. Superman’s birth name : KAL-EL
Jor-El was a scientist on the planet Krypton who was married to Lara. Jor-El and Lara had an infant son named Kal-El who they were able to launch into space towards Earth just before Krypton was destroyed. Kal-El became Superman. In the 1978 movie “Superman”, Jor-El was played by Marlon Brando, Lara was played by Susannah York, and Kal-El/Superman was played by Christopher Reeve.

70. Song for a diva : ARIA
The term “diva” comes to us from Latin via Italian. “Diva” is the feminine form of “divus” meaning “divine one”. The word is used in Italy to mean “goddess” or “fine lady”, and especially is applied to the prima donna in an opera. We often use the term to describe a singer with a big ego.

3. Cookie that may be dipped in milk : OREO
There’s a smartphone app featuring the Oreo cookie. It’s a game in which one twists Oreo cookies apart, “licks” the cream from the center and then dunks the remainder of the cookie in a glass of milk.

7. ___ Philippe (Swiss watchmaker) : PATEK
Patek Philippe is a manufacturer of luxury watches in Switzerland. The company was founded in Geneva in 1851, by Polish watchmaker Antoni Patek and French watchmaker Adrien Philippe. Patek Philippe watches routinely sell at auction at prices in excess of a million dollars.

8. Cheri formerly of “S.N.L” : OTERI
Cheri Oteri was the SNL (“Saturday Night Live”) cast member who regularly appeared with Will Ferrell in the skit featuring a pair of Spartan cheerleaders.

11. Host of TV’s “30 Minute Meals” : RACHAEL RAY
Rachael Ray is a celebrity chef and host of several shows on the Food Network television channel. Ray comes from a family that owned and managed a number of restaurants in the northeast of the country. One of Ray’s TV shows is “$40 a Day”, in which she demonstrates how to visit various cities in North America and Europe and eat three meals and a snack on a daily budget of just $40.

12. Cornell University’s home : ITHACA
Ezra Cornell was an associate of Samuel Morse and made his money in the telegraph business. After he retired he co-founded Cornell University in Ithaca, New York. He provided a generous endowment and donated his farm as a site for the school, and was then rewarded by having the institute named after him.

25. Leonardo da Vinci’s “___ Lisa” : MONA
Leonardo da Vinci’s masterpiece that we know in English as the “Mona Lisa” is called “La Gioconda” in Italian, the language of the artist. It’s also known as “La Joconde” by the Government of France which owns the painting and displays it in the Louvre Museum in Paris. The title comes from the name of the subject, almost certainly Lisa Gherardini, wife of Francesco del Giocondo. Giocondo was a wealthy silk merchant in Florence who commissioned the painting for the couple’s new home to celebrate the birth of their second son.

29. Maker of autodom’s Optima : KIA
The Kia Optima was sold for a while in Canada and Europe as the Kia Magentis.

30. Words after “Reach Out” in a #1 Four Tops hit : I’LL BE THERE
The original lineup of the Four Tops agreed to form a vocal quartet when they were high school students together in Detroit. The group started out using the name “The Four Aims”, but changed it to Four Tops to avoid confusion with the Ames Brothers.

36. Cousin of calypso : SKA
Ska originated in Jamaica in the late fifties and was the precursor to reggae music. No one has a really definitive etymology of the term “ska”, but it is likely to be imitative of some sound.

The musical style of calypso originated in Trinidad and Tobago, but there seems to be some debate about which influences were most important as the genre developed. It is generally agreed that the music was imported by African slaves from their homeland, but others emphasize influences of the medieval French troubadours. To me it sounds more African in nature. Calypso reached the masses when it was first recorded in 1912, and it spread around the world in the thirties and forties. It reached its pinnacle with the release of the famous “Banana Boat Song” by Harry Belafonte.

37. Quacky insurance giant : AFLAC
In 1999, Aflac (American Family Life Assurance Company) was huge in the world of insurance but it wasn’t a household name, so a New York advertising agency was given the task of making the Aflac brand more memorable. One of the agency’s art directors, while walking around Central Park one lunchtime, heard a duck quacking and in his mind linked it with “Aflac”, and that duck has been “Aflacking” ever since …

43. Softhead : SAP
“Sap” is slang for a fool, someone easily scammed. The term arose in the early 1800s in Britain when it was used in “saphead” and “sapskull”. All these words derive from “sapwood”, which is the soft wood found in tree trunks between the bark and the heartwood at the center.

48. ___-day Saints (Mormons) : LATTER
The Church of Jesus Christ of Latter-day Saints, often abbreviated to “LDS”, is known colloquially as the Mormon Church.

55. French fabric : TOILE
Toile fabric can be used as upholstery, or as a wallpaper, or even as a fabric for clothing.