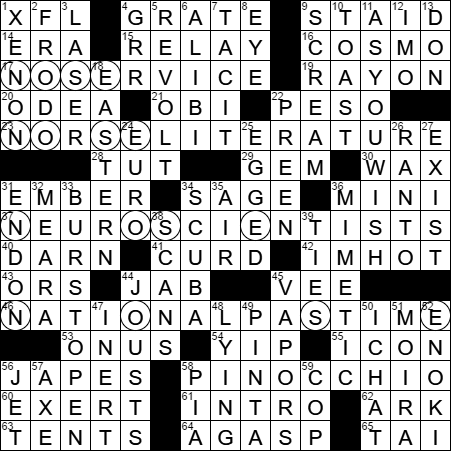 CROSSWORD SETTER: Timothy Polin
THEME: Pinocchio
Each of today’s themed answers includes four circled letters that spell out the word NOSE. And, Pinocchio must been LYING, because that NOSE is growing in length as we progress down the grid:

17A. What zero bars on a cellphone indicates : NO SERVICE
23A. Viking tales, e.g. : NORSE LITERATURE
37A. Experts on the brain : NEUROSCIENTISTS
46A. Baseball, in America : NATIONAL PASTIME

Today’s Wiki-est, Amazonian Googlies
Across
1. Defunct gridiron org. : XFL
The XFL was an American Football league that only survived for one season. The intention of the league was to provide football fans with something to watch in the off-season, but the fans didn’t bother. There was discussion when the league was founded that “XFL” would stand for “Extreme” Football League, but the decision was made to let the “X” stand for nothing at all.

9. Rather conservative : STAID
Something described as “staid” is unwavering, fixed. This usage expanded to mean “sober, sedate”. The term dates back to the 16th century, and comes from verb “to stay”. “Staid” is a rewriting of the past participle “stayed”.

16. Pink cocktail, informally : COSMO
Like so many famous cocktails, the actual origins of the cosmopolitan are disputed. It is a nice drink though. One of the standard recipes is 4 parts citrus vodka, 1.5 parts Cointreau, 1.5 parts lime juice and 3 parts cranberry juice.

19. Synthetic fabric : RAYON
Rayon is a little unusual in the textile industry in that it is not truly a synthetic fiber, but nor can it be called a natural fiber. Rayon is produced from naturally occurring cellulose that is dissolved and then reformed into fibers.

20. Old-fashioned theaters : ODEA
In Ancient Greece an odeon (also “odeum”) was like a small theater, with “odeon” literally meaning a “building for musical competition”. Odea were used in both Greece and Rome for entertainments such as musical shows and poetry readings.

21. “Memoirs of a Geisha” accessory : OBI
“Memoirs of a Geisha” is a novel by American writer Arthur Golden that recounts the life of a geisha working in Kyoto, Japan before, during and after WWII. Golden was helped in his research by a retired geisha called Mineko Iwasaki who claimed that she provided assistance on condition of anonymity. When her name was published in the book, Iwasaki sued and ended up with an undisclosed settlement. There was a 2005 movie adaption of the novel, which also led to some criticism in Japan. The concern was that Chinese actresses were used for the main female roles instead of Japanese actresses.

22. Bit of dinero : PESO
The coin called a “peso” is used in many Spanish-speaking countries around the world. The coin originated in Spain where the word “peso” means “weight”. The original peso was what we know in English as a “piece of eight”, a silver coin of a specific weight that had a nominal value of eight “reales”.

“Dinero” is the Spanish word for money, as well as a slang term for money here in the US.

23. Viking tales, e.g. : NORSE LITERATURE
The Vikings were a Germanic people from northern Europe who were noted as great seafarers. Key to the success of the Vikings was the design of their famous “longships”. Made from wood, the longship was long and narrow with a shallow hull, It was also light, so that the crew would actually carry it small distances over land and around obstacles. Longships were designed to be propelled both by sail and by oars.

30. Opposite of wane : WAX
The phases of the moon have been given the following names, in order:

41. Sour milk product : CURD
When milk curdles it separates into two parts, the solid curds and the liquid whey.

43. Surgery locales, for short : ORS
Surgery (surg.) is usually performed in an operating room (OR).

56. Wisecracks : JAPES
To jape means “to joke or quip”. The exact origins of “jape” are unclear, but it does seem to come from Old French. In the mid-1600’s “to jape” was a slang term meaning “to have sex with”. No joke!

62. Flood refuge : ARK
The term “ark”, when used with reference to Noah, is a translation of the Hebrew word “tebah”. The word “tebah” is also used in the Bible for the basket in which Moses was placed by his mother when she floated him down the Nile. It seems that the word “tebah” doesn’t mean “boat” and nor does it mean “basket”. Rather, a more appropriate translation is “life-preserver” or “life-saver”. So, Noah’s ark was Noah’s life-preserver during the flood.

Down
1. Fifth member in a noble line : XENON
The noble gases (also “rare gases”) are those elements over on the extreme right of the Periodic Table. Because of their “full” complement of electrons, noble gases are very unreactive. The six noble gases that occur naturally are helium, neon, argon, krypton, xenon and radon.

2. Tolkien hero : FRODO
Frodo Baggins is a principal character in J. R. R. Tolkien’s “The Lord of the Rings”. Frodo is a Hobbit, and is charged with the quest of destroying Sauron’s Ring in the fires of Mount Doom.

18. Old airline with the slogan “We have to earn our wings every day” : EASTERN
Eastern Air Lines was around from 1926 until 1991. The company was purchased in 1938 by Eddie Rickenbacker, who was a WWI flying ace. Under Rickenbacker’s leadership, Eastern were very successful. However, the airline couldn’t cope with a strike, high fuel prices and deregulation in the nineties, so Eastern went bankrupt in 1991.

24. Modern prefix with skeptic : EURO-
“Euroscepticism” is a criticism of the European Union, usually based on the belief that integration weakens the nation state.

25. Urged (on) : EGGED
The verb “edge” has been used to mean to incite, to urge on, from the 16th century. Somewhere along the way “edge” was mistakenly replaced with “egg”, giving us our term “to egg on” meaning “to goad”.

44. Renaissance Faire events : JOUSTS
Jousting can involve the use of a number of different weapons, but when lances are used the competition is called “tilting”.

49. Companion of the Niña and Santa Maria : PINTA
Famously, Christopher Columbus used three ships in his first voyage across the Atlantic: the Santa Maria, the Niña and the Pinta. The Pinta was the fastest of the three, and it was from the Pinta that the New World was first spotted, by a sailor named Rodrigo de Triana who was a lookout on the fateful day. Pinta was a nickname for the ship that translated as “the painted one”. The Pinta’s real name has been lost in mists of time.

50. Apple’s former instant-messaging program : ICHAT
iChat was introduced in 2002, and was Apple’s “instant messaging” application that integrated with the Mac Operating System. iChat was replaced by Messages.

51. “On the Beach” heroine : MOIRA
“On the Beach” is a wonderful novel by Nevil Shute that was first published in 1957. The famous story is about the ending of the human race as nuclear fallout spreads south from the northern hemisphere after WWIII. The novel was adapted into a great 1959 movie starring Gregory Peck, Ava Gardner and even Fred Astaire.

56. Boeing product : JET
The Boeing Company was founded in Seattle in 1916 by aviation pioneer William Boeing, with the enterprise’s first name being “Pacific Aero Products Co.” Boeing had worked in the timber industry and set up his aircraft company in the Pacific Northwest to take advantage of the local supply of spruce wood.

58. ___ mater (brain cover) : PIA
“Pia mater” is Latin, and means “tender mother”. It is the name given to the mesh-like envelope that surrounds the brain and spinal cord. The pia mater brings blood to some of the exterior parts of the brain, and provides physical support for larger blood vessels passing over the brain’s surface.