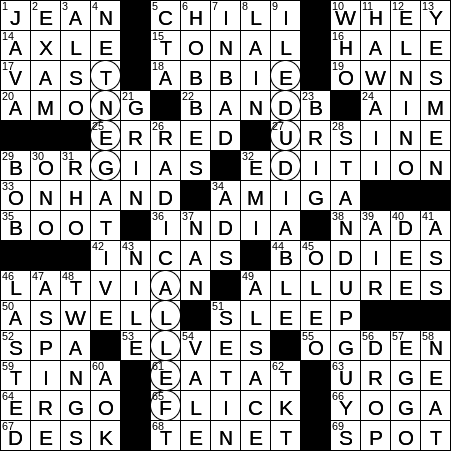 CROSSWORD SETTER: Jacob Stulberg
THEME: Stand-Up Guys
Today’s three themed answers are all in the down-direction. Each contains a hidden word, with circled letters, written in the UP-direction, STANDING UP. Those hidden words are synonyms for GUY:

5. Dish that’s sometimes rated in “alarms” : CHILI
The spiciness or “heat” of a serving of chili is often designated by an unofficial scale ranging from one-alarm upwards.

10. Curds and ___ : WHEY
When milk curdles it separates into two parts, the solid curds and the liquid whey.

16. In fine fettle : HALE
Both the words “hale” and “healthy” derive from the the Old English “hal” meaning healthy.

18. 1960s activist Hoffman : ABBIE
Abbie Hoffman was the founder of the “Yippies”, an activist group that had violent clashes with the police during the 1968 Democratic National Convention in Chicago.

22. Quaint inn, informally : B AND B
An intimate inn (in the US) is a bed & breakfast (B&B). A bed & breakfast back in Ireland is traditionally more basic, and at least used to be much cheaper than a comparable hotel room.

29. Powerful Renaissance family : BORGIAS
The Borgias were a papal family that was very prominent during the Renaissance in Europe. Two of the Borgias became popes, namely Pope Calixtus III and Pope Alexander VI. Pope Alexander VI had several children, including Cesare and Lucrezia Borgia. Cesare became a cardinal, and was the first cardinal to resign from the post. Lucrezia earned a reputation as a femme fatale, and as such turns up in many artworks, novels and movies.

35. Italy’s shape : BOOT
In the Italian Peninsula in Southern Europe, the “boot” is the mainland of Italy, and the the ball being kicked by the boot is the island of Sicily.

36. Setting for much of the movie “Lion” : INDIA
“Lion” is a 2016 film based on the autobiographical book “A Long Way Home” by Saroo Brierley. Brierley is an Indian-born Australian who was accidentally separated from his mother when he was 5 years old, ending up stranded on a train that took the young boy nearly 1,500 km from his home. The excellent film adaption stars Dev Patel as the older Brierley, who searches for his birth-family. Excellent movie …

38. Zippo : NADA
“Nada” is the Spanish word for “nothing”. “De nada” translates literally from the Spanish as “of nothing”, and is used to mean “you’re welcome” or “don’t mention it”. The French have the same expression “de rien”, also translating to “of nothing” and used the same way.

42. People encountered by Pizarro : INCAS
Francisco Pizarro was a Spanish conquistador, the man who led the conquest of the Incan Empire in 1533. Pizarro founded the city of Lima in Peru in 1535. Pizarro’s body was laid to rest in Lima after the son of a rival conquistador assassinated him.

46. Riga native : LATVIAN
Latvia is one of the former Soviet Socialist Republics (SSRs). People from Latvia are called Letts.

53. Munchkins : ELVES
“Munchkin” is a word that we use quite commonly these days, usually to describe a young child. The first Munchkins were characters created by L. Frank Baum in his book “The Wonderful Wizard of Oz”, published in 1900.

55. Nash who wrote “Parsley / Is gharsley” : OGDEN
Ogden Nash the poet was well known for his light and humorous verse, such as:

59. Turner or Fey : TINA
Tina Turner is the stage name used by Anna Mae Bullock, the “Queen of Rock ‘n’ Roll”. Turner has always loved Europe and moved there in the eighties. She now splits her time between her homes in England, France and Switzerland.

65. Movie, informally : FLICK
The slang term “flick” meaning “movie” came into use in the mid-1920s. It comes from the “flickering” appearance of films back then.

66. Class with mats : YOGA
In the West we tend to think of yoga as a physical discipline, a means of exercise that uses specific poses to stretch and strengthen muscles. While it is true that the ancient Indian practice of yoga does involve such physical discipline, the corporeal aspect of the practice plays a relatively small part in the whole philosophy. Other major components are meditation, ethical behavior, breathing and contemplation.

68. Words to live by : TENET
A tenet is an article of faith, something that is held to be true. “Tenet” is Latin for “he holds”.

Down
1. Morning joe : JAVA
Back in 1850, the name “java” was given to a type of coffee grown on the island of Java, and the usage of the term spread from there.

5. Windy City ‘L’ overseer : CTA
The Chicago “L” is the second largest rapid transit system in the US, with the New York City Subway being the largest. The “L” is also the second oldest, again with the New York City Subway system having the honor of being around the longest. Note that the official nickname for the system is the “L” (originally short for “elevated railroad”), although the term “El” is also in common use (especially in crosswords as “ELS”). The L is managed by the Chicago Transit Authority (CTA).

6. Imaginary tiger friend in the comics : HOBBES
The comic strip “Calvin and Hobbes” is still widely syndicated, but hasn’t been written since 1995. The cartoonist Bill Watterson named the character Calvin after John Calvin, the 16th century theologian. Hobbes was named for Thomas Hobbes a 17th century English political philosopher.

9. Infamous prison featured in the 1969 best seller “Papillon” : ILE DU DIABLE
“Papillon” is an excellent film starring Steve McQueen and Dustin Hoffman as convicts in the French penal colony on Devil’s Island (“Île du Diable” in French). “Papillon” is the French word for “butterfly” and is a reference to the character Henri “Papillon” Charrière, played by McQueen.

11. Southernmost U.S. state : HAWAII
The most southerly state in the US is Hawaii, and the most northerly is Alaska. Alaska is also the most westerly state, and believe it or not, it is also the most easterly state. That’s because Alaska’s Aleutian Islands stretch across the 180-degree of longitude into the Eastern Hemisphere.

12. Weather concern in 11-Down : EL NINO
(11A. Southernmost U.S. state : HAWAII)
When the surface temperature of much of the Pacific Ocean rises more that half a degree centigrade, then there is said to be an El Niño episode. That small temperature change in the Pacific has been associated with climatic changes that can stretch right across the globe. El Niño is Spanish for “the boy” and is a reference to the Christ child. The phenomenon was given this particular Spanish name because the warming is usually noticed near South America and around Christmas-time.

13. Lackeys : YES-MEN
A lackey is someone quite servile, or a male servant. The term probably comes from the Middle French “laquais”, a word used for a footman or servant.

23. Two-masted vessel : BRIG
A brig, short for brigantine, is a type of ship. It was the use of brigantines as prison ships that led to use of “brig” as the word for a jail or prison cell on a seagoing vessel.

30. “Be My Yoko ___” (first single by Barenaked Ladies) : ONO
Barenaked Ladies is a Canadian alternative rock band. The somewhat quirky name chosen by the band tends to reflect the group’s concert style. The band is noted for kidding around on stage with lots of banter between songs. They’re also noted for composing and performing the catchy theme song for the hit sitcom “The Big Bang Theory”.

31. Pi’s follower : RHO
Rho is the Greek letter that looks just like our Roman letter “p”, although it is equivalent to the Roman letter R.

32. Former Big Four record co. : EMI
The Big Four recording labels were (until EMI was broken up in 2012 and absorbed by what became “the Big Three”):

41. Nincompoop : ASS
The word “nincompoop”, meaning a fool, seems to have been around for quite a while. It has been used since the 1670s, but no one appears to know its origins.

43. River that feeds Lake Nasser : NILE
Lake Nasser is a large artificial lake created as a result of the construction of the Aswan High Dam (initiated by President Nasser). Lake Nasser lies in southern Egypt and northern Sudan. Strictly speaking, the section of the lake in Sudan is called Lake Nubia.

45. Topping in kosher restaurants : OLEO
According to Jewish dietary law, “kosher” food is fit to eat, and food that is not fit to eat is referred to as “treif” (or “tref”).

49. Region on the Rhine : ALSACE
Of the 27 regions of metropolitan France (i.e. the territory of France within Europe), the smallest is Alsace. Alsace sits at the very east of the country, right on the border with Germany.

57. Breakfast food with a rhyming slogan : EGGO
Eggo is the brand name of a line of frozen waffles made by Kellogg’s. When they were introduced in the 1930s, the name “Eggo” was chosen to promote the “egginess” of the batter. “Eggo” replaced the original name chosen, which was “Froffles”, created by melding “frozen” and “waffles”.

60. Totally fine : A-OK
Our term “A-OK” is supposedly an abbreviation for “A(ll systems are) OK”, and arose in the sixties during the Space Program.