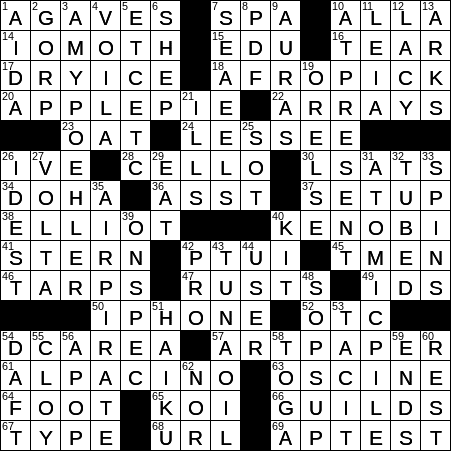 CROSSWORD SETTER: Timothy Polin
THEME: AP Test
Today’s puzzle is an AP TEST in which we have to find themed answers comprising two words beginning with the letters A and P:

69A. Exam for an ambitious H.S. student … or what this puzzle has been? : AP TEST

Today’s Wiki-est, Amazonian Googlies
Across
1. Plants used to make tequila : AGAVES
Tequila is a spirit made from the blue agave. The drink takes its name from the city of Tequila, located about 40 miles northwest of Guadalajara.

10. Penne ___ vodka : ALLA
Penne alla vodka is a pasta dish with a sauce made of vodka, cream, tomatoes, onions and sausage or bacon.

14. Flying insect with prominent eyespots : IO MOTH
The Io moth (automeris io) is a colorful moth that is native to North America. It has a large spot on either wing that resembles an eye

15. University address ender : EDU
The .edu domain was one of the six original generic top-level domains specified. The complete original list is:

17. Frozen CO2, familiarly : DRY ICE
Dry ice is the solid form of carbon dioxide (CO2). The material’s main use is to preserve food and for cooling in general. It is also used in fog machines in theaters and haunted houses.

23. Granola morsel : OAT
The name “Granola” (and “Granula”) were trademarked back in the late 1800s for whole-grain foods that were crumbled and baked until crisp. Granola was created in Dansville, New York in 1894.

28. Smaller cousin of the double bass : CELLO
The word “cello” (plural “celli” or “cellos”) is an abbreviation for “violoncello”, an Italian word for “little violone”, referring to a group of stringed instruments that were popular up to the end of the 17th century. The name violoncello persisted for the instrument that we know today, although the abbreviation ‘cello was often used. Nowadays we just drop the apostrophe.

34. Qatari capital : DOHA
Doha is the capital city of the state of Qatar located on the Persian Gulf. The name “Doha” translates from Arabic as “the big tree”.

38. Cass of the Mamas & the Papas : ELLIOT
Cass Elliot was one of the four singers in the Mamas and the Papas, a sensational group from the sixties. “Mama Cass” was performing sold-out concerts in London in 1974 when she was found dead one morning, having had a heart attack. She was only 32 years old. Eerily, Elliot died in the same flat (on loan from Harry Nilsson) in which the Who’s drummer Keith Moon would die just four years later.

40. Obi-Wan ___ (Jedi knight) : KENOBI
Obi-Wan Kenobi is one of the more beloved of the “Star Wars” characters. Kenobi was portrayed by two fabulous actors in the series of films. As a young man he is played by Scottish actor Ewan McGregor, and as an older man he is played by Alec Guinness.

45. Federal tax agts. : T-MEN
A T-man is a law-enforcement agent of the US Treasury (T is for Treasury).

46. Rain delay covers : TARPS
Originally, tarpaulins were made from canvas covered in tar that rendered the material waterproof. The word “tarpaulin” comes from “tar” and “palling”, with “pall” meaning “heavy cloth covering”.

47. Undergoes oxidation : RUSTS
Rust is iron oxide, and oxidation is the reaction that combines an element with oxygen.

50. BlackBerry alternative : IPHONE
Apple started development of the iPhone in 2004 in collaboration with Cingular Wireless (now AT&T Mobility). The confidential program was given the name “Project Purple”, and took thirty months to complete at a cost of about $150 million. The iPhone was introduced in 2007 at the Macworld convention in San Francisco.

61. Michael Corleone player in “The Godfather” : AL PACINO
Al Pacino seems to be best known for playing characters on both sides of the law. Pacino’s big break in movies came when he played Michael Corleone in “The Godfather”, a role that grew for him as the series of films progressed. But his Oscar-winning role was that of a blind ex-military officer in “Scent of a Woman”.

In the Mario Puzo novel “The Godfather”, the story’s central character is Michael Corleone. Michael’s girlfriend, and eventually his wife, is Kay Adams. In the 1972 film adaptation, Michael Corleone was played by Al Pacino, and Kay Adams-Corleone by Diane Keaton.

63. Relating to songbirds : OSCINE
The adjective “oscine” describes birds belonging to the suborder Oscine, a group that includes most songbirds.

In essence, the World Wide Web is a vast collection of documents that is accessible using the Internet, with each document containing hyperlinks which point to other documents in the collection. So the “Web” is different from the Internet, although the terms are often used interchangeably. The Web is the collection of documents, and the Internet is global network of computers on which the documents reside. The Web was effectively the invention of British computer scientist Tim Berners-Lee. The key to Berner-Lee’s invention was bringing together two technologies that already existed: hypertext and the Internet. I for one am very grateful …

69. Exam for an ambitious H.S. student … or what this puzzle has been? : AP TEST
The Advanced Placement (AP) program offers college-level courses to kids who are still in high school. After being tested at the end of the courses, successful students receive credits that count towards a college degree.

Down
1. Opera set in Egypt : AIDA
“Aida” is the famous opera by Giuseppe Verdi, actually based on a scenario written by French Egyptologist Auguste Mariette. Mariette also designed the costumes and stages for the opening performance. The opera was first staged in 1871 in an opera house in Cairo. In the storyline, Aida is an Ethiopian princess brought into Egypt as a slave. Radames is an Egyptian commander who falls in love with her, and then of course complications arise!

2. Trail mix : GORP
“Gorp” is the name sometimes used for trail mix, particularly by hikers. It’s not really known for sure how this name came about, but some say it stands for “good old raisins and peanuts” or perhaps “gobs of raw protein”.

3. “Parks and Recreation” star : AMY POEHLER
Amy Poehler was a cast member on “Saturday Night Live” from 2001 to 2008, notable for appearing in many great sketches, including those where she played Hillary Clinton opposite Tina Fey’s Sarah Palin. Poehler also starred with Fey in the 2008 movie “Baby Mama”. And, Poehler led the cast of the sitcom “Parks and Recreation” for its seven-season run.

“Parks and Recreation” is a sitcom that started airing on NBC in 2009, and it is a show that has grown on me. It stars the “Saturday Night Live” alum Amy Poehler. The creators of “Parks and Recreation” are part of the team responsible for the American version of “The Office”, so you’ll notice some similarities in the style of the two shows, and some actors that have appeared in both.

8. Sharable PC file : PDF
Portable Document Format (PDF) is a file format introduced by Adobe Systems in 1993. PDF documents can be shared between users and read using many different applications, making them more universally accessible than documents saved by one particular program.

9. Invisible emanations : AURAS
An aura (plural “aurae”) is an intangible quality that surrounds a person or thing, a “je ne sais quoi”. “Je ne sais quoi” is French for “I don’t know what”.

11. ___ Organa (“Star Wars” princess) : LEIA
The full name of the character played by Carrie Fisher in the “Star Wars” series of films is Princess Leia Organa of Alderaan, and later Leia Organa Solo. Leia is the twin sister of Luke Skywalker, and the daughter of Anakin Skywalker (aka Darth Vader) and Padmé Amidala. Leia is raised by her adoptive parents Bail and Breha Organa. She eventually marries Han Solo.

13. Chests in synagogues : ARKS
The Torah ark is found in a synagogue, and is the ornamental container in which are stored the Torah scrolls. The word “Torah” best translates as “teaching”, I am told.

25. Barfly : SOT
Our word “sot” comes from the Old English “sott”, meaning “fool”. The word “sot” started to be associated with alcohol and not just foolery in the late 1500s.

26. Explanatory Latin phrase : ID EST
“Id est” is Latin for “that is”, and is often abbreviated to “i.e.” when used in English.

27. Physicist Alessandro, inventor of the electric battery : VOLTA
Alessandro Volta was the physicist who invented the first battery, way back in 1800. One of Volta’s first applications of his new invention was to use a battery (and a very long run of wire between the Italian cities of Como and Milan) to shoot off a pistol from 30 miles away!

32. Went leisurely downriver, perhaps : TUBED
In the activity of river tubing, participants free-float down a river in inflated inner tubes.

33. Recasts damaging information in a favorable light, say : SPINS
“Spin doctor” is a slang term for a professional in the field of public relations.

35. Plane hijacker : AIR PIRATE
The verb “to hijack” dates back to the 1920s when it applied to the robbing of a bootlegger or smuggler while he or she was traveling. The term probably comes from “highway” and “jack”, with the latter meaning “to hold up, rob”.

39. How freelance work is typically done : ON SPEC
The term “free lance” was coined by Sir Walter Scott in his 1820 novel “Ivanhoe”, using it to describe a medieval mercenary warrior. Forty years later, a freelancer was a journalist who did work for more than one publication without a long-term commitment.

43. Source of healthful fatty acids in a StarKist can : TUNA OIL
StarKist is a brand of tuna that uses Charlie the Tuna as its cartoon mascot.

51. 5-7-5 verse : HAIKU
A haiku is a very elegant form of Japanese verse. When writing a haiku in English we tend to impose the rule that the verse must contain 17 syllables. This restriction comes from the rule in Japanese that the verse must contain 17 sound units called “moras”, but moras and syllables aren’t the same thing. What the difference is though, is not so clear to me. Here’s an example of a Haiku:

54. Batty : DAFT
The expression “bats in the belfry” meaning “mad, crazy” conjures up images of bats flying around Gothic bell towers, but actually it’s a relatively recent addition to our vernacular. The term is American in origin, and dates back only to the early 1900s. The concept is that someone who is “crazy”, with wild ideas flying around his or her head, can be described as having bats (wild ideas) flying around the belfry (head). The terms “bats” and “batty” originated at the same time, and are clearly derivative.

58. Garment draped over the shoulders : TOGA
In Ancient Rome the classical attire known as a toga (plural “togae”) was usually worn over a tunic. The tunic was made from linen, and the toga itself was a piece of cloth about twenty feet long made from wool. The toga could only be worn by men, and only if those men were Roman citizens. The female equivalent of the toga was called a “stola”.