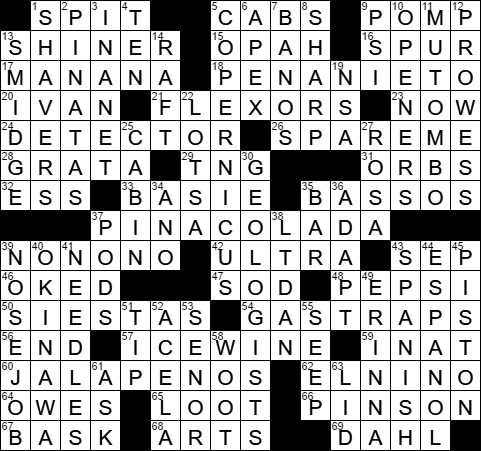 CROSSWORD SETTER: Alex Eaton-Salners
THEME: Ñ Ñ Ñ Ñ Ñ
We have five intersecting pairs of words of Spanish origin. Each of those pairs intersects with a letter Ñ, and N with a tilde:

Today’s Wiki-est, Amazonian Googlies
Across
15. Colorful, warm-blooded fish : OPAH
Opah is the more correct name for the fish also known as the sunfish, moonfish or Jerusalem haddock. I’ve seen one in the Monterrey Aquarium. It is one huge fish …

18. Mexican president Enrique : PEÑA NIETO
Enrique Peña Nieto is the current President of Mexico, holding office since 2012. President Nieto has struggled with a plummeting approval rating ever since, largely due to a sluggish economy and a weakened Mexican Peso. And then there’s President Trump and “the wall” …

20. Pavlov with a Nobel : IVAN
Ivan Pavlov was studying gastric function in dogs in the 1890s when he observed that his subject dogs started to salivate before he even presented food to them. This “psychic secretion”, as he called it, interested him so much that he changed the direction of his research and studied the reactions of dogs to various stimuli that were associated with the presentation of food. Famously, he discovered that a dog could be conditioned to respond as though he was about to be fed, just by sensing some stimulus that he had come to associate with food. This might be a bell ringing, an electric shock (poor dog!) or perhaps the waving of a hand. Nowadays we might describe someone as “Pavlov’s Dog” if that person responds just the way he/she has been conditioned to respond, rather than applying critical thinking.

21. Biceps and hamstrings : FLEXORS
The biceps muscle is made up of two bundles of muscle, both of which terminate at the same point near the elbow. The heads of the bundles terminate at different points on the scapula or shoulder blade. “Biceps” is Latin for “two-headed”.

The hamstrings are four tendons connected to three posterior thigh muscles, although the term is sometimes used for the thigh muscles themselves.

29. 1987-94 “Star Trek” series, briefly : TNG
When Gene Roddenberry first proposed the science fiction series that became “Star Trek”, he marketed it as “Wagon Train to the Stars”, a pioneer-style Western in outer space. In fact his idea was to produce something more like “Gulliver’s Travels”, as he intended to write episodes that were adventure stories on one level, but morality tales on another. Personally I think that he best achieved this model with the spin-off series “Star Trek: The Next Generation” (TNG). If you watch individual episodes you will see thinly disguised treatments of moral issues such as racism, homosexuality, genocide etc. For my money, “The Next Generation” is the best of the whole franchise …

33. Count in music : BASIE
“Count” Basie’s real given name was “William”. Count Basie perhaps picked up his love for the piano from his mother, who played and gave him his first lessons. Basie’s first paying job as a musician was in a movie theater, where he learned to improvise a suitable accompaniment for the silent movies that were being shown. Basie was given the nickname “Count” as he became lauded as one of the so-called “Jazz royalty”. Others so honored are Nat “King” Cole and Duke Ellington.

37. Drink often served with a miniature umbrella : PIÑA COLADA
“Piña colada” is a Spanish term which translates into “strained pineapple”. The Piña colada cocktail was introduced in the Caribe Hilton San Juan in 1954, and since 1978 it has been the official beverage of Puerto Rico. Yum …

42. Prefix with violet or violent : ULTRA-
At either end of the visible light spectrum are the invisible forms of radiation known as infrared (IR) light and ultraviolet (UV) light. IR light lies just beyond the red end of the visible spectrum, and UV light lie just below the violet end.

50. Naps south of the border : SIESTAS
We use the word “siesta” to describe a short nap in the early afternoon, taking the word from the Spanish. In turn, the Spanish word is derived from the Latin “hora sexta” meaning “the sixth hour”. The idea is that the nap is taken at “the sixth hour” after dawn.

57. Drink made from frozen grapes : ICE WINE
Ice wine is a sweet, dessert wine that is produced using grapes that have frozen on the vine. The grapes must be harvested very quickly and pressed in a cold environment while still frozen. Because it is only the water in the grapes that freezes, the juice from the pressing is more highly concentrated, containing more sugar and other dissolved solids. Most of the world supply of ice wine comes from Canada and Germany.

60. Peppers milder than habaneros : JALAPEÑOS
The jalapeño is a chili pepper, and a favorite of mine. The pepper’s name translates from Spanish as “from Xalapa”. Xalapa (also “Jalapa”) is the capital of the Mexican state of Veracruz, and the traditional origin of the jalapeño pepper.

The habanero chili has a very intense flavor. Interestingly, the correct spelling of the chili’s name is “habanero”, although in English we try to be clever and add a tilde making it “habañero”, which isn’t right at all …

62. Warm Pacific current : EL NIÑO
When the surface temperature of much of the Pacific Ocean rises more that half a degree centigrade, then there is said to be an El Niño episode. That small temperature change in the Pacific has been associated with climatic changes that can stretch right across the globe. El Niño is Spanish for “the boy” and is a reference to the Christ child. The phenomenon was given this particular Spanish name because the warming is usually noticed near South America and around Christmas-time.

Down
2. They’re broken at parties : PIÑATAS
Piñatas originated in Mexico, probably among the Aztecs or Mayans. Today piñatas are usually made from cardboard that is brightly decorated with papier-mâché. Traditionally a piñata was made out of a clay pot, adorned with feathers and ribbons and filled with small treasures. During religious ceremonies the clay pots would be suspended and broken open so that the contents would spill out onto the ground at the feet of a god as an offering.

4. Highest point value for a Scrabble tile : TEN
The game of Scrabble has been produced in many international versions, and each of these editions has its own tile distribution to suit the local language. For example, in English we have two tiles worth ten points: one “Q” and one “Z”. If you play the game in French then there are five tiles worth ten points: one “K”, one “W”, one “X”, one “Y” and one “Z”.

5. He placed the sun at the center of the universe : COPERNICUS
Nicolaus Copernicus was an astronomer active during the Renaissance. Copernicus was the first person to propose that the Earth and the planets revolved around the Sun.

11. Basketball Hall-of-Famer Dikembe ___ : MUTOMBO
Dikembe Mutombo is an American former NBA player who moved to the US from the Republic of the Congo at the age of the 21. Before joining the NBA, Mutombo started his basketball career playing with the Georgetown Hoyas.

13. Tiny bit : SMIDGE
Our word “smidgen” (sometimes shortened to “smidge”) is used to describe a small amount. The term might come from the Scots word “smitch” that means the same thing or “a small insignificant person”.

19. “Crypto City” at Ft. Meade : NSA
Fort George G. Meade is located near Odenton, Maryland and is most famous these days as the location of the headquarters of the National Security Agency (NSA).

27. Parks of the civil rights movement : ROSA
Rosa Parks was one of a few brave women in days gone by who refused to give up their seats on a bus to white women. It was the stand taken by Rosa Parks on December 1, 1955 that sparked the Montgomery, Alabama Bus Boycott. President Clinton presented Ms. Parks with the Presidential Medal of Freedom in 1996. When she died in 2005, Rosa Parks became the first ever woman to have her body lie in honor in the US Capitol Rotunda.

35. “Cheers” setting : BAR
The wonderful sitcom “Cheers” ran for eleven seasons on NBC, from 1982 to 1993. “Cheers” spawned an equally successful spin-off show called “Frasier”, which also ran for eleven seasons and often featured guest appearances of characters from the original “Cheers”. The Cheers bar was styled on the Bull & Finch Pub in Boston (in which I’ve had a pint of Guinness two!). The owner of the Bill & Finch cleverly agreed to the initial interior and exterior shots, charging only one dollar. Since then he has made millions from selling “Cheers” memorabilia, and also from increased trade.

37. Okra units : PODS
The plant known as okra is mainly grown for it edible green pods. The pods are said to resemble “ladies’ fingers”, which is an alternative name for the plant. Okra is known as “ngombo” in Bantu, a name that might give us the word “gumbo”, the name for the name of the southern Louisiana stew that includes okra as a key ingredient.

38. Forrest Gump’s C.O. : LT DAN
Actor Gary Sinise was nominated for a Best Supporting Actor Oscar for playing Lieutenant Dan Taylor in the 1994 film “Forrest Gump”. Senise then played the lead in television’s “CSI: NY” starting in 2004. Senise was awarded the Presidential Citizens Medal by President Bush for his work helping Iraqi school children as well as his work with the USO.

40. Pacific battle site of 1945 : OKINAWA
The bloodiest battle in the whole of WWII was the amphibious assault of the Okinawa Islands in 1945. About 100,000 Japanese soldiers died, with American casualties recorded at 50,000. Additionally, 100,000 civilians were killed in action, wounded or committed suicide. The large island of Okinawa was just 340 miles from Japan, and a major objective for the allies as it could be used for launching air assaults on the mainland. However, just a few weeks after Okinawa was taken, the war ended following the atomic bombings of Hiroshima and Nagasaki.

45. One of the eight in a V-8 : PISTON
The engine known as a V8 is configured with two rows of four cylinders mounted on a crankcase. The rows of cylinders are offset from each other around the crankshaft at right angles, or perhaps a little less. This arrangement of eight cylinders in a V-shape gives rise to the name “V8”.

52. Northeast Corridor express train : ACELA
The Acela Express is the fastest train routinely running in the US, getting up to 150 mph at times. The service runs between Boston and Washington D.C. via Baltimore, Philadelphia and New York. Introduced in 2000, the brand name “Acela” was created to evoke “acceleration” and “excellence”.

58. “Wow!,” in Internet-speak : WOOT!
Apparently “woot” is computer slang, an expression of excitement of joy. It has been suggested that the term comes from the game “Dungeons and Dragons”, and is a contraction of “wow, loot”. Unknown to me outside of crosswords …

63. Tupperware topper : LID
Back in the 1930s, Earl Tupper was working at the DuPont Chemical Company, and from DuPont obtained inflexible pieces of polyethylene slag. Tupper purified the slag and shaped it into unbreakable containers. He added airtight lids with a “burping seal”, which were provided tight seals similar to that provided by the lids on paint cans. He called his new product Tupperware.