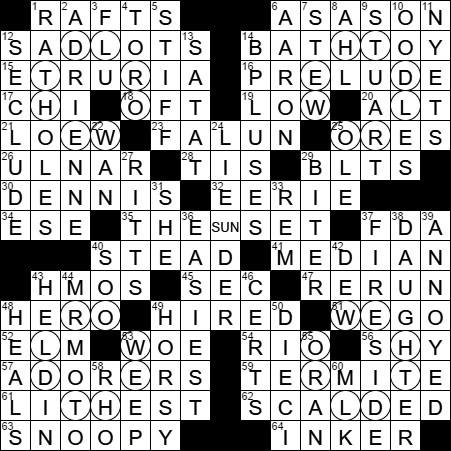 CROSSWORD CONSTRUCTOR: Derek Bowman & Sarah Keller
THEME: The World Circling the Sun
Today’s grid includes circled letters that represent THE WORLD rotating as it circles around the SUN (a rebus square in the middle).

35A. Cowboys may ride off into it : THE SUNSET
24D. Opposite of covers : LIES UNDER

Today’s Wiki-est, Amazonian Googlies
Across
1. A whole bunch : RAFTS
A “raft” is a large amount, coming from the Middle English “raf” meaning the same thing.

15. Ancient region of central Italy : ETRURIA
Etruria was a region in Central Italy, home to the Etruscans. Etruscan society was at its height about 650 BC.

17. Universal life force : CHI
In Chinese culture “qi” or “chi” is the life force in any living thing.

20. Lead-in to right or rock : ALT-
“Alt-right” is a term much associated with presidential campaign of Donald Trump. The name is descriptive of a right-wing ideology that is an alternative to mainstream conservatism in the US.

I really don’t know what alt-rock is, and I can’t seem to work it out. Just an old fuddy-duddy …

21. Movie theater pioneer Marcus : LOEW
Marcus Loew was a New Yorker born into a poor Jewish family. He started out in a penny arcade business and used its profits to buy into a nickelodeon. He built a whole chain of movie theaters, and then moved into the production of films so that he could guarantee supply of features that he could show in his theaters. Eventually he pulled together the Metro-Goldwyn-Mayer (MGM) film production company, and sadly passed away just three years after he inked the deal.

29. Diner purchases, for short : BLTS
The BLT (bacon, lettuce and tomato) is the second most popular sandwich in the US, after the plain old ham sandwich.

30. Towheaded comics boy : DENNIS
“Dennis the Menace” is a comic strip that first appeared in 1951, and was originally drawn by Hank Ketcham. The strip made the jump over the years from the newspaper to television and the silver screen. Dennis’s full name is Dennis Mitchell, and his parents are Henry and Alice (Johnson) Mitchell. Dennis’s nemesis is his neighbor, Mister George Everett Wilson. Hank Ketcham drew his inspiration for the story from his real life. When he introduced the strip he had a 4-year-old son called Dennis, and a wife named Alice.

37. Letters of approval : FDA
The Food and Drug Administration (FDA) approves drugs for specific conditions. It is quite legal for a healthcare professional to prescribe an approved medication for a use that is different to the FDA-approved indication. This usage of the drug is described as “off-label”.

48. Sub : HERO
“Hero” is another name for a submarine sandwich. The hero originated in New York City in the 1800s among Italian immigrants who wanted an Italian sandwich that reminded them of home. The name “hero” was coined in the 1930s, supposedly by a food critic in the “New York Herald Tribune” when he wrote that “one had to be a hero” to finish the gigantic sandwich. Hero is a prevalent term to this day in New York City, reserved for a submarine sandwich with an Italian flavor.

52. The Liberty Tree, for one : ELM
The original Liberty Tree was an elm tree that stood near Boston Common and marked the place where folks would rally in the build-up to the American Revolution. The symbolism of the Liberty Tree migrated across the Atlantic during the French Revolution. Revolutionaries planted “Les arbres de la liberté” as symbols of revolutionary hope.

57. The Magi, e.g. : ADORERS
“Magi” is the plural of the Latin word “magus”, a term applied to someone who was able to read the stars. Hence, magi is commonly used with reference to the “wise men from the East” who followed the star and visited Jesus soon after he was born.

61. Most svelte : LITHEST
“Svelte” comes into English from Latin, via the Italian “svelto” meaning “stretched out”. Something or someone described as svelte would be slender and graceful.

63. Comics character with a big nose : SNOOPY
Snoopy is a central and much-loved character in the Charles M. Schulz comic strip “Peanuts”. He is Charlie Brown’s pet beagle, and first appeared in “Peanuts” just two days after the strip’s debut in 1950. He was identified as “Snoopy” a month later, and first “spoke” (in a thought balloon) in 1952. Initially depicted as a more traditionally dog-like figure, Schulz started to anthropomorphize Snoopy in 1952, first drawing him upright on his hind legs in 1952, while ice-skating on a frozen lake.

Down
3. Something bad to come down with : FLU
Influenza (flu) is an ailment that is caused by a virus. The virus is readily inactivated by the use of soap, so washing hands and surfaces is especially helpful in containing flu outbreaks.

4. Snow blower brand : TORO
Toro is a manufacturer of mainly lawn mowers and snow removal equipment based in Bloomington, Minnesota. The company was founded in 1914 to build tractor engines.

6. Composer Copland : AARON
Aaron Copland was the most American of all classical composers, I think. Perhaps his most famous work is the “Fanfare for the Common Man”, written in 1942 and a piece intended to be uplifting in the gloomy years leading up to WWII. This piece is recognized not just for performances of the original, but also for the progressive rock version that was recorded by Emerson, Lake & Palmer in 1977.

7. Hearty entree : STEW
“Entrée” means “entry” in French. An entrée can be something that helps one get “a way in”, an interview for example perhaps helped along by a recommendation letter. In Europe, even in English-speaking countries, the entrée is the name for the “entry” to the meal, the first course. I found it very confusing to order meals when I first came to America!

8. Org. with the Calder Cup : AHL
The American Hockey League (AHL) is the so-called development circuit for the National Hockey League (NHL), the equivalent of the minors in professional baseball. The AHL’s playoff trophy is called the Calder Cup, which is named for Frank Calder who was the first president of the NHL.

9. Little of children’s literature : STUART
Elwyn Brooks (E. B.) White was an American writer. His most famous creations were the children’s stories “Charlotte’s Web” and “Stuart Little”, but he also co-authored the writing guide “The Elements of Style” (usually referred to as “Strunk & White”).

29. Midge, for one : BITER
“Midge” is a familiar term used for many different kinds of small flies.

31. “Ain’t ___ Sweet” : SHE
“Ain’t She Sweet” is a popular song first published in 1927, composed by Milton Ager and Jack Yellen. Ager wrote the song for his daughter, Shana. Shana grew up to become Shana Alexander, a political commentator on CBS’s “60 Minutes”.

33. Kind of sleep : REM
“REM” is an acronym that is short for Rapid Eye Movement sleep. REM sleep takes up 20-25% of the sleeping hours and is the period associated with one’s most vivid dreams.

40. Jack of “Barney Miller” : SOO
Jack Soo was a Japanese American actor noted for playing Detective Nick Yemana on the sitcom “Barney Miller” in the seventies and eighties.

“Barney Miller” is a sitcom set in a Greenwich Village, New York police station. All of the action takes place actually within the station house, except for a once-a-year “special” that followed one of the detectives on a stakeout or in their home. The title character is the captain of the precinct, and is played by Hal Linden.

44. Detective whose first name is Kentaro : MR MOTO
The mysterious Mr. Moto is a Japanese secret agent who appears in six novels by American author, John P. Marquand. Mr. Moto was famously played by Peter Lorre in a series of eight films released in the 1930s.

46. Roll at a counter : CERTS
Certs were the first breath mints to be marketed nationally in the US, hitting the shelves in 1956. A Cert is called a mint, but it isn’t really as it contains no mint oil and instead has its famous ingredient named “Retsyn”. Retsyn is a mixture of copper gluconate (giving the green flecks), partially hydrogenated cottonseed oil (not healthy!) and flavoring (maybe mint?).

55. Part of the escape route in “Casablanca” : ORAN
Oran lies on the Algerian coast, and is famous for being the port where the French Navy was largely destroyed by the British during WWII in order to avoid the French vessels falling into the hands of Nazi Germany after France surrendered. This decisive and unexpected unilateral action by the British sent a very strong message around the world that Britain was willing to fight alone against the axis powers if necessary.

58. Density symbol : RHO
Rho is the Greek letter that looks just like our Roman letter “p”, although it is equivalent to the Roman letter R.

60. Jan. honoree : MLK
Martin Luther King, Jr. Day is a US Federal holiday taking place on the third Monday of each year. It celebrates the birthday of Dr. King, and was signed into law by President Reagan in 1983, and first observed in 1986. However, some states resisted naming the holiday MLK Day, and gave it alternative names (like “Civil Rights Day”). It was officially celebrated as MLK Day in all 50 states from the year 2000 onwards.