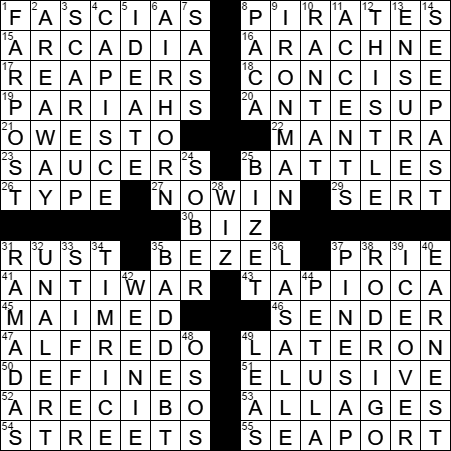 Today’s Wiki-est, Amazonian Googlies
Across
8. Team that last won the World Series in 1979 : PIRATES
The Pittsburgh Pirates (nicknamed the Bucs or Buccos) joined baseball’s National League in 1887 just six years after the league was formed. The Pirates played in the first ever World Series in 1903, and won their first World Series in 1909.

15. Ancient Greek land that fought Sparta : ARCADIA
Arcadia is a mountainous region of Ancient Greece that was noted in times past for the innocence and contentment of its people who lived a simple, pastoral life. “Arcadia” has been used ever since as the name of a place offering peace and simplicity.

16. Weaver of Greek mythology : ARACHNE
In Greek and Roman mythology, Arachne was a mortal woman who was a great weaver. Arachne boasted that her weaving was greater than that of the goddess Athena (or Minerva in Roman myth), and this was proven true in a contest. As a result, Arachne was turned into a spider by Athena. “Arachne” is the Greek word for spider.

19. Personae non gratae : PARIAHS
“Pariah” is an anglicized version of the Tamil word “Paraiyar”. The Paraiyar are a social group of about 9 million people found in some Indian states and in Sri Lanka. The term “pariah” came to be a general term for members of the lowest caste in society, outcasts.

22. Often-repeated line : MANTRA
A “mantra” is a word that is used as a focus for the mind while meditating. The term is Sanskrit in origin, and is now used figuratively in English to describe any oft-repeated word or phrase.

29. Spanish muralist José María ___ : SERT
José Maria Sert was a painter of murals from Catalan. He was a good friend of fellow-artist Salvador Dali.

35. Part of a watch that holds the face’s glass cover : BEZEL
A bezel is a groove which is designed to hold a beveled edge. An example would be the groove around the face of a watch, which accepts the beveled edge of a watch crystal.

37. ___-dieu : PRIE
Prie-dieu literally means “pray (to) God” in French. A prie-dieu is basically a padded kneeler, with an armrest in front and a shelf on which one placed books of prayer.

43. Thickening agent in cookery : TAPIOCA
The cassava plant is a woody shrub native to South America grown largely for its carbohydrate-rich tubers. In fact, the cassava is the third largest food source of carbohydrates (for humans) in the world. Ordinarily, that carbohydrate is extracted from the plant, dried as flour and is called tapioca.

46. Recipient of a Mailer-Daemon notice : SENDER
In the world of email, a mailer-daemon is a program that sends out an auto reply to an email sender when the original message bounces, does not reach the intended sender.

47. Saucy name? : ALFREDO
Alfredo sauce is usually associated with the Italian dish called fettuccine Alfredo. The sauce is made from Parmesan cheese and butter, and is named for the Italian restaurant owner Alfredo Di Lelio. Di Lelio’s nephews still own and run a restaurant in Rome called “Il Vero Alfredo”. Here in the US, we often add other ingredients to the basic cheese and butter recipe. The name “fettuccine Alfredo” won’t be found on a menu in Italy today, and instead one can order “fettuccine al burro”.

52. Puerto Rican home to the Western Hemisphere’s largest radio telescope : ARECIBO
The Arecibo Observatory in Puerto Rico is home to a large radio-telescope. There’s a fair chance you’ve seen the observatory on the big screen as it was featured prominently in the James Bond film “GoldenEye”, and also in the Jodie Foster movie “Contact”.

Down
4. “Understand?” : CAPISCE?
“Capeesh?” is a slang term meaning “do you understand?” It comes from the Italian “capisce” meaning “understand”.

6. Bleachers blaster : AIR HORN
At a sports event one might sit in the bleachers. “Bleachers” is a particularly American term used to describe the tiered stands that provide seating for spectators. These seats were originally wooden planks, and as they were uncovered they would be “bleached” by the sun, giving them the name we use today. Sometimes the fans using the bleachers might be referred to as “bleacherites”.

8. Amazon rodent : PACA
There are two species of rodents called pacas, and both are found in Central and South America. In some parts, paca is considered a gourmet dish.

9. Athlete among athletes : IRONMAN
An Ironman Triathlon is a race involving a 2.4 mile swim, a 112 mile bike ride, and a marathon run of just over 26 miles. The idea for the race came out of a debate between some runners in the 1977 Oahu Perimeter Relay. They were questioning whether runners, swimmers or bikers were the most fit athletes. The debaters decided to combine three local events to determine the answer, inviting athletes from all three disciplines. The events that were mimicked to come up with the first triathlon were the Waikiki Roughwater swim (2.4 miles), the Around-Oahu Bike Race (115 miles) and the Honolulu Marathon (26.2 miles). The idea was that whoever finished first would be called “the Iron Man”. The first triathlon was run in 1978, with fifteen starters and only twelve finishers. The race format is used all over the world now, but the Hawaiian Ironman is the event that everyone wants to win.

12. Heraldic emblem of Scotland : THISTLE
The thistle may be considered a weed, but Scots are very proud to have it as the national flower of Scotland.

28. 1975 Best Musical, with “The” : WIZ
“The Wiz”, the 1975 musical, was written by Charlie Smalls and is an African-American adaptation of Baum’s “The Wonderful Wizard of Oz”. The film version of the stage show was released in 1978, starring Diana Ross as Dorothy and Michael Jackson as the Scarecrow. I haven’t seen it, though. “The Wizard of Oz” scares me, as the flying monkeys creep me out. There, I’ve admitted it in public …

31. Open-sided shelters : RAMADAS
A ramada is a shelter with a roof and no walls, and is mainly found in the American southwest. Nowadays, the shelter can be temporary or permanent, but originally ramadas were makeshift shelters constructed by aboriginal Indians from branches or bushes.

34. “Evita” lyricist : TIM RICE
Tim Rice is most famous as a lyricist, with his most celebrated collaborations being with Andrew Lloyd Webber. Lloyd Webber and Rice together wrote the hit musicals “Joseph and the Amazing Technicolor Dreamcoat”, “Jesus Christ Superstar” and “Evita”.

42. Kind of roast : WEENIE
What we call a wiener in this country is known as a Vienna sausage in Germany. It was first produced by a butcher from Frankfurt who was living in Vienna, hence the name “Wiener”, which is German for “of Vienna”. Paradoxically, the same sausage is called a Frankfurter in Vienna, as it was created by someone from Frankfurt. It’s all very confusing …

44. Singer Clark : PETULA
Petula Clark is a an English singer of popular songs who had most of her success in the sixties, with hits such as “Downtown” and “I Know a Place”. Clark is a little unusual in the world of entertainment as she started to make recordings in French as well as English, and eventually in German, Italian and Spanish as well. For decades now, Clark has been splitting her time between her properties in England, France and Switzerland.

48. Baja bears : OSOS
Baja California is both the most northern and the most western of the Mexican states. The name translates from Spanish as “Lower California”.

49. Places where black-eyed Susans grow : LEAS
Black-eyed Susan is the name given to a number of herbs and garden flowers that are native to North America. All are members of the sunflower family and have flowers with yellow petals and a brown center.