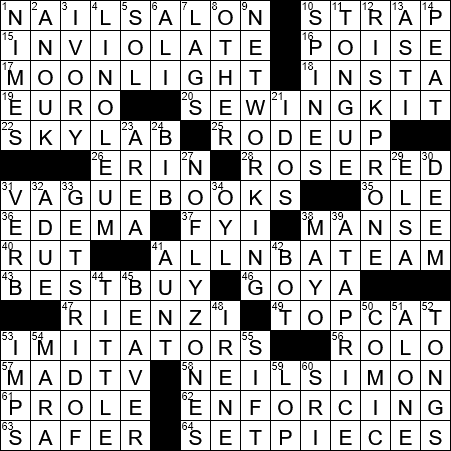 Today’s Wiki-est, Amazonian Googlies
Across
1. Filing station? : NAIL SALON
Emery is a very hard type of rock that is crushed for use as an abrasive. Emery paper is made by gluing small particles of emery to paper. Emery boards are just emery paper with a cardboard backing. And emery boards are primarily used for filing nails.

17. 2016 film that won Best Picture : MOONLIGHT
“Moonlight” is a 2016 semi-autobiographical film based on an unpublished play by Tarell Alvin McCraney titled “In Moonlight Black Boys Look Blue”. “Moonlight” won the season’s Best Picture Oscar, thus becoming the first film to do so with an all-black cast, and the first with an LGBT storyline.

18. Photo app, slangily : INSTA
Instagram is a photo-sharing application, one that is extremely popular. Instagram was started in San Francisco in 2010. Facebook purchased Instagram two years later, paying $1 billion. The billion-dollar Instagram company had just 13 employees at the time of the sale …

19. It’s a little less than a pound : EURO
The Euro is the official currency of most of the states in the European Union, but not all. The list of states not using the Euro includes the UK, Denmark, Sweden and Norway.

22. NASA project launched in 1973 : SKYLAB
Skylab was sent into orbit by NASA in 1973 and continued to circle the Earth there until 1979. Although it was in orbit for many years, Skylab was only occupied by astronauts for 171 days, in three missions in 1973-1974. Skylab burned up in the Earth’s atmosphere a lot earlier than expected, showering some huge chunks of debris on our friends in Australia.

26. CNN host Burnett : ERIN
Erin Burnett is a television journalist and the host of her own show on CNN called “Erin Burnett OutFront”. Apparently Burnett also used to show up occasionally as advisor to Donald Trump on “The Celebrity Apprentice”.

28. Fairy tale sister : ROSE-RED
“Snow White” is a traditional German fairy tale that was published in 1812 in the collection of the Brothers Grimm. There is also a second, very different Grimms’ Fairy Tale called “Snow-White and Rose-Red”, not to be confused with its more famous cousin. In the latter tale, Snow-White and Rose-Red are sisters who get into trouble with a dwarf, but are rescued by a bear who turns into a prince.

36. Swelling : EDEMA
Both animals and plants can suffer from edema, which is a swelling caused by excessive accumulation of fluid.

41. Kobe Bryant made it 15 times : ALL-NBA TEAM
Kobe Bryant plays basketball for the LA Lakers. Kobe Bryant got his name from a menu would you believe? His parents were in a Japanese restaurant and liked the name of “Kobe” beef, the beef from around the city of Kobe on the island of Honshu in Japan.

43. Geek Squad company : BEST BUY
Best Buy is a retailer specializing in the supply of consumer electronics. Best Buy services include the famous “Geek Squad”, a band of technical experts that will help solve your computer and other consumer electronic problems.

46. Court painter of Charles IV of Spain : GOYA
Francisco Goya was a Spanish painter, often called the last of the Old Masters and the first of the moderns. Two of Goya’s most famous works are “The Nude Maja” and “The Clothed Maja”.

47. Title Roman tribune of an early Wagner opera : RIENZI
“Rienzi” is an early opera by Richard Wagner that was first performed when he was about 30 years old. The version of “Rienzi” that premiered in the Dresden Opera House ran for over six hours!

49. Hanna-Barbera feline : TOP CAT
“Top Cat” is one of the first cartoon shows that I remember watching regularly. It was a Hanna-Barbera production that had an original run from 1961 to 1962, in which 30 episodes were made. Top Cat is the leader of a gang of alley cats in Manhattan, New York. The gang frequently came up against NYPD police officer Charlie Dibble, my favorite character in the show.

56. Chocolate/caramel candy : ROLO
Rolo was a hugely popular chocolate candy in Ireland when I was growing up. Rolo was introduced in the thirties in the UK, and is produced under license in the US by Hershey. I was a little disappointed when I had my first taste of the American version as the center is very hard and chewy. The recipe used on the other side of the Atlantic calls for a soft gooey center.

57. Show on which Key and Peele got their start : MADTV
“MADtv” is a television sketch show that ran for fourteen seasons starting in 1995. The show had nothing to do with the famous “Mad” magazine, although it did license the name and logo from the publication.

58. “Promises, Promises” writer : NEIL SIMON
Neil Simon is one of my favorite playwrights. Simon has written over thirty plays and about thirty screenplays. He has received more nominations for Oscars and Tony Awards than any other writer. My favorite play penned by Simon has to be “Brighton Beach Memoirs”, but the list of his great stage works seems endless and includes “Barefoot in the Park”, “The Odd Couple”, “Sweet Charity”, “Plaza Suite”, “California Suite”, “Biloxi Blues” and “The Goodbye Girl”.

61. Member of the working class : PROLE
George Orwell introduced us to the “proles”, the working class folk in his famous novel “Nineteen Eighty-Four”. Collectively, the proles make up the section of society known as the proletariat.

2. Actress Aimée : ANOUK
Anouk Aimée is a French film actress. Aimée’s most famous film outside of France is probably the internationally successful 1966 French hit “A Man and a Woman”, in which she played the female lead.

4. Flooring option : LINOLEUM
“Lino” (short for “linoleum”) was originally made by coating canvas with solidified linseed oil. The product’s inventor, Englishman Frederick Walton, give it the name “linoleum” from “linum” and “oleum”, the Latin for “linen” and “oil”.

10. Things seen on a bookshelf : SPINES
In the US, the convention is to write the title on the spine of a book from top-to-bottom. In most of Europe, the convention is to write the title from bottom-to-top. We have a lot of books in the “library” in our house from both sides of the Atlantic, and so there is much moving of the head from left to right as we glance along our bookshelves.

13. Piedmont city famous for its sparkling wine : ASTI
Asti is a sparkling white wine from the Piedmont region of Italy, and is named for the town of Asti around which the wine is produced. The wine used to be called Asti Spumante, and it had a very bad reputation as a “poor man’s champagne”. The “Spumante” was dropped in a marketing attempt at rebranding associated with a reduction in the amount of residual sugar in the wine.

14. Three follower, in sports : -PEAT
A “three-peat” is the winning of a sports championship three seasons in a row.

23. Bailiwick : AREA
“Bailiwick” is a word dating back to the mid-1600s, and originally meant the “district of a bailiff”.

24. Lobster catcher? : BIB
The word “bib” comes from the Latin “bibere” meaning “to drink”, as does our word “imbibe”. So, maybe it’s less about spilling the food, and more about soaking up the booze …

29. Lohengrin’s love : ELSA
We’ve often heard the “Bridal Chorus” from Richard Wagner’s opera “Lohengrin”. It’s the tune to “Here comes the bride …” played regularly at the start of wedding ceremonies as the bride walks down the aisle. In the opera the “Bridal Chorus” is sung not at the start of the ceremony but afterwards, by the women of the wedding party as they accompany Elsa to the bridal chamber.

32. Together, in music : A DUE
“A due” is a musical term meaning “together”, and literally translates from Italian as “by two”.

33. Deep-sixes : GETS RID OF
To deep-six something is to toss it, possibly overboard from a boat, or to completely destroy it. The derivation of this slang term is from “six feet deep”, not the length of a fathom but rather the traditional depth of a grave.

34. “Thimble Theatre” surname : OYL
Popeye first appeared in 1929 in a comic strip called “Thimble Theatre”. The strip, created by E. C. Segar, ran for ten years before Popeye made an appearance. Popeye received such a great welcome from readers that he soon “took over” the strip, and eventually even hogged the strip’s title. Before Popeye turned up, Olive Oyl was the main character.

38. Part of a club : MAYO
Mayonnaise originated in the town of Mahon in Menorca, a Mediterranean island belonging to Spain. The Spanish called the sauce “salsa mahonesa” after the town, and this morphed into the French word “mayonnaise” that we use in English today.

42. What may have a strong net effect? : BOT
A bot is computer program that is designed to imitate human behavior. It might crawl around the Web doing searches for example, or it might participate in discussions in chat rooms by giving pre-programmed responses. It might also act as a competitor in a computer game.

44. “i” dot : TITTLE
A “tittle” is a small diacritical mark used in writing, such as a cedilla or tilde used in some languages, or the dot over the lowercase letters i and j in English.

45. Oregon State mascot : BEAVER
The athletic teams of Oregon State University are known as the Beavers. The big rivals to the Beavers are the Ducks of the University of Oregon, a rivalry that has been dubbed “the Civil War”. The two schools’ football teams play a game every year for the Platypus Trophy.

48. Woman’s name meaning “peace” : IRENE
Eirene (also “Irene”) was the Greek goddess of peace, with “eirene” being the Greek word for “peace”. The Roman equivalent to Eirene was the goddess Pax.

52. Blacksmith’s tool : TONGS
A pair of tongs is a tool with a scissor-like hinge used to pick up things, like meat cooking on a barbecue grill or ice from an ice bucket. The verb “to tong” means “to handle with tongs”.

The hit TV show “House of Cards” is a political drama starring Kevin Spacey that highlights ruthless manipulation within the corridors of power in Washington, D.C. The show is an adaptation of a BBC miniseries of the same name, which in turn is based on a novel by Michael Dobbs. My wife and I have seen both versions of the show but disagree on which is the best. I favor the US version …

60. ___ Lankan : SRI
The island nation of Sri Lanka lies off the southeast coast of India. The name “Sri Lanka” translates from Sanskrit into English as “venerable island”. Before 1970, Sri Lanka was known as Ceylon, a name given to the country during British rule.