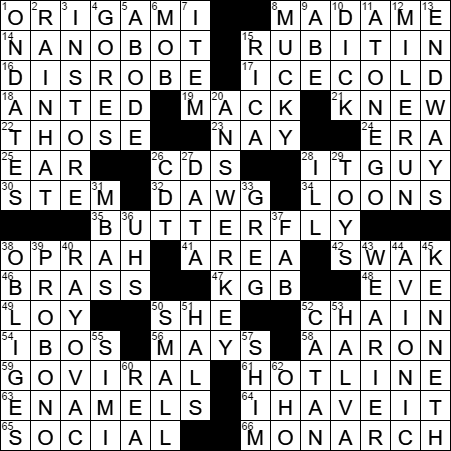 CROSSWORD CONSTRUCTOR: Bruce Haight
THEME: Butterfly
We have some grid art today, with the black squares in the middle of the grid depicting four BUTTERFLIES fluttering across the puzzle. Today’s themed answers are found at the top and bottom edges of the grid, and each requires the word BUTTERFLY in order to make sense:

1A. Insect made of paper : ORIGAMI (butterfly)
8A. Puccini opera : MADAME (Butterfly)
65A. One going from party to party : SOCIAL (butterfly)
66A. Orange, black and white flutterer : MONARCH (butterfly)

Today’s Wiki-est, Amazonian Googlies
Across
1. Insect made of paper : ORIGAMI (butterfly)
Origami is the traditional Japanese art form of paper folding. The best-known example of the craft is the paper crane. The word “origami” is derived from “ori“ (folding) and “kami” (paper).

8. Puccini opera : MADAME (Butterfly)
Puccini’s “Madama Butterfly” is the most-performed opera in the US. The opera that we see today is actually the second version that Puccini produced. The original version was first staged in 1904 at La Scala in Milan where it received a very poor reception. Puccini reworked the piece, breaking the second act into two new acts and making some other significant changes. The opera was relaunched a few months later and it was a resounding success.

14. Microscopic machine : NANOBOT
Nanorobots (also “nanobots”) are tiny devices that range from 0.1 to 10 micrometers in size. The technology of nanorobotics is in its infancy, but it is hoped that nanobots might be used (for example) in medicine one day. The oft-cited application is the use of nanobots inserted inside the body to identify and destroy cancer cells.

19. Vehicle company with a bulldog logo : MACK
Mack Trucks was founded by John Mack in the early 1900s, after he had spent some years working in companies that made carriages and electric motor cars. Along with his two brothers, Mack started their company to focus on building heavy-duty trucks and engines.

25. Site of a van Gogh bandage : EAR
Vincent van Gogh was visited by fellow-artist Paul Gauguin in Arles in 1888. At one point the two argued quite violently, with van Gogh eventually threatening his friend with a razor blade. In a panic, van Gogh fled the house and made his way to a local brothel. Famously, that night he cut off his own left ear.

30. Component not found on a digital watch : STEM
The stem of a watch is the shaft that projects from the body and which is used to wind the mechanism. Prior to the introduction of stem watches, the timepieces were wound up using a key.

34. Whack jobs : LOONS
The slang term “loon” for a deranged person probably comes from the loud cry of the bird, the loon, but it is also probably influenced by the word “lunatic”.

38. The “O” of the magazine O : OPRAH
The full name of the publication usually called “O”, is “O: The Oprah Magazine”. Since the magazine’s founding in 2000, Oprah has appeared alone on the cover of each issue, with two exceptions. On the April 2009 cover Oprah was shown with First Lady Michelle Obama, and on the December 2009 cover Oprah shared the limelight with Ellen DeGeneres.

41. Calculus calculation : AREA
The Latin word “calculus” was originally used for a reckoning or an account, and originally applied to a pebble that was used to maintain a count. The Latin word came from the Greek for a pebble, “khalix”.

42. Letters on love letters : SWAK
SWAK is an initialism standing for “sealed with a kiss”. SWAK, and the related SWALK (sealed with a loving kiss), are postal acronyms that originated during WWII.

47. Spy org. in Bond movies : KGB
The Komitet gosudarstvennoy bezopasnosti (KGB) was the national security agency of the Soviet Union until 1991. The KGB was dissolved after the agency’s chairman led a failed attempt at a coup d’état designed to depose President Mikhail Gorbachev.

49. Myrna of “The Thin Man” : LOY
The beautiful Myrna Loy was one of my favorite actresses. Her career took off when she was paired up with William Powell in the fabulous “The Thin Man” series of films. Loy also appeared opposite Cary Grant in a couple of films that I like to watch every so often, namely “The Bachelor and the Bobby-Soxer” (1947) and “Mr. Blandings Builds His Dream House” (1948).

50. Seashell seller of a tongue twister : SHE

52. Applebee’s or Subway : CHAIN
The Applebee’s chain of “Neighborhood Bar & Grill” restaurants was founded in 1980, with the first Applebee’s eatery opening in Decatur, Georgia. When it comes to “chain” restaurants, I like Applebee’s …

54. Some native Nigerians : IBOS
The Igbo (or Ibo) people are an ethnic group living in southeastern Nigeria.

56. Willie who’s #5 in career home runs : MAYS
Willie Mays’ nickname was the “Say Hey Kid”, although his friends and teammates were more likely to refer to him as “Buck”. When Mays was inducted into the Baseball Hall of Fame, he was asked who was the best player he’d ever seen in the game. He replied, “I don’t mean to be bashful, but I was.”

58. Hank who’s #2 in career home runs : AARON
The great Hank Aaron (“Hammerin’ Hank” or “the Hammer”) has many claims to fame. One notable fact is that he is the last major league baseball player to have also played in the Negro League.

66. Orange, black and white flutterer : MONARCH (butterfly)
The monarch butterfly has very recognizable orange and black wings, and is often seen across North America. The monarch is the state insect of several US states and was even nominated as the national insect in 1990, but that legislation was not enacted.

7. Brangelina, once : ITEM
“Brangelina” is a portmanteau used for the super-couple pairing of actors Brad Pitt and Angelina Jolie. Other supercouples are/were:

9. Presidential nickname : ABE
Abraham Lincoln was the sixteenth President of the US. There are several stories told about how he earned the nickname “Honest Abe”. One story dates back to early in his career as a lawyer. Lincoln accidentally overcharged a client and then walked miles in order to right the wrong as soon as possible.

10. Presidential nickname : DICK
President Richard Milhous Nixon (RMN) used “Milhous” in his name in honor of his mother Hannah Milhous. Richard was born in a house in Yorba Linda, California. You can visit that house today as it is on the grounds of the Richard Nixon Presidential Library. It’s a really interesting way to spend a few hours if you ever get to Yorba Linda …

12. Event that once had a four-minute “barrier” : MILE RUN
The 4-minute barrier for the mile run was first broken in 1954 by Roger Bannister, when he finished in just over 3m 59s. The record for males now stands at 3m 43s. If you plan on running a 4-minute mile, you should probably be warned that this means you have to run the whole race at an average speed of over 15 mph (do the math!).

27. It may be stored on the cloud : DATA
In the world of computing, when one operates “in the cloud”, one’s files and key applications are not stored on one’s own computer, but rather are residing “in the cloud”, on a computer somewhere out on the Internet. I do 90% of my computing in the cloud. That way I don’t have to worry about backing up files, and I can operate from any computer if I have to …

29. Pole workers’ creations : TOYS
Those would be Santa’s elves.

33. Eldest of the Brady boys : GREG
The character Greg Brady is the oldest Brady son in the sitcom “The Brady Bunch”. Greg was played by Barry Williams in the TV show. It was revealed in spin-offs of the original sitcom that Greg married a nurse and became an obstetrician.

37. Adjective for the Beatles : FAB
The Beatles were described on the sleeve notes of their 1963 album “With the Beatles” as the “fabulous foursome”. The press picked up on the phrase and morphed it into “the Fab Four”.

39. How legal aid lawyers work : PRO BONO
The Latin term “pro bono publico” means “for the public good”, and is usually shortened to “pro bono”. The term applies to professional work that is done for free or at a reduced fee as a service to the public.

44. Pertaining to aircraft technology : AVIONIC
Avionics are electronic systems installed in aircraft. Some of those avionics are collision avoidance systems. Such safety systems may include radar, and equipment that uses transponder signals.

45. Starr with a 1998 report : KENNETH
Ken Starr has to be one of the most famous lawyers in recent history, due to his tenure as Independent Counsel when President Bill Clinton was in office. Starr’s original brief was to investigate the suicide of White House Counsel Vince Foster as well as to continue the investigation of the Whitewater controversy in which then-Governor Clinton was accused of applying pressure to arrange an illegal loan to one of his partners in the Whitewater land deal. Famously, Starr’s purview was extended to include an investigation into President Clinton’s extramarital affair with Monica Lewinsky, to determine if the President had lied under oath about his relationship with the young intern.

52. Settlement-building board game, informally : CATAN
The Settlers of Catan is a board game that was introduced in 1995, in Germany as “Die Siedler von Catan”. The game is very popular in the US and was called “the board game of our time” by the “Washington Post”. My son plays it a lot, and as a lover of board games, I am going to have to check it out …

53. Sesame-seed-and-honey confection : HALVA
Halvas are sweet confections found in many parts of the world. Halvas are generally flour-based or based on nut-butter like sesame paste. Sounds delicious …

55. ___ Valley (Reagan Library locale) : SIMI
Nowadays, Simi Valley, California is perhaps best known as home to the Ronald Reagan Presidential Library. The library is a great place to visit, and there you can tour one of the retired Air Force One planes.

60. Stephen of “Citizen X” : REA
Stephen Rea is an Irish actor from Belfast. Rea’s most successful role was Fergus in 1992’s “The Crying Game”, for which performance he was nominated for the Best Actor Oscar. In “The Crying Game”, Fergus was a member of the IRA. In real life, Rea was married to IRA bomber and hunger striker Dolours Price at the time he made the movie.

“Citizen X” is a 1995 TV movie, a crime thriller about a seven-year hunt by Soviet authorities for for a Russian serial killer who murdered 53 women and children. Stars of the film are Stephen Rea, Donald Sutherland and Max von Sydow.