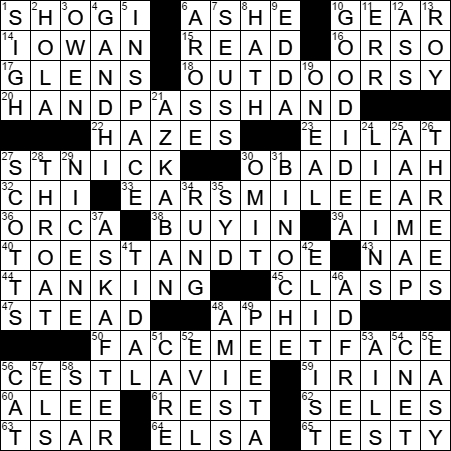 CROSSWORD CONSTRUCTOR: Ruth B. Margolin
THEME: Verb Noun to Noun
Our themed answers today are phrases in the format VERB NOUN TO NOUN, where the NOUN is repeated. In the grid we take the VERB NOUN combination and add it to the end of the NOUN, visually giving us VERB NOUN (added) TO NOUN:

Today’s Wiki-est, Amazonian Googlies
Across
1. Japanese chess : SHOGI
Shogi is a game that is also known as Japanese Chess. The name “shogi” translates as “general’s board game”.

6. Name attached to a North Carolina “-ville” : ASHE
Samuel Ashe was the Governor of North Carolina from 1795 to 1798. North Carolina’s Ashe County and the cities of Asheboro and Asheville are named in his honor.

14. Hawkeye : IOWAN
Iowa is nicknamed the Hawkeye State in honor of Chief Black Hawk, a leader of the Sauk people during the War of 1812 and the Black Hawk War.

15. Enjoy Wilde or Wilder, say : READ
If you didn’t know Oscar Wilde was Irish, you will when you see the name he was given at birth: Oscar Fingal O’Flahertie Wills Wilde!

23. Israeli resort city : EILAT
Eilat (sometimes “Elat”) the most southerly city in Israel, sitting right at the northern tip of the Red Sea, on the Gulf of Aqaba.

27. One flying during the holiday season, informally : ST NICK
Saint Nicholas of Myra is the inspiration for Santa Claus. Nicholas was the Bishop of Myra (now in modern-day Turkey) during the 4th century AD, and was known for being generous to the poor. Centuries after he died, his remains were desecrated by Italian sailors and moved to Bari in Italy. One legend has it that the relics were moved again centuries later and reburied in the grounds of Jerpoint Abbey in Co. Kilkenny in Ireland, where you can visit the grave today. I choose to believe that Santa Claus’s relics are indeed buried in Ireland …

30. Book of the Bible after Amos : OBADIAH
The Book of Obadiah is the shortest book in the Hebrew Bible, consisting of just one chapter that is divided into 21 verses.

36. Menace with four-inch teeth : ORCA
The taxonomic name for the killer whale is Orcinus orca. The use of the name “orca”, rather than “killer whale”, is becoming more and more common. The Latin word “Orcinus” means “belonging to Orcus”, with Orcus being the name for the Kingdom of the Dead.

43. Typical Scottish Brexit vote : NAE
“Nae” is the Scottish vernacular for “no”.

The UK held a referendum in June 2016 in which 52% of voters chose to leave the European Union (EU). The term “Brexit” was used for the vote, a portmanteau of “Britain” and “exit”. The vote has led to some debate about the future of the UK. The Scottish electorate voted for the UK to stay in the EU, and so that revived speculation about Scotland leaving the UK. There’s also some discussion about Northern Ireland’s future in the UK, as the Northern Irish electorate also voted to stay in the EU.

48. Honeydew producer : APHID
Honeydew is a sugary liquid secreted by some insects (such as aphids) when they feed on plant sap.

50. Rendezvous : FACE MEET FACE (meet face to face)
A rendezvous is a meeting, from the French “rendez vous” meaning “present yourselves”.

62. Palindromic tennis champ : SELES
Monica Seles has a Hungarian name as she was born to Hungarian parents, in former Yugoslavia. Seles was the World No. 1 professional tennis player in 1991 and 1992 before being forced from the sport when she was stabbed by a spectator at a match in 1993. She did return to the game two years later, but never achieved the same level of success.

63. Pre-Red head : TSAR
The former Soviet Union (USSR) was created in 1922, not long after the Russian Revolution of 1917 that overthrew the Tsar. Geographically, the new Soviet Union was roughly equivalent to the old Russian Empire, and comprised fifteen Soviet Socialist Republics (SSRs).

64. “Frozen” princess : ELSA
“Frozen” is a 2013 animated feature from Walt Disney Studios that is based on the Hans Christian Andersen fairy tale “The Snow Queen”.

Down
3. John Irving’s “A Prayer for ___ Meany” : OWEN
“A Prayer for Owen Meany” is a novel by John Irving, first published in 1989. Although Irving’s work is an independent story, it is written as a homage to “The Tin Drum” by Günter Grass.

4. Who said “The best way to find yourself is to lose yourself in the service of others” : GANDHI
Mohandas Gandhi was a political and spiritual leader in India in the first part of the 20th century, as the country sought independence from Britain. He was also referred to as “Mahatma”, meaning “great soul”. His remarkable philosophy of nonviolence and living a modest lifestyle was a great inspiration to the Indian people. India (and Pakistan) was granted independence in 1947. Tragically, Gandhi was assassinated the very next year.

5. Where the Robinsons were lost on 1960s TV : IN SPACE
“Lost in Space” is a television sci-fi show that originally ran for three season from 1965 to 1968. There was also a “Lost in Space” movie released in 1998. The show was based on a comic book series called “Space Family Robinson”, which in turn was based on the Johann David Wyss novel “The Swiss Family Robinson”. Some oft-repeated lines from the show were uttered by the Robot character, including:

7. Doctor of letters? : SEUSS
“Dr. Seuss” was the pen name of Theodor Seuss Geisel. Geisel first used the pen name while studying at Dartmouth College and at the University of Oxford. Back then, he pronounced “Seuss” as it would be in German, i.e. rhyming with “voice”. After his books found success in the US, he went with the pronunciation being used widely by the public, quite happy to have a name that rhymed with “Mother Goose”.

9. Ancient Norse work : EDDA
The Poetic Edda and Prose Edda are two ancient works that are the source for much of Norse mythology. Both Eddas were written in the 13th century, in Iceland.

12. Balaam’s talking beast : ASS
The ass or donkey is mentioned several times in the Bible. One of the most-quoted biblical stories involving an ass is the story of Balaam. Balaam was a diviner who appears in the Book of Numbers in. In one account, Balaam is held to task by an angel for particularly cruel treatment of an ass.

13. Mr. Rogers : ROY
Cowboy actor and singer Roy Rogers’ real name was Leonard Franklin Slye, and his nickname was “King of the Cowboys”. Roy Rogers married Dale Evans in 1947. Evans’ nickname was “Queen of the West”.

21. Prison guarded by Dementors : AZKABAN
The titles of the seven “Harry Potter books are:

24. Some 1960s protests : LIE-INS
A die-in (also “lie-in”) is a protest in which those demonstrating lie on the ground and pretend to be dead. One of the more famous die-ins was held in Washington D.C. in 2007 to protest the Iraq War. There were several thousand protesters, almost two hundred of whom were arrested, including ten veterans of the Iraq War.

25. TripTik, e.g. : AAA MAP
“TripTik” is the brand name for customized travel maps provided by AAA for its members.

27. “Feed your lawn” brand : SCOTTS
Scotts Miracle-Gro Company was founded in 1868 by one Orlando Scott, initially selling seed to the agricultural industry. In the early 1900s, Scotts started to sell to homeowners, mainly supplying lawn seed. The company merged with the gardening company Miracle-Gro in 1955.

28. Place for a frog : THROAT
Having “a frog in one’s throat” is a temporary condition caused by excessive phlegm. The resulting “croaky” voice sounds similar to the sound made by a frog.

29. Christians’ ___ Creed : NICENE
What is known today in the Christian tradition as the Nicene Creed, was originally adopted by the first ecumenical council when it met in 325 AD. The meeting took place in the city of Nicaea, which gave its name to this particular profession of faith. Nicaea is the Greek name of the city that is now called Iznik, and it lies in the northwest of Turkey.

31. Juliette of “Chocolat” : BINOCHE
The wonderful Juliette Binoche is a French actress and dancer. Binoche is perhaps most recognized in the US for her Oscar-winning portrayal of Hana in the 1996 movie “The English Patient”. I must say that a favorite Binoche film of mine is the lighter “Dan in Real Life” from 2007.

52. Daredevil Knievel : EVEL
Daredevil Evel Knievel contracted hepatitis C from the many blood transfusions that he needed after injuries incurred during stunts. He had to have a liver transplant as a result, but his health declined after that. Knievel eventually passed away in 2007.

54. Popular tech review site : CNET
c|net is an excellent technology website. c|net started out in 1994 as a television network specializing in technology news. The host of “American Idol”, Ryan Seacrest, started off his career as host of a c|net show.

The historic commercial center of Chicago is known as the Loop. One theory is that the “loop” got its name from the cable loops in the city’s old cable car system.