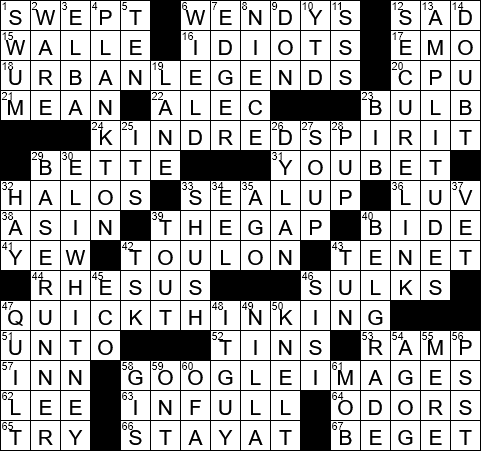 Each of today’s themed answers are common 2-word phrases that have been reinterpreted as 3 words. That is, a GAP (space) has been inserted into one of the words in the original phrase:

Famously, the Wendy’s chain of fast food restaurants was founded by Dave Thomas, in 1969 in Columbus, Ohio. Dave named his establishment after his fourth child, Melinda Lou “Wendy” Thomas.

“WALL-E” is a very cute Pixar movie, released in 2008. The hero of the piece is a robot called WALL-E, who loves his “Hello Dolly”, and who falls in love with another robot called EVE.

Emo Philips is a stand-up comedian from Chicago. He has had a long and successful career, and listed on his resume is a small acting part in the 1992 hit movie “Meet the Parents” starring Robert De Niro and Ben Stiller. Philips was also the executive producer for that very same film, so, I’d say he made a few pennies …

“Mind the Gap” is a very famous announcement made in several stations on the London Underground. The announcement is needed as there can be a large gap between the doorways of trains and the platform. This gap arises because the platforms of some stations are quite curved, while the train cars are of course straight.

As well as being a town on southern coast of France, Toulon is a military port and home to the French Mediterranean Fleet. In particular, it is the home port of the French Navy’s sole aircraft carrier, the Charles de Gaulle.

The Golden Rule is also known as the ethic of reciprocity, and is a basis for the concept of human rights. A version of the rule used in the Christian tradition is attributed to Jesus: “Do unto others as you would have them do unto you”.

The 1942 classic movie “Holiday Inn” stars Bing Crosby and Fred Astaire, and is noted for the song “White Christmas”. And yes, the movie is the inspiration for the name of the Holiday Inn chain of hotels.

The Google Images search engine was introduced in 2001. Apparently, Google developed the Images search service in response to the overwhelming number of Google text searches for images of Jennifer Lopez in an exotic green Versace dress that she wore to the 2000 Grammy Awards.

Robert E. Lee is renowned as a southern officer in the Civil War. Lee was a somewhat reluctant participant in the war in that he opposed the secession of his home state of Virginia from the Union. At the beginning of the war, President Lincoln invited Lee to take command of the whole Union Army but he declined, choosing instead to stay loyal to his home state. During the Civil War, Lee’s men referred to him affectionately as “Marse Robert”, with “marse” being slang for “master”.

Plankton are organisms that float in water and are incapable of swimming against a current. There are three general classifications of plankton:

Vichyssoise is a thick puréed potato soup that can be served hot, but is usually served cold. As well as potatoes, a classic vichyssoise contains leeks, onions, cream and chicken stock. Although the origin is disputed, it seems that the vichyssoise was invented in America, albeit by a French chef. That chef named his soup after the town of Vichy in France.

The inventor Eli Whitney is a best known for inventing the cotton gin. Whitney also came up with the important concept of “interchangeable parts”. Parts that are interchangeable can be swapped out of equipment or perhaps used in related designs.

The term “cotton gin” is a contraction of “cotton eng-ine”. The gin is a machine that mechanically separates cotton fibers from the cotton seed.

“Vet” is an abbreviation for “veterinarian”, a professional who treat animals for disease and injury. The word “veterinary” comes from the Latin “veterinae” meaning “working animals, beasts of burden”.

23. Something screwed into a lamp : BULB

53. Equipment for a motorcycle jump : RAMP

63. With nothing omitted : IN FULL

2. Ending with silver or soft : -WARE

12. It’s safe to click on a computer : SECURE LINK

29. Player on first, second or third : BASE RUNNER

47. Bedcover made of patches : QUILT