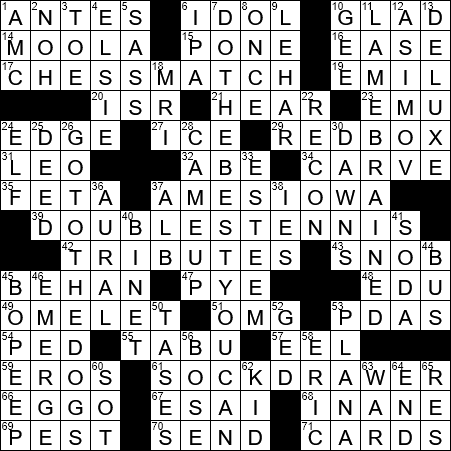 Each of today’s themed clues is in the format “Where x beats y”, where x and y appear to be holdings in a poker hand. However, the answer reveals that we aren’t referring to poker at all:

“Pone” is another word for corn bread, and comes from the Powhatan term “apan” meaning “something baked”.

17. Where a queen can beat a king : CHESS MATCH

In a chess match, a queen can place a king in checkmate.

“Emil and the Detectives” is a novel first published in 1929. It was originally written in German and was titled “Emil und die Detektive”. The Disney company released a screen adaptation in 1964.

The national intelligence agency of Israel is known as Mossad, which is short for HaMossad leModiʿin uleTafkidim Meyuḥadim (Hebrew for “Institute for Intelligence and Special Operations”).

“Sawbuck” is slang for a ten dollar bill. The term was applied to the bill as the Roman numeral X (which used to appear on the bill) resembles the end of sawhorse.

Iowa State University of Science and Technology (ISU) is located in Ames, Iowa. Among many other notable events, ISU created the country’s first school of veterinary medicine, in 1879. The sports teams of ISU are known as the Cyclones.

39. Where an ace can beat a pair : DOUBLES TENNIS

In doubles tennis, a server’s ace can beat a pair of opponents.

Brendan Behan was an Irish writer and playwright. His most famous work is probably “Borstal Boy”, which is an autobiographical novel. Borstal is a term used in the British Isles for juvenile detention. Behan was quite a character, famous for being a heavy drinker (“a drinker with a writing problem”, as he described himself). The drink eventually put him in an early grave, at 41 years old. I used to walk to school in Dublin right past the pub where he spent many hours every day.

Henry James Pye was an English poet who held the post of Poet Laureate from 1790 until his death in 1813. As Poet Laureate, Pye was the first with the title to receive an annual cash stipend, albeit a modest one. Prior to Pye, England’s Poet Laureates were given a annual stipend of a barrel of wine.

OMG is text-speak for “Oh My Gosh!” “Oh My Goodness!” or any other G-words you might think of …

53. Forerunners of smartphones, for short : PDAS

The Eel River in California was named in 1850 by an explorer Josiah Gregg after he made a trade with some Native Americans, swapping a frying pan for a large catch of eels.

61. Where two pair beats three of a kind : SOCK DRAWER

In a sock drawer, finding two matched pairs beats finding three socks of the one kind.

Eggo is the brand name of a line of frozen waffles made by Kellogg’s. When they were introduced in the 1930s, the name “Eggo” was chosen to promote the “egginess” of the batter. “Eggo” replaced the original name chosen, which was “Froffles”, created by melding “frozen” and “waffles”.

“Cockamamy” (sometimes “cockamamie”) is a slang term meaning “ridiculous, incredible”. The term goes back at least to 1946, but may have originated as a slang term used by children in New York City in 1920s.

“The Walking Dead” is a horror television show that is made by AMC that is based on a comic book series of the same name. There are lots of flesh-eating zombies featured, so I won’t be caught “dead” watching it …

Gout is caused by an elevation of the levels of uric acid in the blood. As a result of the high concentrations, the uric acid can crystallize out in tissue causing extreme discomfort. What we tend to call gout occurs when the crystals are deposited in the big toe.

Elsie the Cow is the mascot of the Borden Company. Elsie first appeared at the New York World’s Fair in 1939, introduced to symbolize the perfect dairy product. She is so famous and respected that she has been awarded the degrees of Doctor of Bovinity, Doctor fo Human Kindness and Doctor of Ecownomics. Elsie was also given a husband named Elmer the Bull. Elmer eventually moved over to the chemical division of Borden where he gave his name to Elmer’s Glue.

“Spruce Goose” is the familiar name given to the Hughes H-4 Hercules heavy transport plane, just one example of which was ever constructed. As the plane was built during WWII, wood was used instead of aluminum due to a shortage of the metal. That actual wood used was birch, but critics still used “Spruce Goose” as the name had a better ring to it. The Hercules has the largest wingspan of any aircraft ever built. You can go see it at the Evergreen Aviation Museum in McMinnville, Oregon.

Franz Lehar was a Hungarian composer who had a difficult relationship with the Nazi regime after it took control of his country. His wife was born Jewish, but converted to Catholicism. Fortunately for the Lehars, Hitler enjoyed the composer’s music and as a result Goebbels intervened and made Sophie Lehar “an honorary Aryan by marriage”.

“The Merry Widow” is an operetta composed by Franz Lehar. It is a comic piece about a rich widow and the attempts by her countrymen to marry her off in order to keep her fortune in the poverty-stricken Grand Duchy of Pontevedro. “The Merry Widow” was first performed in 1905 and has been popular ever since.

58. Holder of the Obama cabinet : ERIC

Dipsomania is a craving for alcohol to the point of damaging one’s health. “Dipsa” is the Greek for “thirst”, hence dipsomania is a “manic thirst”.

The famous line “Here’s looking at you, kid.” from 1942’s “Casablanca” was ranked no. 2 in a list of top movie quotes compiled by “The Hollywood Reporter”. The top of the list makes interesting reading, with the following comprising the top five:

17. Where a queen can beat a king : CHESS MATCH

27. Medium for some sculptures : ICE

39. Where an ace can beat a pair : DOUBLES TENNIS

53. Forerunners of smartphones, for short : PDAS

61. Where two pair beats three of a kind : SOCK DRAWER

71. What hands are composed of : CARDS

24. One with pointy ears and shoes : ELF

28. Was mentioned, as in conversation : CAME UP

58. Holder of the Obama cabinet : ERIC