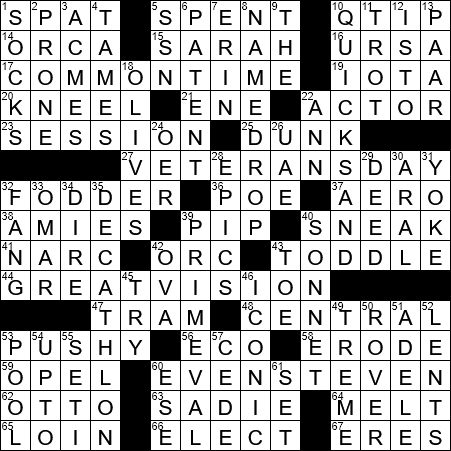 Each of today’s themed clues is in the format “number/number”:

Cotton swabs were originally marketed under the name Baby Gays, but this was changed in 1926 to Q-Tips, with the Q standing for “quality”.

Iota is the ninth letter in the Greek alphabet. We use the word “iota” to portray something very small as it is the smallest of all Greek letters.

20. Prepare to be knighted : KNEEL

The rite of passage that conferred knighthood on an apprentice was known as the ”accolade” or “dubbing” back in the Middle of Ages. Part of that ceremony is still used today, including the tapping of the flat side of a sword by a monarch on the shoulders of the new knight.

There are many, many colorful theories for the origins of the expression “break a leg”, used in the world of theater to mean “good luck”. Regardless of the origin, what is clear is that using the phrase “good luck” is considered to be very bad luck.

In basketball, a player makes “slam dunk” by jumping up and powering the ball downward into the basket with his or her hands over the rim. The term “slam dunk” was coined by Chick Hearn, an announcer for the L.A. Lakers. The NBA even holds an annual Slam Dunk Contest.

32. Hay and such for farm animals : FODDER

The novel “Great Expectations” by Charles Dickens is written in the first person, through the eyes of the hero of the piece, a young orphan boy called Pip.

62. “The Simpsons” character with a palindromic name : OTTO

Ireland is often referred to as the “Emerald Isle” (and described as “green”) because of all that green grass that grows due to the seemingly non-stop rain.

The words “o’er the land of the free” come from “The Star-Spangled Banner” written by Francis Scott Key.

The lyrics of “The Star-Spangled Banner” were written first as a poem by Francis Scott Key. Key’s inspiration was the bombarding by the British of the American forces at Fort McHenry that he witnessed during the Battle of Baltimore in September 1814. The words were then set to the tune of a popular British drinking song penned by John Stafford Smith called “The Anacreontic Song”, with the Anacreontic Society being a men’s club in London.

Dubai is one of the seven Emirates that make up the federation known as the United Arab Emirates (UAE). The two largest members of the UAE (geographically) are Dubai and Abu Dhabi, the only two of the seven members that have veto power over UAE policy.

The commercial game of Monopoly is supposedly a remake of “The Landlord’s Game” created in 1903 by a Quaker woman called Lizzie Phillips. Phillips used her game as a tool to explain the single tax theory of American economist Henry George. The Landlord’s Game was first produced commercially in 1924. The incredibly successful derivative game called Monopoly was introduced in 1933 by Charles Darrow, who became a very rich man when Parker Brothers bought the rights to the game just two years later in 1935.

The Gold Glove is an annual award given by Major League Baseball to the player judged to be the best in each fielding position in a season. The award was instituted in 1957 by the baseball glove manufacturer Rawlings.

“Treme” is an HBO series set in the Tremé neighborhood of New Orleans. The show deals with the rebuilding of lives and culture are the devastation of Hurricane Katrina in 2005.

In Latin, the Christian season that is now called Lent was termed “quadragesima” (meaning “fortieth”), a reference to the forty days that Jesus spent in the desert before beginning his public ministry. When the church began its move in the Middle Ages towards using the vernacular, the term “Lent” was introduced. “Lent” comes from “lenz”, the German word for “spring”.

SETI is the name given to a number of projects that are searching for extraterrestrial life. The acronym stands for “search for extraterrestrial intelligence”. One of the main SETI activities is the monitoring of electromagnetic radiation (such as radio waves) reaching the Earth in the hope of finding a transmission from a civilization in another world.

“Contact” is a sci-fi novel by Carl Sagan that was first published in 1985. Sagan had written “Contact” originally as a screenplay in 1979, but when plans for the film stalled, Sagan decided to go ahead and create the novel. An excellent film did eventually hit the theaters in 1997, and starred Jodie Foster.

20. Prepare to be knighted : KNEEL

32. Hay and such for farm animals : FODDER

62. “The Simpsons” character with a palindromic name : OTTO

4. Takes the wildness out of : TAMES

9. Word ignored when alphabetizing : THE

10. Something that gives you a sinking feeling : QUICKSAND

60. Suffix in many language names : -ESE