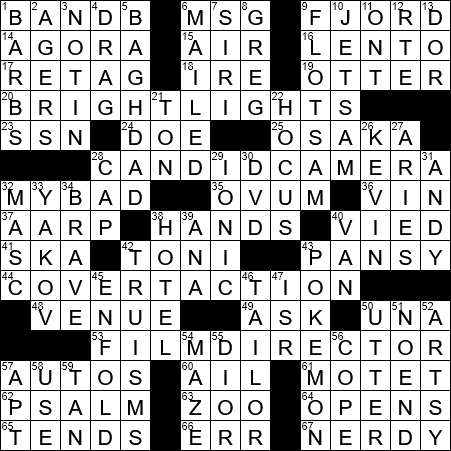 The ending words of today’s themed answers give us the phrase “LIGHTS, CAMERA, ACTION!”, an on-set cue uttered by FILM DIRECTORS:

An intimate inn (in the US) is a bed & breakfast (B&B). A bed & breakfast back in Ireland is traditionally more basic, and at least used to be much cheaper than a comparable hotel room.

9. Sight on the coast of Norway : FJORD

In early Greece the agora was a place of assembly. The assemblies held there were often quite formal, perhaps for the reading of a proclamation. Later in Greek history, things became less formal as the agora evolved into a market place. Our contemporary word “agoraphobia” comes from these agorae, in the sense that an agoraphobe has a fear of open spaces, a fear of “public meeting places”.

A “lento” passage is a piece of music that has a slow tempo.

19. Animal that frolics in streams : OTTER

A fawn is a young deer, one usually less than a year old.

The hidden-camera prank show called “Candid Camera” was created and produced by Allen Funt, and first aired on television in 1948. The show actually started as “Candid Microphone”, a radio series that was broadcast from 1947 until it was eclipsed by the television version.

The writer Toni Morrison won the Nobel Prize for Literature in 1993. Amongst other things, Morrison is noted for coining the phrase, “our first black President”, a reference to President Bill Clinton.

The garden flower called the “pansy” takes its name from the French word “pensée” meaning “thought”. This name was chosen as the flower was often used as a symbol of remembrance.

A motet is a simple musical composition based on a sacred text, usually sung without an accompaniment. The term “motet” is a diminutive form of “mot”, the French for “word”.

62. The first one begins “Blessed is the one who does not walk in step with the wicked” : PSALM

Alexander Pope’s 1709 poem “An Essay on Criticism” is the source of at least three well-known quotations:

67. Like almost every major character on “The Big Bang Theory” : NERDY

According to the University of Baghdad, the name “Baghdad” dates way back, to the 18th-century BCE (yes, BCE!). The name can be translated into English from the language of ancient Babylon as “old garden” (bagh) and “beloved” (dad).

Here in the US, a ton is equivalent to 2,000 pounds. Over in the UK, a ton is 2,240 pounds. The UK unit is sometimes referred to as an Imperial ton or sometimes a “long ton”. Folks over there refer to the US ton then as a “short ton”. To further complicate matters, there is also a “metric ton” or “tonne”, which is equivalent to 2,204 pounds. Personally, I wish we’d just stick to kilograms …

There appears to be a lot of speculation about the origin of the magician’s phrase “hocus pocus”, but nothing stands out to me as being very definitive.

Kevin Costner attributes some of his motivation to pursue an acting career to the great Welsh actor, Richard Burton. Back when Costner was taking acting classes, and was undecided about whether to continue chasing his dream, he ran into Burton on a flight from Puerto Vallarta. Burton agreed to chat with him for a little while, and so Costner was able to ask him if acting meant tolerating the kind of personal drama that had plagued Burton’s own life. Burton told him, “You have green eyes. I have green eyes. I think you’ll be fine”.

Andy Murray is a tennis player from Scotland who became British number in 2006, rising to world number one in 2016. Much to the delight of the locals, Murray won the Wimbledon Championship in 2013, making him the first British male player to win in 77 years. Murray also won Olympic gold in the 2012 Summer Olympics in London, and again in the Rio Games in 2016.

The Ukrainian-born comedian Yakov Pokhis is better known by his stage name, Yakov Smirnoff. Smirnoff was popular on television in the eighties, playing comedic roles with a thick Russian accent. He is a smart cookie, and holds a master’s degree in positive psychology from the University of Pennsylvania.

39. Good “Wheel of Fortune” purchase for the answer PANAMA CANAL : AN A

43. Character on a collectible card : POKEMON

“Pokémon GO!” is a reality-based video game in which players must locate, capture, battle and train virtual creatures known as Pokémon. The Pokémon are hidden in the real world, in the sense that they have to be located on an electronic device (like a smartphone) in “the real world”, for which a GPS location is needed. Players see the Pokémon overlaid on a view of the real world on their smart device.

John Le Carré is the pen name of David Cornwell, an English author famous for his spy novels. Cornwell worked for British Intelligence during the fifties and sixties, even as he was writing his spy thrillers. He left MI6 soon after his most famous 1963 novel “The Spy Who Came in from the Cold”, became such a great success.

A labyrinth is a maze, and is named after the maze in which the Minotaur was confined in Greek mythology.

Christian Dior was a French fashion designer. As WWII approached, Dior was called up by the French military, drawing a temporary halt to his career in fashion. He left the army in 1942 and for the duration of the war designed clothes for wives of Nazi officers and French collaborators. After the war his designs became so popular that he helped reestablish Paris as the fashion center of the world.

9. Sight on the coast of Norway : FJORD

19. Animal that frolics in streams : OTTER

62. The first one begins “Blessed is the one who does not walk in step with the wicked” : PSALM

67. Like almost every major character on “The Big Bang Theory” : NERDY

4. Long inhaling of a cigarette : DRAG

30. Object made obsolescent by streaming : DVD

39. Good “Wheel of Fortune” purchase for the answer PANAMA CANAL : AN A

40. Vehicle for a painter or plumber : VAN

43. Character on a collectible card : POKEMON

59. Something that might be picked up at the beach : TAN