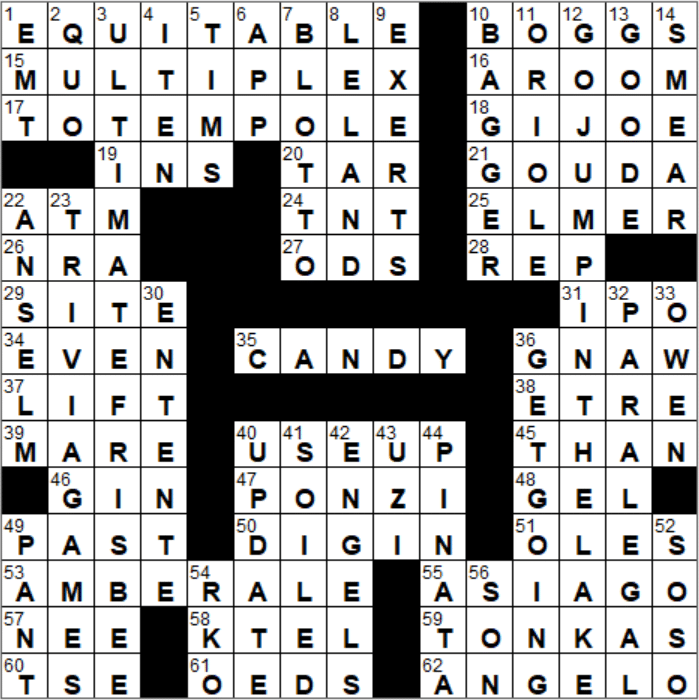 We have a note with today’s puzzle:

Two letters of the alphabet are missing from the main, connected portion of the completed grid. What are they? The answer goes, appropriately, at 35-Across.

The answer at 35-across is CANDY, which sits inside a PINATA depicted by the black squares at the center of the grid. CANDY can be rewritten as “C AND Y”, telling us that the letters C and Y don’t appear at all in the rest of the grid:

The Regal Entertainment Group chain of theaters is headquartered in Knoxville, Tennessee.

“Totem” is the name given to any entity that watches over a group of people. As such, totems are usually the subjects of worship. Totem poles are really misnamed, as they are not intended to represent figures to be worshiped, but rather are heraldic in nature often celebrating the legends or notable events in the history of a tribe.

Gouda is a cheese that originated in the Dutch city of the same name, although today Gouda is produced all over the world and very little of it comes from the Netherlands. Gouda is often smoke-cured, given it a yellowish-brown outer skin and that characteristic smoky taste.

Elmer Fudd is one of the most famous of all the Looney Tunes cartoon characters, the hapless nemesis of Bugs Bunny. If you have never seen it, check out Elmer and Bugs in the marvelous “Rabbit of Seville”, a short cartoon that parodies Rossini’s “Barber of Seville”. Wonderful stuff …

27. Consumes too much, informally : ODS

Elevators are known as “lifts” in England.

39. No Triple Crown winner ever : MARE

The US Triple Crown horse races are, in order through the year:

Charles Ponzi was born in Luigi, Italy in 1882 and arrived in the US in 1903, flat broke having gambled away all his money on the voyage to Boston. Ponzi devised a scheme to buy what were known as “international reply coupons” through friends in Italy, which he had sent to him in the US so that he could redeem them on this side of the Atlantic. As the value in the US was greater than that in Italy, he could make a handsome profit. This was in itself an “illegal” transaction, buying an asset in one market at a low price, then immediately selling it in another market at a higher price. But it’s what he did next that became known as a Ponzi Scheme. He couldn’t redeem his coupons quickly enough due to red tape so he approached other investors, initially friends, and had them give him cash so that he could buy more coupons in Italy. He promised the investors he would double their money, which they did initially. Many people wanted to get in on the scheme seeing that Ponzi was able to make the new investors a profit and double the money of the original investors. Eventually, somebody did the math and word started to get out that the investment was risky, so the number of new investors started to fall. Without sufficient new investors Ponzi couldn’t double the money of his latest investors, and the whole scheme unraveled.

Asiago is a crumbly cheese that is named for the region in northeastern Italy from where it originates.

When President Donald Trump took office, his wife Melania Trump was the first naturalized US citizen to become First Lady of the US. President Trump’s wife was born Melanija Knavs (often Germanized to “Melania Knauss”) in the city of Novo Mesto in Slovenia, which was then part of former Yugoslavia. But, Melania Trump isn’t the first First Lady born overseas. That honor goes to London-born Louisa Adams, the wife of President John Adams.

I know that a lot of people detested the “Hooked on Classics” albums, but to be honest, I found them to be a lot of fun. But then again, I like disco! The original “Hooked on Classics” album was recorded in 1981 by the Royal Philharmonic Orchestra from London. The music was a selection of recognizable extracts from the world of classical music played over a continuous, disco beat.

San Angelo is a city in West Central Texas.

A defibrillator (defib) might be operated by an Emergency Medical Technician (EMT).

Ultimate is a team sport, similar to football or rugby in that the goal is to get a flying disc into an endzone or goal area. The sport used to be called “Ultimate Frisbee”, but the “Frisbee” was dropped as it is a registered trademark.

I-10 is the most southerly of the interstate routes that cross from the Atlantic right to the Pacific. I-10 stretches from Santa Monica, California to Jacksonville, Florida. Various stretches of the route have been given different names, for example, the Rosa Parks Freeway, the Santa Monica Freeway, the San Bernardino Freeway and the Christopher Columbus Transcontinental Highway.

Leland Stanford became a very successful businessman in California after moving there from New York during the Gold Rush. Stanford then served as governor of the state for two years, and later US Senator for California. He founded the Leland Stanford Junior University in memory of his teenage son who died of typhoid fever while the family was travelling in Italy in 1884. The university opened its doors for business in 1891, and the first student admitted was none other than Herbert Hoover, the man would become the 31st President of the US.

11. Brooks Robinson was one : ORIOLE

Brooks Robinson played baseball for the Baltimore Orioles for the whole of his MLB career, from 1955 to 1977. Many believe that Robinson was the great defensive third baseman to play the game. He was given the nickname “The Human Vacuum Cleaner” for his ability to “suck up” ground balls.

“Johnny B. Goode” is a rock and roll number that was made famous by Chuck Berry in the late fifties. “Johnny B. Goode” even made it into outer space as it was chosen as one of four American songs that were included on the Voyager Golden Record, which was attached to the Voyager spacecraft that left our solar system in 2012.

A paralegal (sometimes just “para”) is someone who is trained in legal matters sufficiently to assist a lawyer. A paralegal cannot engage in the practice of law and must be supervised by a qualified lawyer.

Friedrich Engels was a German political theorist who worked closely with Karl Marx to develop what became known as Marxist Theory. Along with Marx, he also co-authored “The Communist Manifesto” in 1848, and later he supported Marx as he worked to publish “Das Kapital”.

44. Party item depicted in the middle of this puzzle’s grid : PINATA

… because only male offspring could succeed to the throne.