Constructed by: Mark MacLachlan
Edited by: Will Shortz 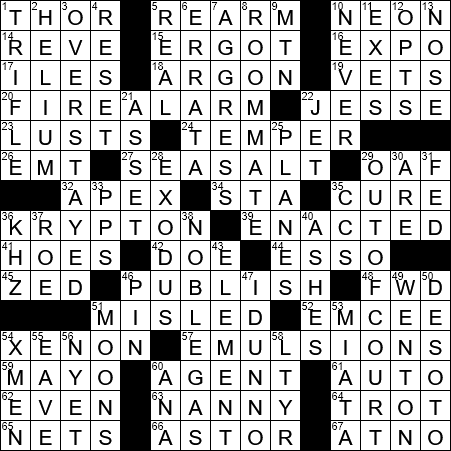 Each of today’s themed answers is an ELEMENT, a NOBLE GAS with the AT. NO. given by the corresponding clue number:

Ragnarök is the name given to a set of events in Norse mythology that resulted in the deaths of many famous gods, including Odin and Thor.

Ergot is a fungus, or actually a group of fungi, that cause disease in rye and related plants. If human eat ergot-contaminated grain, a condition called ergotism can result. Ergotism is the result of consumption of alkaloids produced by the fungi, alkaloids that can cause seizures and manic behavior. It has even been suggested that the hysteria exhibited by the Salem “witches” was perhaps caused by the ingestion of ergot-contaminated rye.

22. Ventura who was governor of Minnesota : JESSE

The first use of a national emergency phone number was in the UK in 1937, where the number 999 was introduced to call emergency services. If you need emergency services in the UK or Ireland to this day, you have to dial 999. It’s not really clear why 911 became the emergency number in the US. The most credible suggestion (to me) is that when it was introduced by the FCC in 1967, it was a number that “fit” with the numbers already used by AT&T for free services (211-long distance; 411-information; 611-repair service).

45. End of the British alphabet : ZED

The phrase “publish or perish” is commonly used in the world of academia to describe the pressure to continually produce academic papers in order to further one’s career. The phrase probably dates back to the 1920s.

57. Opaque liquids such as milk : EMULSIONS

An emulsion is a mixture of two liquids, two liquids that don’t easily mix. Examples are milk (water and fat), mayonnaise (oil and water) and vinaigrette (oil and vinegar). Mixture of such liquids requires the presence of an emulsifier, a substance that stabilizes the emulsion so that separation does not occur. Examples of emulsifiers are egg yolk and mustard.

Turkey trots are long-distance fun runs held around Thanksgiving here in the US, and around Christmas over the UK. The “turkey” reference is to the traditional dish served at both holidays.

John Jacob Astor was the patriarch of the famous American Astor dynasty. He was the country’s first multi-millionaire, making his fortune in the trade of fur, real estate and opium. In today’s terms, it has been calculated that by the time of his death he has accumulated a fortune big enough to make him the fourth wealthiest man in American history (in the company of the likes of Andrew Carnegie, Cornelius Vanderbilt, Bill Gates, Henry Ford and John D. Rockefeller).

Denali means “the high one” in the native Athabaskan language, and is now the name used for Mount McKinley. Denali’s summit stands at 20,237 feet, making it the highest mountain peak in North America. I was surprised to learn that there is a Denali State Park, as well as the Denali National Park. The two are located adjacent to each other (which makes sense!). The State Park is undeveloped for all practical purposes, with just a few campgrounds and trailheads.

28. Book that describes the crossing of the Red Sea : EXODUS

35. Includes when sending an email : CCS

I wonder do the kids of today know that “cc” stands for carbon copy, and do they have any idea what a carbon copy was? Do you remember how messy carbon paper was to handle?

38. The answer to each clue with an arrow : NOBLE GAS

The rare gases are better known as the noble gases, but neither term is really very accurate. Noble gas might be a better choice though, as they are all relatively nonreactive. But rare they are not. Argon, for example, is a major constituent (1%) of the air that we breathe.

Hernando de Soto was a Spanish conquistador who led expeditions throughout the southeastern US. De Soto’s travels were unsuccessful in that he failed to bring gold or silver back to Spain, and nor did he found any colonies. What de Soto did achieve was the exposure of local populations to devastating Eurasian diseases. De Soto was the first European to cross the Mississippi River, in 1541. The first European to see the Mississippi (but not cross it) was Alonso Álvarez de Pineda, in 1519.

X-Men is a team of superheroes created by Stan Lee for Marvel Comics. Nowadays the X-Men are perhaps best known as the subject of a series of movies, with Hugh Jackman playing Wolverine, and Patrick Stewart playing Professor Xavier (or simply “Professor X”). Some very respected actors have also played the villains that X-Men have to battle. For example, the enemy called Magneto is portrayed by veteran Shakespearean actor Sir Ian McKellan.

I was lucky enough to visit the Moscow Kremlin as a tourist a few decades ago. The Kremlin sits right on Red Square, along with Saint Basil’s Cathedral and the famed GUM department store. “Kremlin” is a Russian word for “fortress”.