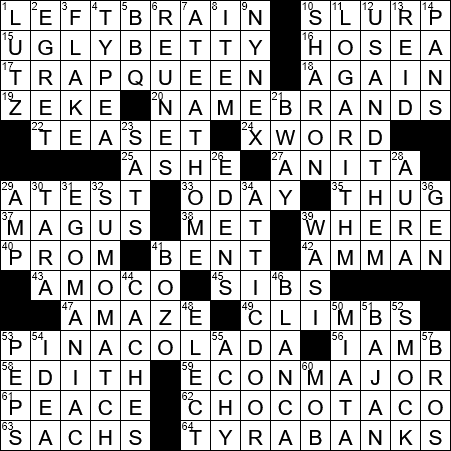 15. Hit TV series based on a Colombian telenovela : UGLY BETTY

16. Source of the line “They have sown the wind, and they shall reap the whirlwind” : HOSEA

Anita O’Day was the stage name of the jazz singer Anita Colton. She chose the name as “O’Day” is Pig Latin for “dough”, a slang term for “money”. O’Day had problems with heroin and alcohol addiction leading to erratic behavior, and earning her the nickname “The Jezebel of Jazz”.

The handheld weapon known as a garrote (or garotte) was in particular used by murderers and robbers harassing travelers in India. These felons were known locally as “thuggees” (from the Hindi word for “thief”). This gave us our contemporary word “thug”, meaning a brute.

Amman is the capital city of Jordan, and is one of the oldest continuously-inhabited cities in the world. Amman has been occupied by a number of different civilizations over the centuries, including the Greeks who called it “Philadelphia”, a name retained by the Romans when they occupied the city just after 100 AD.

“Piña colada” is a Spanish term which translates into “strained pineapple”. The Piña colada cocktail was introduced in the Caribe Hilton San Juan in 1954, and since 1978 it has been the official beverage of Puerto Rico. Yum …

Edith Wilson was the second wife of President Woodrow Wilson. There is little doubt that Mrs. Wilson acted as Chief of Staff for her husband, and some say actually ran the country, for some time after he suffered a stroke in 1919. She strongly opposed the notion that Vice President Riley Marshall should assume the powers of president, and so stepped in herself. Mrs Wilson retired with her husband in 1921 when he left office, and she nursed him until his death in 1924. Edith Wilson is sometimes referred to as the “first female president of the US”. Since 1965, the issue no longer exists, as the Twenty-fifth Amendment to the Constitution was enacted, providing direction on procedure should the President become incapacitated.

59. Many a B-school applicant : ECON MAJOR

4. Ambitious and high-energy : TYPE A

The telecommunications company that we know today as Verizon was founded in 1983 as Bell Atlantic, and was one of the “Baby Bells” that were formed after the breakup of AT&T. Bell Atlantic merged with fellow Baby Bell NYNEX in 1997, and then merged with GTE in 2000 to form Verizon. The new company name is a portmanteau of “veritas” (“truth” in Latin) and “horizon”.

12. Longest song on Pink Floyd’s “The Dark Side of the Moon” : US AND THEM

Pink Floyd was an English rock band founded in 1965. The band’s most famous albums are probably “The Dark Side of the Moon” and “The Wall”.

Scarlett O’Hara’s home is the Tara plantation, in Margaret Mitchell’s “Gone with the Wind”. Tara was founded not far from the Georgia city of Jonesboro by Scarlett’s father, Irish immigrant Gerald O’Hara. Gerald won the square mile of land on which Tara was built in an all-night poker game. He named his new abode after the Hill of Tara back in his home country, the ancient seat of the High King of Ireland. Rhett’s rival for the affections of Scarlet is Ashley Wilkes who lives at the nearby Twelve Oaks plantation.

31. Emperor Nero, by all accounts : EGOMANIAC

The Warner Bros. film studio was founded by four Warner brothers, although their original family name was Wonskolaser. The older brothers emigrated from Poland as children with their parents, and changed their name when they landed in Baltimore, Maryland in 1889.