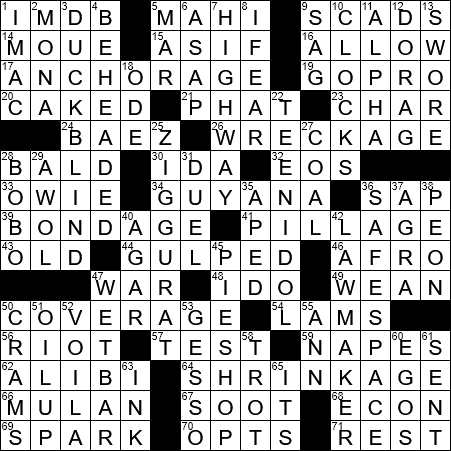 At first sight, each of today’s themed answers is a common word ending in -AGE. However, each has been clued so that answer is in the form “word” AGE, giving us a “punny period”:

5. When doubled, a Hawaiian fish : MAHI

24. Joan who sang at Woodstock : BAEZ

Boise, Idaho is the largest metropolitan area in the state by far. There are a number of stories pertaining to the etymology of the name “Boise”. One is that French trappers named the tree-lined river that ran through the area “la rivière boisée”, meaning “the wooded river”.

Guyana’s official name today is the Co-Operative Republic of Guyana. Guyana is located on the northern coast of South America. The country used to be a British colony, with the name British Guyana, but it achieve independence in 1966. It is now the only member of the British Commonwealth (now called the Commonwealth of Nations) that is on mainland South America.

The sugar maple is the state tree of New York, Vermont, West Virginia and Wisconsin. It is also the primary source of maple syrup.

“Pill” is the name given to small, ball-like fuzz found on woollen garments. The term comes from the Latin “pilula” meaning “little ball”, which also gives us the word “pill” that is used for a tablet of medicine.

War is a simple card game, one mainly played by young children.

“Mona Lisa” is a marvelous 1950 song that topped the charts for Nat King Cole for eight weeks. The song was written for the film “Captain Carey, U.S.A.” that was released that same year, starring Alan Ladd. “Mona Lisa” won the Oscar for Best Original Song.

Back in the 15th century, a turnpike was a defensive barrier across a road. By the 17th century the term was used for a barrier that stopped travelers until a toll was paid. By the 18th century a turnpike was the name given to a road with a toll.

Hip-hoppers might wear do-rags today, but they have been around for centuries. If you recall the famous image known today as “Rosie the Riveter”, she is wearing a do-rag. The etymology is pretty evident, a piece of cloth (rag) to hold a hairstyle (do) in place.

Elvis Presley was born in Tupelo, Mississippi and moved to Memphis, Tennessee with his family when he was 13-years-old. Once he had achieved fame, Elvis purchased Graceland, the famous Memphis home that he used for himself and his family. I visited Graceland some years ago, and thoroughly enjoyed the experience.

Ziggurats were massive, terraced, step pyramids built in the ancient Mesopotamian valley. The ziggurat-style of architecture has been used in modern buildings, with notable examples being the US Bullion Depository in Fort Knox, and the MI6 Building in London.

Alexander Hamilton was one of America’s Founding Fathers, chief of staff to General George Washington and the first Secretary of the Treasury. It was Hamilton who founded the nation’s first political party, the Federalist Party. He is also famous for fighting a duel with Vice President Aaron Burr, which resulted in Hamilton’s death a few days later.