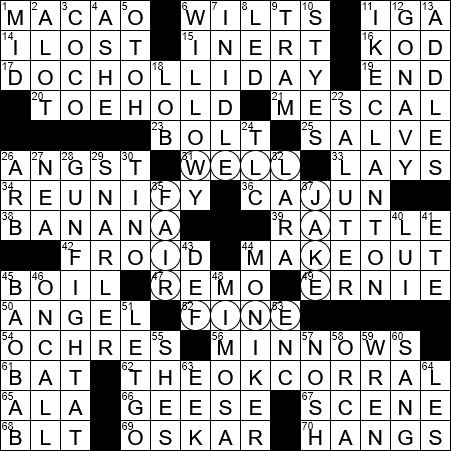 We have several references to a famous GUNFIGHT that took place AT THE OK CORRAL:

There are also four answers CORRALLED, forming a circle, at the center of the grid. Each is a synonym of “OK”:

“IGA” stands for Independent Grocers Alliance, a chain of supermarkets that extends right around the world. IGA’s headquarters is in Chicago. The company uses the slogan “Hometown Proud Supermarkets”.

The famous gunslinger Doc Holliday was from Georgia, and received the degree of Doctor of Dental Surgery in Philadelphia. Holliday moved to the Southwest after he contracted tuberculosis, in the hope that the climate might be good for his health. He first settled in Dallas, where he soon discovered that he could make a better living gambling than by running a dental practice. It was while gambling in saloons that Holliday got involved in gunfights and built a reputation as a gunslinger. The most famous shootout in which he was involved was the Gunfight at the OK Corral in Tombstone, Arizona when he fought alongside the Earp brothers. Holliday survived his many gunfights, but eventually succumbed to the disease in his lungs. He died in Glenwood Springs, Colorado at the age of 36.

The peyote is a small spineless cactus that is native to southwestern Texas and Mexico. When ingested, the peyote is known to have a psychoactive effect. One of the psychoactive alkaloids in peyote is mescaline, a drug of choice for the likes Aldous Huxley and Pablo Picasso.

Usain Bolt is a Jamaican sprinter who won the 100m and 200m race gold medals in both the 2008 and 2012 Olympic Games. Back in Jamaica, Bolt was really into cricket and probably would have been a very successful fast bowler had he not hit the track instead.

The term “Banana Republic” is used to describe a politically unstable country.

First baseman Ernie Banks was known as “Mr. Cub”, and played his entire 19-year professional career with the Chicago Cubs. The Cubs retired Banks’ uniform number 14 in 1982, making him the first Cubs player to be so honored. Banks was known for his catchphrase, “It’s a beautiful day for a ballgame … Let’s play two!”, a reference to his love of the game, always wanting to play a doubleheader.

Broadway angels are people who invest money in Broadway shows.

Oskar Schindler is the protagonist in the Steven Spielberg movie “Schindler’s List”. Schindler was a real person who survived WWII. During the Holocaust, Schindler managed to save almost 1,200 Jews from perishing by employing them in his factories. After the war, Schindler and his wife were left penniless having used his assets to protect and feed his workers. For years the couple survived on the charity of Jewish groups. Schindler tried to make a go of it in business again but never had any real success. He died a pauper in 1974 in Hildesheim, not far from Hanover. His last wish was to be buried in Jerusalem. Schindler was the only former member of the Nazi Party to be buried on Mount Zion.

Coco Chanel was a French fashion designer. Perhaps because I am a man, clothes design is not my forte. However, if I had to pick a designer whose clothes I really liked, it would be Chanel. She had a way of creating simpler designs that look so elegant on a woman.

Ike and Billy Clanton participated in what has to be the most famous gunfight in the history of the Old West, the Gunfight at the O.K. Corral that took place in Tombstone, Arizona. Strangely enough, the fight didn’t happen at the O.K. Corral, but took place six doors down the street in a vacant lot next to a photography studio.

“Arb” is short for “arbitrageur”. That’s someone one who profits from the purchase of securities in one market and the subsequent sale in another by taking advantage of price discrepancies across markets.

“Baobab” is the common name for an Adansonia tree, most species of which are native to Madagascar. The name Adansonia was given in honor of the French naturalist and explorer Michel Adanson.

“Sang-froid” is coolness, composure. The term is French for “cool blood”.