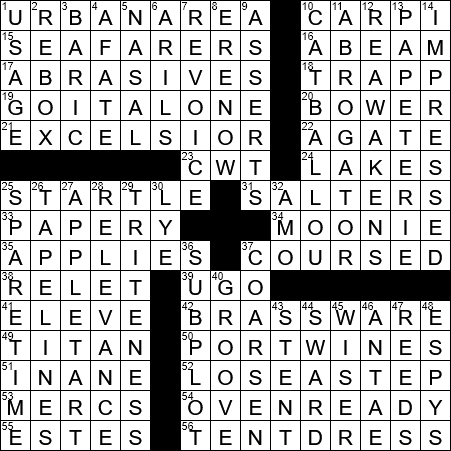 The Vikings were a Germanic people from northern Europe who were noted as great seafarers. Key to the success of the Vikings was the design of their famous “longships”. Made from wood, the longship was long and narrow with a shallow hull, It was also light, so that the crew would actually carry it small distances over land and around obstacles. Longships were designed to be propelled both by sail and by oars.

The beam is the widest part of a nautical vessel. Something pointed out as lying abeam is something that it is 90 degrees from a line through the bow and the stern, in other words directly off to the right or the left.

An unofficial nickname for the state of Minnesota is “Land of 10,000 Lakes”. That nickname is quite apt as the state is home to almost twelve thousand lakes that are at least ten acres in size.

The musical “La Cage aux Folles” opened on Broadway in 1985. It is a musical adaptation of the French play of the same name by Jean Poiret that was first staged in 1973. I’ve never had the pleasure of seeing the stage play nor the musical, but I love the wonderful movie adaptation called “The Birdcage”, which was released in 1996. The film has a very strong cast that includes Robin Williams, Nathan Lane, Gene Hackman and Hank Azaria.

The Mercury brand of car was made by Ford from 1938 until 2011. Mercury was introduced by Henry Ford’s son Edsel Ford. Mercury vehicles were positioned as being more luxurious that the regular Ford models, and more economical than Ford’s high-end Lincoln models.

Estes Kefauver was a Democratic politician from Tennessee. In 1956 Kefauver was the running mate of Adlai Stevenson when Stevenson made a bid for the presidency. The pair lost to the Eisenhower-Nixon ticket.

Barium is the chemical element with the atomic number 56, and the element symbol “Ba”.

The casing surrounding many seeds is called the aril, and it may be quite fleshy. This fruit-like characteristic makes it desirable as a food and aids in the dispersion of the seeds.

“Cat Ballou” is a 1965 film, a comedy western starring Jane Fonda in the title role and Lee Marvin in dual roles, for which Marvin won his only Oscar. The movie is based on a novel of the same name by Roy Chanslor. The novel was a serious and a quite dark work, but it was lightened up for the big screen.

I’ve always thought that Lee Marvin was a very talented actor. Marvin had an amazing voice, and the appearance of a man who was hard and villainous. Yet he was able to break free from the villain roles in which he was typecast and played some characters with more depth. He won an Academy Award for his dual-role performance in 1965’s “Cat Ballou”. His totally unique rendition of the song “Wand’rin Star” from the 1969 musical film “Paint Your Wagon” made it to number one in the UK charts, keeping the Beatles hit “Let it Be” in the number two spot. I’ll bet that surprised even Marvin himself!

11. Official with the power to annul laws : ABROGATOR

“To abrogate” is such a lovely sounding verb, I think. It means to annul or do away with, especially by using authority.

Soda lye is a solution of sodium hydroxide. One common use of soda lye is in the manufacture of soap.

43. It can get the blood flowing : STENT

In the world of medicine and surgery, a stent is an artificial tube inserted inside a vessel in the body, say an artery, so that it reduces the effects of a local restriction in the body’s conduit.

“Sward” is version of the word “swarth”, and describes a grassy piece of land.

An anta (plural “antae”) is a post or pillar on either side of the entrance to a Greek temple.

48. Awards for Best Play and others : ESPYS