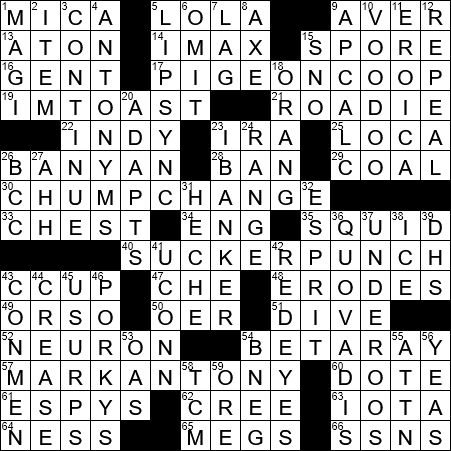 Each of today’s themed answers starts with a slang term for someone who might be targeted by a CON MAN:

Mica is a mineral, a sheet silicate. Thin sheets of mica are transparent and are used in place of glass in certain applications. This form of mica is called isinglass, and as it has a better thermal performance than glass it is a great choice for “peepholes’ in boilers and lanterns. Mica is also used in the electronics industry, making use of its unique electrical and thermal insulating properties.

17. Base for long-distance carriers? : PIGEON COOP

A roadie is someone who loads, unloads and sets up equipment for musicians on tour, on the road.

Ira Gershwin was the lyricist who worked with his brother George to create such American classics as the songs “I Got Rhythm” and “Someone to Watch Over Me”, as well as the opera “Porgy and Bess”. After George Gershwin died, Ira continued to create great music, working with the likes of Jerome Kern and Kurt Weill.

“Livin’ la Vida Loca” is a 1999 single recorded by Ricky Martin, the title of which translates as “living the crazy life”.

The banyan is a fig and germinates in cracks and crevices of a host tree and then sends roots down towards the ground. The roots that head down the the host give rise to a familiar name for the banyan, namely the strangler fig. The banyan tree is the national tree of India.

A pittance is a small amount, often a living allowance or remuneration. The term came into English from Old French, and is basically an amount given out of “pity”.

Octopodes and squid have the ability to release a dark pigment into the water as a means of escape. The dark pigment is called cephalopod ink (the squid and octopus belong to the class cephalopoda). The dark color is created by melanin, the same substance that acts as a pigment in human skin.

“Lingerie” is a French term, but as used in France it just means any underwear, worn by either males or females. In English we use “lingerie” to describe alluring underclothing worn by women. The term “lingerie” comes into English via the French word “linge” meaning “washables”, and ultimately from the Latin “linum”, meaning “linen”. We tend not to pronounce the word correctly in English, either here in the US or across the other side of the Atlantic. The French pronunciation is more like “lan-zher-ee”, as opposed to “lon-zher-ay” (American) and “lon-zher-ee” (British).

“Guerrillero Heroico” is the name of an iconic photograph taken Alberto Korda of the revolutionary Che Guevara. With the title translating into English as “Heroic Guerrilla Fighter”, the image shows Guevara in a dark beret, with an “implacable” stare. It is versions of this photo that have been used so many time in tattoos, poster, paintings, etc. The Victoria and Albert Museum in London has determined that “Guerrillero Heroico” has been reproduced more than any other image in the history of photography.

The words “o’er the land of the free” come from “The Star-Spangled Banner” written by Francis Scott Key.

52. Cell that fires on impulse : NEURON

The Cree are one of the largest groups of Native Americans on the continent. In the US most of the Cree nation live in Montana on a reservation shared with the Ojibwe people. In Canada most of the Cree live in Manitoba.

Orangutans (also “orangs”) are arboreal creatures, in fact the largest arboreal animals known to man. They are native to Indonesia and Malaysia, living in the rain forests. Like most species in rain forests these days, orangutans are endangered, with only two species surviving. The word “orangutan” is Malay, meaning “man of the forest”.

My favorite movie starring the actress Anne Heche is “Six Days Seven Nights”, a romantic comedy in which she plays opposite Harrison Ford. Heche is noted for her difficult private life. She wrote that her father had molested her as a child and gave her a sexually transmitted disease (he later revealed that he was homosexual, and died of AIDS). Heche dated comedian Steve Martin for two years, and then lived with comedian Ellen DeGeneres for three. Soon after breaking up with DeGeneres, she started exhibiting eccentric behavior for a while, claiming that she was the daughter of God, and that she would take everyone back to heaven in her spaceship. Happily, I think things have calmed down for her in recent years.

The 1997 movie “Donnie Brasco” is about an FBI agent who infiltrates a New York City crime family. The film is loosely based on the true story of agent Joseph Pistone who worked his way into the Bonanno family. Johnny Depp plays Pistone on screen, and uses the name Donnie Brasco when undercover.

“Esprit de corps” is the morale of a group, best translated from French perhaps as “team spirit”.

“Quo Vadis” is an epic drama made in 1951, an adaptation of the 1896 novel of the same name written by Henryk Sienkiewicz. At the top of the bill are Robert Taylor and Deborah Kerr, with Peter Ustinov playing the Emperor Nero. There was also an uncredited extra making her first appearance on the screen, a young lady by the name of Sophia Loren.

In baseball, designated hitters (DHs) may replace the pitcher (P) at bat.

The University of Connecticut (UConn) was founded in 1881 as the Storrs Agricultural School, taking its name from the Storrs brothers who donated the land and provided initial funding.

The Organization of American States (OAS) has its headquarters in Washington, D.C. Not all of the independent states in the Americas are members. Cuba was barred from participation in the organization after a vote in 196. Honduras had her membership suspended after the country’s 2009 coup.

Turner Classic Movies (TCM) is one of my favorite television channels, delivering just what its name promises: classic movies.