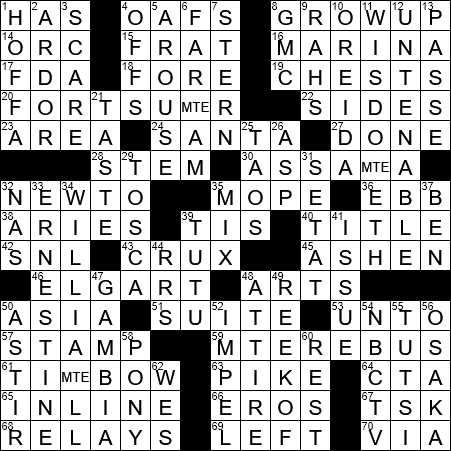 We have a rebus puzzle today. In fact, it is as “MTE REBUS”, as revealed by rewriting the answer “MT EREBUS”:

8. Response to a sophomoric joke : GROW UP

Emily Dickinson wrote nearly 1800 poems in her lifetime, with less than a dozen published before she died in 1886. Emily’s younger sister discovered the enormous collection, and it was published in batches over the coming decades. Try this one for size:

Like so many of the great composers, the extent of Bach’s contribution to the repertoire wasn’t fully recognized until long after his passing. I think that Johann Sebastian Bach was the greatest composer of the Baroque period, and is ranked by many as the greatest classical composer of all time.

59. Southernmost active volcano in the world … or a cryptic hint to certain squares in this puzzle : MT EREBUS (or “MTE rebus”)

Mount Erebus is a volcano that is located on Ross Island in Antarctica. Erebus is the second-highest on the continent, after Mount Sidley. It was discovered in 1841 by Sir James Clark Ross, along with the companion volcano Mount Terror. Ross named the peaks for the ships used on his voyage: HMS Erebus and HMS Terror.

Tim Tebow is a former quarterback who played mainly for the Denver Broncos and New York Jets. Tebow’s relatively short professional career followed a very successful college career during which he became the first sophomore to win the Heisman Trophy.

1. Labor leader played by Jack Nicholson in a 1992 biopic : HOFFA

Jimmy Hoffa headed off to meet with two Mafia leaders at a restaurant in a suburb of Detroit on July 30, 1975. The two men he was supposed to meet denied any appointment was made, and they were seen in public in other locations far from the restaurant. Hoffa was spotted by passers-by in the restaurant parking lot, the last time he was ever seen. His wife reported him missing later that night, and the resulting police investigation failed to find Hoffa or his body. Hoffa was declared legally dead in 1982, seven years after he disappeared.

GMC is a division of General Motors (GM) established in 1901 that started out as “GMC Truck”.

Wisdom teeth are an extra set of molars in the back of the jaws. There are usually four wisdom teeth, and they only occur in about 65% of the population.

“Passé” is a French word, meaning “past, faded”.

Rapper Nas used to go by another stage name, Nasty Nas, and before that by his real name, Nasir bin Olu Dara Jones. Nas released his first album “Illmatic” in 1994, and inventively titled his fifth studio album “Stillmatic”, released in 2001. Not my cup of tea, I would say …

Lily Tomlin is a comedian and actress who got her big break as a regular member of the cast of “Rowan & Martin’s Laugh-In” in the late sixties and early seventies. Tomlin created several great characters on the show. My personal favorite is Ernestine, the condescending telephone operator with the marvelous nasal voice and snorting laugh. Ernestine was fond of saying “One ringy dingy …” I really enjoy Tomlin’s performances as an actress, notably in the movies “9 to 5” and “All of Me”, and on the TV shows “The West Wing” and “Grace and Frankie”. I went to her stage show many years ago in San Francisco, and just did not enjoy it. I was devastated …

Big Ben is the name commonly used for the large bell in the Clock Tower of the Palace of Westminster (aka the Houses of Parliament). Big Ben’s official name is the Great Bell, and there is some debate about the origins of the nickname. It may be named after Sir Benjamin Hall who oversaw the bell’s installation, or perhaps the English heavyweight champion of the day Benjamin Caunt.

44. Norfolk Southern and others: Abbr. : RRS

47. Its capital is an Atlantic port : GAMBIA

Banjul is the capital city of the Gambia, and is located on an island in the Gambia River where it enters the Atlantic Ocean.