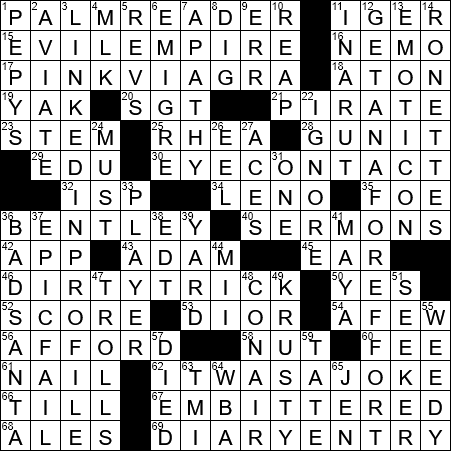 “Pink Viagra” is a name commonly used for the drug flibanserin, which is sold as Addyi. Pink Viagra is prescribed to some pre-menopausal women with hypoactive sexual desire disorder.

The first traffic lights date back to 1868 when they were installed outside the Houses of Parliament in London. They resembled the signals already in use for trains, with semaphore arms and red and green gas lamps for nighttime use. That first system was operated manually, by a policeman at the base. Sadly, one police officer was killed, just one year after the light’s installation, when the gas system exploded.

Jay Leno was born James Leno in New Rochelle, New York. Jay’s father was the son of Italian immigrants, and his mother was from Scotland. Leno grew up in Andover, Massachusetts and actually dropped out of school on the advice of a high school guidance counsellor. However, years later he went to Emerson college and earned a Bachelor’s degree in speech therapy. Leno also started a comedy club at Emerson in 1973. Today Jay Leno is a car nut and owns about 200 vehicles of various types. You can check them out on his website: www.jaylenosgarage.com.

The Bentley is a luxury car that is built in the UK. Bentley Motors was founded in 1919 by W. O. Bentley, and taken over by Rolls Royce in 1931. The company has been owned by Volkswagen since 1998.

The handle of a jug might be referred to as its ear.

Christian Dior was a French fashion designer. As WWII approached, Dior was called up by the French military, drawing a temporary halt to his career in fashion. He left the army in 1942 and for the duration of the war designed clothes for wives of Nazi officers and French collaborators. After the war his designs became so popular that he helped reestablish Paris as the fashion center of the world.

Samuel Pepys was a British Member of Parliament and naval administrator, more famous these days for his diary than for his contribution to political history. Pepys started to keep a diary on New Year’s Day in 1660 and recorded his daily life for almost ten years. His writings include details of his personal life as well as firsthand accounts of the important events of the 1660s such as the Great Plague of 1665 and the Great Fire of London in 1666.

12. Have one’s hard work recognized : GET AN A FOR EFFORT

Apparently the phrase “E for effort” originated as a WWII campaign in the US to help boost productivity in factories. Over time, the phrase has been misconstrued as “A for Effort”, apparently assuming that we’re talking about grades.

13. Something that’s had its head turned? : EMOTICON

An emoticon is a glyph created using text characters to represent facial features, and usually oriented sideways. The emoticon is designed to indicate emotion or attitude. The classic example is the smiley face ?

The Ronettes were a sixties girl group from New York City who worked with famed record producer Phil Spector. Their most famous hit was probably “Be My Baby” from 1963. The lead singer of the group was Veronica Bennett, who ended up marrying Spector in 1968, leaving him in 1974 to become “Ronnie” Spector, “the original bad girl of rock and roll”.

Something described as “musty” has as stale or moldy odor. The term derives from an obsolete word “moisty”, as in “moist”.

“Unagi” is the Japanese name for freshwater eel, and “anago” is the name for saltwater eel.

“Bad Santa” is a black comedy, not one I really enjoyed, starring Billy Bob Thornton as the not-so-nice Santa Claus. If you want to see an unrated version of the film, you can just buy the DVD and watch the special feature called “Badder Santa”.

41. People encountered by the conquistadors : MAYA

“Conquistador” is the Spanish for “conqueror”.

In Internet terms, a troll is someone who attempts to disrupt online group activities. The fishing term “troll” is used to describe such a person, as he or she throws out off-topic remarks in an attempt to “lure” others into some emotional response. Sad, sad people …

63. Letters for the detail-averse : TMI

TMI (too much information!)