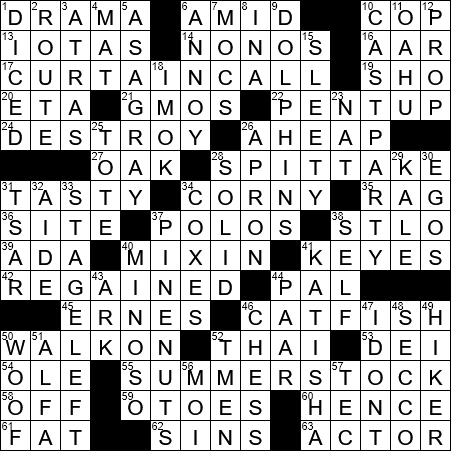 CELEBRITY CROSSWORD: To mark the 75th anniversary of the New York Times crossword, which debuted in 1942, we are publishing a series of puzzles co-created by famous people who solve the Times crossword, working together with regular Times puzzle contributors.

This collaboration is by the esteemed star of TV and film John Lithgow – who last month won an Emmy for Outstanding Supporting [63-Across] – working together with Brendan Emmett Quigley, of Brookline, Mass. This is Mr. Quigley’s 175th puzzle for The Times.

Each of today’s themed answers is a phrase one might hear in a theater, but each has been clued in a “punny” way:

The Aar (also called the “Aare” in German) is the longest river entirely in Switzerland. The Aar is a major tributary of the Rhine, and flows through Bern, the nation’s capital.

“Dexter” is a crime show that airs on Showtime. The title character works for the Miami Police Department as an expert in blood spatter patterns by day, but is a serial killer by night. The original series was based on the “Dexter” novels written by Jeff Lindsay. I haven’t seen this show myself, but my eldest son really enjoys it …

20. Info that might be given with a gate change : ETA

The comic maneuver in which someone spits out a drink in response to a joke or a surprising statement, that’s called a “spit-take”.

“Flowers for Algernon” was first a short story and then a novel, written by Daniel Keyes. It is a science fiction work about a mentally disabled man who undergoes surgery that briefly gives him the powers of a genius. Also featured in the tale is a laboratory mouse called Algernon, the first test subject to benefit from the experimental surgery.

“Pal Joey” is a 1940 novel by John O’Hara that was made into a stage musical and musical film with music and lyrics by Rodgers and Hart. There are two well-known songs from the musical: “I Could Write a Book” and “Bewitched, Bothered and Bewildered”. There’s also a film called “Pal Joey” starring Frank Sinatra, Rita Hayworth and Kim Novak. The film is loosely based on the stage musical.

The ern (sometimes “erne”) is also called the white-tailed eagle, or the sea-eagle.

A walk-on role in a performance is one in which the actor makes an appearance on stage or on set, but has no dialog. One line of dialog elevates the role to a “bit part”.

“Mater Dei” is Latin for “Mother of God”.

The Otoe (also Oto) Native American tribe originated in the Great Lakes region as part of the Winnebago or Siouan tribes. The group that would become the Otoe broke away from the Winnebago and migrated southwestwards ending up in the Great Plains. In the plains the Otoe adopted a semi-nomadic lifestyle dependent on the horse, with the American bison becoming central to their diet.

Sir John Falstaff is the lead character in Shakespeare’s “The Merry Wives of Windsor” and a supporting character in the two “Henry IV” plays. Falstaff is a self-promoting, obese and cowardly man. In “King Henry IV, part I”, Falstaff refers to his portly size, saying, “thou seest I have more flesh than another man, and therefore more frailty.”

Asa Gray was an important American botanist in the nineteenth century. He was a lifelong friend of Charles Darwin, albeit mainly through correspondence. Darwin’s book “Forms of Flowers”, was dedicated to Gray.

The Miami Dolphins football team was founded in 1966 by politician Joe Robbie and the comedian Danny Thomas.

Despite rumors to the contrary, Barack Hussein Obama II was indeed born in Hawaii. Future US President Obama was born on August 4, 1961 at Kapi’olani Maternity & Gynecological Hospital in Honolulu, Hawaii.

Apparently “sleet” is a term used to describe two different weather conditions. One is a shower of ice pellets, smaller than hail, and the second is a mixture of rain and snow, with the snow melting as it falls.

The world’s first telethon was took place in 1949. It was a 16-hour fundraiser hosted by Milton Berle that raised over a million dollars for the Damon Runyon Cancer Research Foundation. The term “telethon”, a portmanteau of “television” and “marathon”, was coined in the news media the day after the event.

26. Area in front of the front row of a theater : APRON

31. Leader with a title derived from the name “Caesar” : TSAR

The term “czar” (also tsar) is a Slavic word that was first used as a title by Simeon I of Bulgaria in 913 AD. “Czar” is derived from the word “Caesar”, which was synonymous with “emperor” at that time.

34. Ones calling out the rowing rhythm : COXES

The term “pesto” applies to anything made by pounding. What we tend to know as pesto sauce is more properly called “pesto alla genovese”, pesto from Genoa in northern Italy. I love, love pesto sauce …

Minnie Minosa is a Cuban-born former baseball player who had a very long professional career. He is one of just two player in Major League history to have played in five separate decades (40s-80s), the other being Nick Altrock.

“The Mikado” is a wonderful comic opera by Gilbert and Sullivan, set in the exotic location of Japan. “Mikado” is a former term for the “Emperor of Japan”. In the story, Nanki-Poo is the Mikado’s son, who falls in love with Yum-Yum.