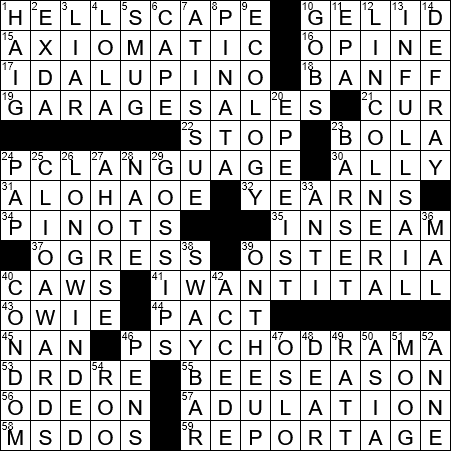 “Gelid” is such a lovely word, with the meaning “icy cold”. “Gelid” derives from the Latin “gelum” meaning “frost, intense cold”.

“Aloha ‘Oe” is a song of Hawaii composed by Liliuokalani, the last monarch of Hawaii and her only queen. The title translates as “Farewell to Thee”.

Princess Fiona is the love interest in the “Shrek” series of films.

Before “Shrek” was a successful movie franchise and Broadway musical, it was a children’s picture book called “Shrek!” authored and illustrated by William Steig. The title “Shrek!” came from the German/Yiddish word Schreck, meaning “fear” or “terror”.

Richard Gere and Juliette Binoche starred in “The Bee Season”, a 2005 movie adapted from the Myla Goldberg novel of the same name. The “bee” in the title is a spelling bee.

Richard Gere has played such great roles on the screen, and I find him to be a very interesting character off the screen. Gere has been studying Buddhism since 1978 and is a very visible supporter of the Dalai Lama and the people of Tibet.

The wonderful Juliette Binoche is a French actress and dancer. Binoche is perhaps most recognized in the US for her Oscar-winning portrayal of Hana in the 1996 movie “The English Patient”. I must say that a favorite Binoche film of mine is the lighter “Dan in Real Life” from 2007.

MS-DOS (short for Microsoft Disk Operating System) was the main operating system used by IBM-compatible PCs in the eighties and for much of the nineties.

Alexander Haig was Secretary of State under President Reagan, and White House Chief of Staff under Presidents Nixon and Ford. Famously, Haig took over temporary control of the country immediately after President Reagan was shot in 1981. To do so was a pragmatic move, while waiting on Vice President Bush to arrive in Washington. There was much debate at the time about the legality of the steps taken, as the presidential line of succession called out in the US Constitution is President, Vice President, Speaker of the House, President pro tempore of the US Senate, and then Secretary of State.

Governor Chris Christie of New Jersey is a prominent member of the Republican Party, and indeed a prominent player in the 2016 presidential campaign. Christie is a huge Bruce Springsteen fan and has attended over a hundred Springsteen concerts.

“Lola” is a fabulous song, written by Ray Davies and released by the Kinks back in 1970. Inspired by a real life incident, the lyrics tell of young man who met a young “lady” in a club, danced with her, and then discovered “she” was actually a transvestite. The storyline isn’t very traditional, but the music is superb.

20. One who tries to avoid being touched : EPEEIST

One meaning of “pap” is soft or semi-liquid food for babies and small children. “Pap” comes into English via French, from the Latin word used by children for “food”. In the 1500s, “pap” also came to mean “an oversimplified” idea. This gives us a usage that’s common today, describing literature or perhaps TV programming that lacks real value or substance. Hands up those who think there’s a lot of pap out there, especially on television …

25. They go to all the best spots : CLIO AWARDS

Here are some French terms for some unpleasant conditions:

That would be the suspension in an automobile.

49. Heavy-metal band with the hit albums “Out of the Cellar” and “Infestation” : RATT

Ratt is a rock band based in Los Angeles. Ratt was formed out of a San Diego group called Mickey Ratt.

In geographical terms there are three “Easts”. The Near East and Middle East are terms that are often considered synonymous, although “Near East” tends to be used when discussing ancient history and “Middle East” when referring to the present day. The Near/Middle East encompasses most of Western Asia and Egypt. The term “Far East” describes East Asia (including the Russian Far East), Southeast Asia and South Asia.

In the sixties, Robert Moog invented the Moog Synthesizer, an electronic device that he used to produce music. I used to own a few of his albums, including a Moog version of Mussorgsky’s “Pictures at an Exhibition”. What a great performance that was …