Constructed by: Jay Kaskel
Edited by: Will Shortz 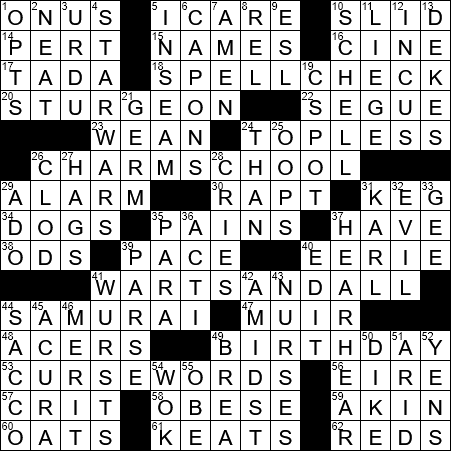 We have a spooky puzzle today, with themed clues referring to witches. We have a few more “scary” clues and answers, to boot:

Caviar is the roe of a large fish that has been salted and seasoned, and especially the roe of a sturgeon. Beluga caviar comes from the beluga sturgeon, found primarily in the Caspian Sea. It is the most expensive type of caviar in the world. 8 ounces of US-farmed beluga caviar can be purchased through Amazon.com for just over $850, in case you’re feeling peckish …

22. Smooth transition from one topic to the next : SEGUE

“Ghost and Mrs. Muir” is a 1947 movie based on a 1945 novel of the same name by Josephine Leslie (using the pen name “R. A. Dick”). Gene Tierney plays a young widow who rents a house haunted by the ghost of seaman played by Rex Harrison. The film is a light-hearted, romantic offering, and highly recommended …

On 11 June 1776, the Continental Congress appointed a committee of five people to draft a declaration of independence. Included in the five were John Adams and Thomas Jefferson. Adams persuaded the other committee members to give Jefferson the task of writing the first draft. A resolution of independence was passed by the Congress on 2 Jul 1776. The final draft of the declaration was approved by the Congress two days later, on July 4th. John Adams wrote a letter to his wife that included an assertion that July 2nd (the date of the resolution of independence) would become a great American holiday. Of course Adams was wrong, and it was actually the date the Declaration of Independence was finalized that came to be celebrated annually.

“Hyperion” is an 1818/1819 epic poem penned by John Keats, one that he abandoned and never actually finished. Here are some lines:

O tender spouse of gold Hyperion,
Thea, I feel thee ere I see thy face;
Look up, and let me see our doom in it;
Look up, and tell me if this feeble shape
Is Saturn’s; tell me, if thou hear’st the voice
Of Saturn; tell me, if this wrinkling brow,
Naked and bare of its great diadem,
Peers like the front of Saturn.

Beaujolais is a red wine made from the Gamay grape that is produced in the Beaujolais historical province that is part of the Burgundy wine-making region.

A capon is a castrated cockerel (poor guy!). Castration has a profound effect on the bird (duh!) making the meat more tender to eat when it is slaughtered.

Benjamin Franklin is featured on one side of the hundred-dollar bill (also called a “C-spot”), and Philadelphia’s Independence Hall on the other side. There is a famous error in the image of Independence Hall. If you look closely at the clock face at the top of the building you can see that the “four” is written in Roman numerals as “IV”. However, on the actual clock on Independence Hall, the “four” is denoted by “IIII”, which has been the convention for clock faces for centuries.

I really, really don’t do horror films. The one exception perhaps is the original “Halloween” movie, starring Jamie Lee Curtis and Donald Pleasance. To me, this first movie in the “Halloween” series is more in the style of Hitchcock’s “Psycho” whereas the sequels were just chock full of gore and graphic violence.

Nicola Sacco and Bartolomeo Vanzetti were two anarchists accused of committing murder during an armed robbery in 1920. They were arrested the day after the crime. There followed two controversial trials, guilty verdicts and several appeals that went all the way to the US Supreme Court. Despite mounting evidence that the pair was innocent, the guilty verdicts were repeatedly upheld. A lot of the public accepted that Sacco and Vanzetti were not guilty, and many protests were staged. Regardless, the two were executed in the electric chair in 1927.

50. Construction on the coast of Holland : DIKE

A dike is an embankment usually made of earth and rock that is used to prevent floods.