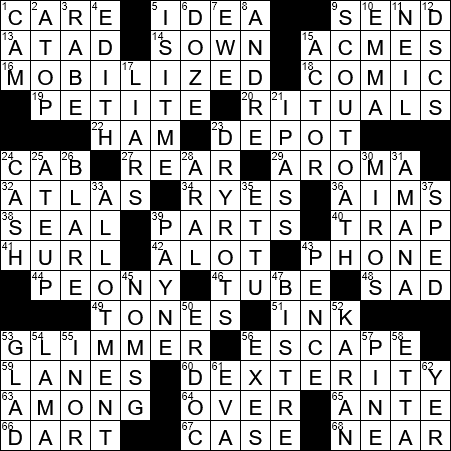 There’s a note with today’s puzzle that reads:

The one-word Across clues all have an unusual relationship with their answers.

Each of the across-clues is a homonym of the “real” clue.

“To pass muster” means “to be deemed acceptable”. One musters troops, often for inspection. So, the original meaning of “pass muster” was to “get through a military inspection successfully”.

Our term “depot”, meaning a station or warehouse, comes from the French word “dépôt”. The French term translates into English as “deposit” or “place of deposit”.

The word “hose” meaning a “covering for the leg” has the same roots as the contemporary German word “Hose” meaning “trousers, pants”.

Cam Newton plays quarterback for the NFL’s Carolina Panthers. One interesting thing about Newton is that he is a pescetarian, eating seafood but not the flesh of other animals. Sounds fishy to me …

Dame Edith Sitwell was a British poet, elder sister to Osbert and Sacheverell Sitwell who were also noted writers.

According to the World Organization of the Scout Movement, the Scout Promise is:

On my honour I promise that I will do my best—
To do my duty to God and my Country
To help other people at all times and
To obey the Scout Law.

Emma Watson is the English actress famous for playing Hermione Granger in the “Harry Potter” series of movies. Watson continued her education while pursuing her acting career and studied at Brown University in Providence, Rhode Island.

Emma Thompson is one of my favorite English actresses, and someone who has appeared in many of my favorite films. She probably first came to attention in the US when she won an Oscar for her role in “Howards End”, which she followed up with “Remains of the Day” and “In the Name of the Father”. Perhaps my favorite production of hers is her own adaptation of “Sense and Sensibility”, which won her Oscars for Best Adapted Screenplay and Best Actress. Emma Thompson went to Cambridge University and was good friends with a host of successful British actors and entertainers, including her ex-boyfriend Hugh Laurie who is famous in the US for playing the title role in television’s “House”.

I saw Neil Diamond in concert back in the mid-nineties, and I must say he does put on a great show. His voice is cracking a bit, but that didn’t seem to spoil anyone’s enjoyment. I’ve also seen Diamond interviewed a few times on television, and I wouldn’t say he has the most scintillating of personalities.

24. Bills that one doesn’t mind piling up : CASH

30. Some works at MoMA and the Art Institute of Chicago : MIROS

45. Declaration on a Chinese menu : NO MSG

50. One who may order an operation, informally : ER DOC

“Kramer vs. Kramer” is a 1979 film based on a Avery Corman novel. The movie stars Meryl Streep and Dustin Hoffman as a couple getting a divorce, and the impact that the breakup has on their young son.

61. One of the Gabors of old Hollywood : EVA

A “sawyer” is someone who saws wood for a living.