Constructed by: Samuel A. Donaldson & Brad Wilber
Edited by: Will Shortz 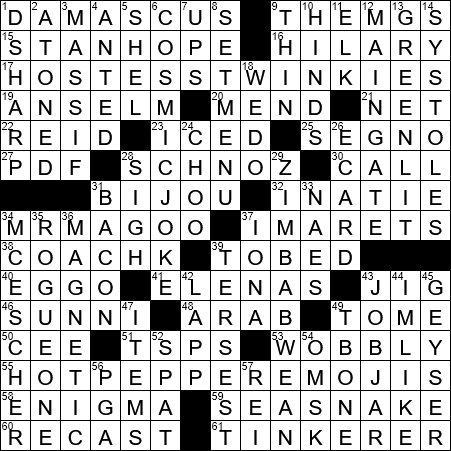 1. The Mideast’s City of Jasmine : DAMASCUS

Booker T. & the M.G.’s were in effect the house band at Stax Records, and so appeared on loads of famous recordings including some by Wilson Pickett and Otis Redding. As such, they became synonymous with what became known as the Stax Sound. One of the unique things about the band was that it was racially integrated, with two white guys making a name for themselves in soul music, which at the time was very much part of black culture. And of course Booker T. & the M.G.’s produced the fabulous 1962 hit “Green Onions”.

A stanhope is a small, horse-drawn carriage with a high seat and a closed back. The carriage was named for a Captain Henry Stanhope.

Anselm was one of the Archbishops of Canterbury (in England) during Medieval times, from 1093 to 1109. As well as holding the important office within the Church, Anselm was an active and respected philosopher. He is often referred to as the founder of scholasticism, a method of learning that reigned in Medieval universities right across Europe for about 400 years.

25. Score mark indicating a passage to be repeated : SEGNO

“Schnoz” is a slang term for a nose, particularly a large one.

The noun “bijou” (plural “bijoux”) is used for a small expensive trinket. “Bijou” is French for “jewel”.

34. Toon who often congratulates himself with “You’ve done it again!” : MR MAGOO

Imarets were inns or hostels used by pilgrims throughout the Ottoman Empire. The network of imarets was set up to provide food to anyone in need, so they also served as “soup kitchens”.

48. Steed noted for its stamina : ARAB

There are three letters C (cee) in the word “Connecticut”.

Sexting (a portmanteau of “sex” and “texting”) is the sending of explicit dialog and images between cell phones. The term “sexting” was coined by the UK’s “Sunday Telegraph Magazine” in a 2005 article. Whatever happened to dinner and a movie …?

I used to live in the Philippines and spent almost every weekend SCUBA diving (happy days!). Occasionally, I’d come across a sea snake slithering through the water. The rule was always to never swim “above” sea snakes as they don’t have gills and have to come to the surface to breathe. You don’t want to be in the way of a sea snake when it’s coming up for a breath of air, as all sea snakes are venomous and many fatalities have been recorded from their bites.

“Massif” is a geological term describing a section of the earth’s crust that moves upwards due to the action of tectonic plates. The whole massif retains its structure, with movement taking place at surrounding fault lines. The term “massif” is also used for a group of mountains formed by such geological action. “Massif” is French for “massive”.

14. Contractions of the heart : SYSTOLES

In the heart, systole describes the rhythmic contraction of the ventricles to pump the blood around the body.

29. Dweller between the Zambezi and Limpopo rivers : ZIMBABWEAN

The country now known as Zimbabwe started out as a British colony called Southern Rhodesia, and later just “Rhodesia”. The original colony was named for Cecil Rhodes, the British empire builder.

33. Turndowns across the Atlantic : NAES

“Nae” is the Scottish vernacular for “no”.

37. Where Macbeth is buried : IONA

Fyodor Dostoyevsky’s most famous novels are “Crime and Punishment” and “The Brothers Karamazov”. Dostoyevsky was arrested in 1849 and sentenced to death by Tsar Nicholas I for being part of a liberal intellectual group. He endured a mock execution before being told that his sentence was commuted to four years hard labor and exile in a camp at Omsk in Siberia.