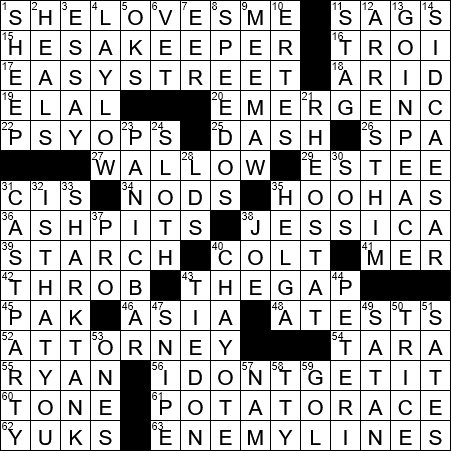 She loves me not …

19. It holds the world record for most passengers on a commercial airliner [1,088] : EL AL

In 1991, the Israeli government responded to political turmoil in Ethiopia with an evacuation of Ethiopian Jews from Addis Ababa. The massive undertaking was known as Operation Solomon, and involved continuous shuttling of 34 large aircraft for 36 hours non-stop. On one of those flights, an El Al 747 carried 1,088 passengers. That’s a record number of a passengers for a commercial airliner.

Psychological Operations (PSYOP) is a contemporary name for propaganda, the “winning of hearts and minds in a combat zone.

38. Shylock’s daughter in “The Merchant of Venice” : JESSICA

Shylock is a character in William Shakespeare’s “The Merchant of Venice”. Shylock is a moneylender and he gives a loan which is to be secured by “a pound of flesh”. When the money cannot be repaid, Shylock demands his pound of flesh, the collection of which would kill the poor victim of his scheme.

46. Area worth the most bonus troops in the game Risk : ASIA

52. Guarantee of the Sixth Amendment : ATTORNEY

The Sixth Amendment to the US Constitution is the part of the Bill of Rights that deals with an individual’s rights when facing criminal prosecution.

The Lia Fáil is the coronation stone that is found on the Hill of Tara, the traditional seat of the High Kings of Ireland. “Lia Fáil” translates from Irish as “stone of destiny”.

William Shakespeare wrote his tragedy “Troilus and Cressida” in 1602. The play was inspired by “The Iliad”, and is a retelling of events during the Trojan War leading up to the death of Hector.

“Harper’s Bazaar” was first published in 1867, making it the first women’s fashion magazine to hit the newsstands.

A rheostat is an electrical device that can offer a varying degree of resistance to current flow. The English physicist Sir Charles Wheatstone first coined the term, using the Greek “rheos” meaning “flowing stream” and “stat” meaning “regulating device”.

The Church of Jesus Christ of Latter-day Saints, often abbreviated to “LDS”, is known colloquially as the Mormon Church.

30. Request for an island getaway? : SOS

The combination of three dots – three dashes – three dots, is a Morse signal first introduced by the German government as a standard distress call in 1905. The sequence is remembered as the letters SOS (three dots – pause – three dashes – pause – three dots), although in the emergency signal there is no pause between the dots and dashes, so SOS is in effect only a mnemonic. Similarly, the phrases “Save Our Souls” and “Save Our Ship” are also mnemonics, introduced after the “SOS” signal was adopted.

“Shark Tank” is a reality television show that features aspiring entrepreneurs making pitches to potential investors (the “sharks”) as they try to grow their businesses. The show is a Mark Burnett production and is based in a British series called “Dragons’ Den”.

“Morning Joe” is a show broadcast by MSNBC each weekday morning. It is hosted by Joe Scarborough, and first went on the air in 2007. Given the name of the show, Starbucks were very content being the show’s sponsor from 2009 through 2013, and got lots of product placement.

Dante Alighieri (usually just “Dante”) was an Italian poet of the Middle Ages. Dante’s “Divine Comedy” is widely considered to be the greatest literary work ever written in the Italian language.

“To slake” is to satisfy a craving, as in slaking one’s thirst.

To do sums, we need to total the columns of ones, tens, hundreds, etc.

TTY is an acronym for a teletype writer, a device that is used at either end of a telephone line when one or both conversing parties is deaf. The teletype writer passes written messages to and fro between each of the terminals.

19. It holds the world record for most passengers on a commercial airliner [1,088] : EL AL

34. Some signals from pitchers : NODS

38. Shylock’s daughter in “The Merchant of Venice” : JESSICA

46. Area worth the most bonus troops in the game Risk : ASIA

52. Guarantee of the Sixth Amendment : ATTORNEY

30. Request for an island getaway? : SOS

31. Celebration after a run? : CAST PARTY