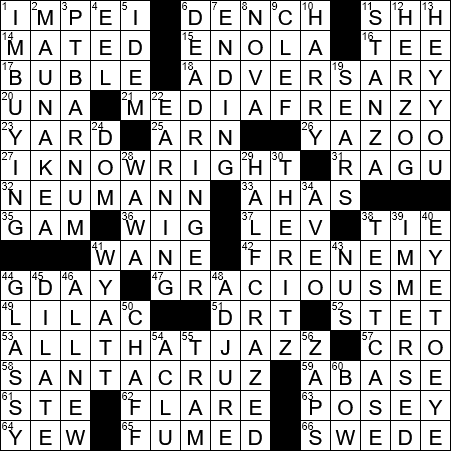 There’s a big capital letter T (tee) at the beginning of the word “Texas”.

Michael Bublé is a singer from Burnaby in British Columbia. He is of Italian descent on his father’s side. Bublé has held dual Italian-Canadian citizenship since 2005.

In the comic strip, Arn is the eldest son of Prince Valiant and Aleta is his wife. Edward, the Duke of Windsor, called the “Prince Valiant” comic strip the “greatest contribution to English Literature in the past one hundred years”. I’m not so sure …

The Russian author Leo Tolstoy is best known for his novels “War and Peace” and “Anna Karenina”. He also wrote the much-respected novellas “Hadji Murad” and “The Death of Ivan Ilyich”.

A frenemy is someone who feigns friendship but who is actually an enemy or competitor.

Archie Andrews was the main character in a comic book series introduced in 1941 by Archie Comics. Archie was such a successful character that he went on to appear in a radio series, a syndicated comic strip and two television cartoon shows. Famously, Archie got himself in a love triangle with Betty Cooper, the girl next door, and Veronica Lodge, the only child of the richest man in town.

The 2000 movie “Dr. T & the Women” is a pretty good film, starring Richard Gere in the title role. There can’t be many romantic comedies about gynecologists …

Richard Gere has played such great roles on the screen, and I find him to be a very interesting character off the screen. Gere has been studying Buddhism since 1978 and is a very visible supporter of the Dalai Lama and the people of Tibet.

“All That Jazz” is a song from the 1975 musical “Chicago”, which was choreographed by the great Bob Fosse. “All That Jazz” was later used as the title for a 1979 film directed by Fosse that features a main character who is a theater director and choreographer, and who greatly resembles Fosse himself.

2. The world’s tallest mountain, base to peak : MAUNA KEA

3. Who said “Without promotion, something terrible happens … nothing!” : PT BARNUM

Phineas Taylor “PT” Barnum was one of the great American showmen, famous for founding the Barnum & Bailey Circus. By some measures, Barnum was the first ever “show business” millionaire. Beyond the world of entertainment, Barnum was also a politician for a while and served two terms in the Connecticut legislature, and was mayor of the city of Bridgeport. Barnum was a very successful author as well. One of his most famous books was “The Humbugs of the World”, an exposé of deceptions in the world of entertainment. He was a believer in illusions, providing they gave value for money in terms of entertainment. However, Barnum had an intense dislike of fraudulent deception and came down hard on spiritualist mediums in particular.

A dragon roll is a sushi dish made from eel, cucumber, seaweed, rice and avocado. I am sure it’s delicious … without the eel!

5. Latin word in a footnote : IDEM

A “ringer” was originally a fast horse that was substituted surreptitiously into a race for a slower one. The term was derived from the verb “to ring in”, meaning to substitute. We use the phrase “dead ringer” to describe an exact duplicate.

The Chevrolet Nova was produced by General Motors from 1962 to 1979, and from 1985 to 1988. I owned one of those 1985-1988 Novas many years ago. Those latter models were actually Toyota Sprinters that were assembled just down the road here in Fremont, California in a GM/Toyota joint venture.

“Dirty” Harry Callahan was the protagonist in a series of five movies starring Clint Eastwood:

Saul Bellow was the only writer to have won the National Book Award three times. He also won the Nobel Prize for Literature in 1976. Bellow was a Canadian-born American writer, and among his most famous works were “Herzog” and “Humboldt’s Gift”.

A tot drinks “wawa” (water), perhaps out of a sippy cup.

The Chevrolet Aveo is a subcompact automobile that has been around since 2002. The Aveo is manufactured by GM Daewoo, the GM subsidiary in South Korea. Although the Aveo name is still used in some markets, here in North America the Aveo has been sold as the Chevrolet Sonic since 2012. By the way, GM Daewoo is the third largest manufacturer of automobiles in South Korea, after Hyundai and Kia.

Our word “adjure” comes from the Latin “adjurare”, meaning “to swear to”. We use to the term “adjuration” to mean an earnest entreaty or plea.

26. Tributary of the Mississippi : YAZOO

2. The world’s tallest mountain, base to peak : MAUNA KEA

3. Who said “Without promotion, something terrible happens … nothing!” : PT BARNUM

5. Latin word in a footnote : IDEM