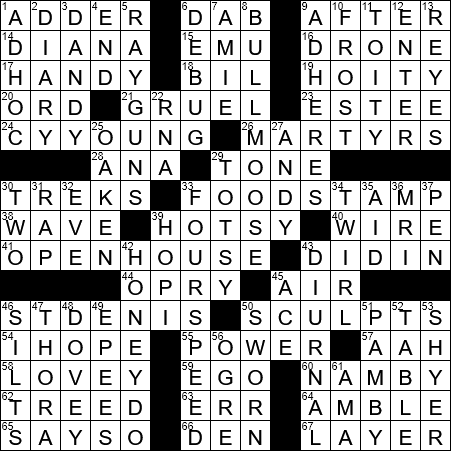 Today’s themed answers are rhyming phrases comprising two words that cross each other in the grid:

There are several species of venomous snakes that are referred to as puff adders. The so-called common puff adder is more correctly called the Bitis arietans. The most widespread snake in Africa, the common puff adder is responsible for more snakebite fatalities on the continent than any other snake.

The original Brylcreem product was a pomade introduced in England in 1928. When it first appeared in a television advertisement it was touted with a jingle that started out:

Bryl-creem, a little dab’ll do ya,
Use more, only if you dare,
But watch out,
The gals will all pursue ya,–
They’ll love to put their fingers through your hair.

Fort Ord was an army post on Monterey Bay in California named after a General Ord, established in 1917 and closed in 1994. The fort was in a spectacular location with miles of beachfront, and it also had that lovely California weather. The old fort’s land is now managed as the Fort Ord National Monument.

“Please, sir. I want some more” are words spoken by the title character in the novel “Oliver Twist” by Charles Dickens. . Oliver is addressing Mr. Bumble, asking for an extra helping of gruel in the workhouse.

Estée Lauder was a very successful businesswoman, with a reputation as a great salesperson. Lauder introduced her own line of fragrances in 1953, a bath oil called “Youth Dew”. “Youth Dew” was marketed as a perfume, but it was added to bathwater. All of a sudden women were pouring whole bottles of Ms. Lauder’s “perfume” into their baths while using only a drop or two of French perfumes behind their ears. That’s quite a difference in sales volume …

24. Award named for the winningest pitcher of all time : CY YOUNG

33. Coupon for the needy : FOOD STAMP

The US government’s Food Stamp program is more correctly referred to as the Supplemental Nutrition Assistance Program (SNAP). The US Department of Agriculture administers the program, originally distributing coupons (or “stamps”) to people with low incomes to assist with the purchasing of food.

40. Listening device on a narc : WIRE

“Narc” is a slang term for a law enforcement officer who tracks down criminals associated with illegal drugs. “Narc” is short for “narcotics officer”. Narcs might work for the Drug Enforcement Administration (DEA).

“Real estate agent” is a general, generic term. “Realtor” is the name given to a member of the trade association known as the National Association of Realtors (NAR). The NAR has gone so far as the trademark the term “Realtor” in the US.

Not only is Saint Denis (also “Denys”) the patron saint of France, but he is also the patron saint of Paris. Denis was the first Bishop of Paris, in the 3rd century AD, and was martyred by having his head chopped off. The legend surrounding this event is that the executed Denis picked up his head and walked for six miles, delivering a sermon the whole way.

59. Part of the Freudian psyche : EGO

Sigmund Freud created a structural model of the human psyche, breaking it into three parts: the id, the ego, and the super-ego. The id is that part of the psyche containing the basic instinctual drives. The ego seeks to please the id by causing realistic behavior that benefits the individual. The super-ego almost has a parental role, contradicting the id by introducing critical thinking and morals to behavioral choices.

Back in 1947, famed computer programmer Grace Hopper noticed some colleagues fixing a piece of equipment by removing a dead moth from a relay. She remarked that they were “debugging” the system, and so Hopper has been given credit for popularizing the term.

After President Theodore Roosevelt left office in 1909, he became disillusioned with the direction being taken by his own Republican Party. Roosevelt decided to run for the presidency again, and in doing so formed the Progressive Party. The new organization became known as the Bull Moose Party after Roosevelt was quoted as saying “I feel like a bull moose” soon after the new party had been launched. Roosevelt had a very poor showing in the 1912 presidential election, and the Progressive Party dissolved a few years later, in 1916.

Andy Roddick is a former World No. 1 tennis player from the US. Roddick retired in 2012, although he has been playing in what’s referred to as World Team Tennis.

Andy Rooney began his career in newspapers during WWII working for “Stars and Stripes” in London. He had some memorable experiences during the war, including flying on the first American bombing raid over Germany. He was also one of the first American journalists to visit the German concentration camps as they were liberated. He started his segment called “A Few Minutes with Andy Rooney” on CBS’s “60 Minutes” way back in 1978, and so was on our screens for over 30 years. Rooney passed away in 2011.

Edward Bulwer-Lytton was an English politician and writer. Among his writings, Bulwer-Lytton came up with some phrases that have endured, such as:

Many of the Hopi nation live on a reservation that is actually located within the much larger Navajo reservation in Arizona.

43. Active during the daytime : DIURNAL

The sword known as an épée has a three-sided blade. The épée is similar to a foil and sabre, both of which are also thrusting weapons. However, the foil and saber have rectangular cross-sections.