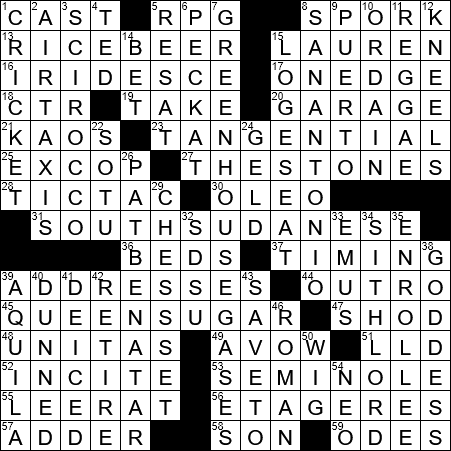 Ethiopia is a country in the Horn of Africa. It is the second-most populous nation on the continent (after Nigeria), and with 90 million inhabitants, it is the most populous landlocked country in the world. Most anthropologists believe that our Homo sapiens species evolved in the region now called Ethiopia, and from there set out to populate the planet.

The honorary degree of Legum Doctor (LL.D.) translates from the Latin as Doctor of Laws, a plural. This practice of using the plural originated in Cambridge University in England, as one was awarded an LL.D. after having been taught both Canon Law and Civil Law.

An “étagère” is a piece of furniture with open shelves, often used to display small ornaments. The name is French, coming from “étage” meaning “shelf”. I can’t stand them …

The Viperidae are a family of venomous snakes commonly referred to as vipers.

The Wailers were the band, formed in Jamaica in 1963, whose most famous member was Bob Marley. The band’s name went through a few iterations, starting out as the Teenagers, then the Wailing Rudeboys, the Wailing Wailers, and finally the Wailers.

We can use the verb “to geld” to mean “to weaken, deprive of strength”. The term comes from the act of gelding an animal, castration of the male. “Geld” comes from the Old Norse word “gelda” meaning “castrate”.

Pat Benatar is a singer from Brooklyn, New York. Benatar’s biggest hits are “Hit Me with Your Best Shot”, “Love is a Battlefield” and “We Belong”.

“To dun” is to insist on payment of a debt. The etymology of the term is unclear, with one suggestion that it dates back to a famous debt collector in London named Joe Dun.

36. Their heads and feet are usually the same distance from the ground : BEDS

2. They might be used in making hops : AIR TAXIS

6. Eat with no enthusiasm : PECK AT