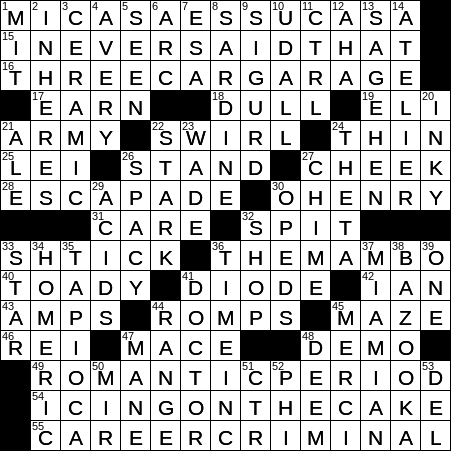 “To attenuate” is to reduce in intensity or effect, or to make thin or slender.

Pérez Prado was a bandleader from Cuba who earned for himself the nickname “King of the Mambo”. He was the son of Sara Prado and Pablo Pérez, so his stage name was a melding of his paternal and maternal family names.

40. One really aiming to please : TOADY

Ian Somerhalder got his big break as an actor in the TV drama “Lost”, and followed that up with a part in TV’s “The Vampire Diaries”.

“The Vampire Diaries” is a series of horror novels by L. J. Smith that is aimed at teens. There is a spinoff television series of the same name. I don’t do vampires …

49. Wordsworth, Coleridge and Byron wrote in it : ROMANTIC PERIOD

1. Home of many Physics Nobelists, for short : MIT

6. Part of a cardioid figure : ARC

A figure that is cardioid-shaped is heart-shaped.

Esa-Pekka Salonen is a Finnish conductor and composer.

Mo Udall was a US Representative from Arizona. Prior to entering politics, Udall played professional basketball with the Denver Nuggets. In 1976, Udall made a run for the Democratic Party’s presidential nomination. He lost to then-Governor Jimmy Carter.

An atelier is an artist’s studio, with “atelier” being the French word for “studio” or “workshop”.

24. Symbol for a plane angle, in geometry : THETA

The Greek letter theta is commonly used in geometry to represent the angle between two lines (say at the corner of a triangle).

The cassava plant is a woody shrub native to South America grown largely for its carbohydrate-rich tubers. In fact, the cassava is the third largest food source of carbohydrates (for humans) in the world. Ordinarily, that carbohydrate is extracted from the plant, dried as flour and is called tapioca.

37. Resident of the so-called “Capital of Latin America” : MIAMIAN

A bazooka is a metal tube rocket launcher. The first bazooka-type weapon was developed for the US Army just before the end of WWI. The weapon is also known as a “stovepipe”, due to its appearance.

PhD is an abbreviation for “philosophiae doctor”, Latin for “teacher of philosophy”. Often, candidates for an earned PhD already hold a bachelor’s and a master’s degree, so a PhD might be considered a “third degree”.