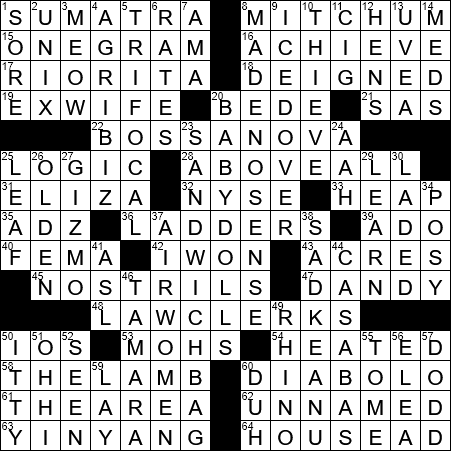 1. Island known for its coffee : SUMATRA

8. “So effective you can skip a day” sloganeer, once : MITCHUM

“Rio Rita” is a 1942 comedy movie that was adapted from a 1927 Broadway musical of the same name by Flo Ziegfeld. Comedy duo Abbott and Costello star as stowaways who get mixed up with Nazi spies.

Actress Elizabeth Taylor married eight times, to seven husbands. Those marriages were to:

The Venerable Bede was a monk in the north of England in the first century AD. Saint Bede is mainly known as an author and scholar, publisher of “The Ecclesiastical History of the English People”. In his writings, Bede struggled with the two common ways of referring to dates at that time. Bede turned to the anno domini dating method that had been devised by Dionysius Exiguus in 525. Bede’s writings of circa 730 were extremely influential and helped popularize the the “anno domini” method.

21. Carrier in the Star Alliance : SAS

The Star Alliance was the airline industry’s first code-sharing alliance, and was created in 1997. The founding representative from the US was United Airlines. The other four members of that first alliance were SAS, Thai Airways, Air Canada, and Lufthansa.

Bossa Nova is a style of music from Brazil that evolved from samba. The most famous piece of bossa nova is the song “The Girl from Ipanema”.

Elizabeth “Eliza” Schuyler Hamilton was the wife of Founding Father Alexander Hamilton. Eliza was with her husband when he passed away the day after his famous duel with Vice President Aaron Burr.

“Bucket of bolts”, crate and “heap” are slang terms for a junky car.

An adze (also “adz”) is similar to an axe, but is different in that the blade of an adze is set at right angles to the tool’s shaft. An axe’s blade is set in line with the shaft.

The first video game featuring the ape called Donkey Kong was created in 1981. That first Donkey Kong game also introduced the world to the character known as Mario, four years before the game Super Mario Bros became such a big hit.

45. They’re just above a handlebar : NOSTRILS

iOS is what Apple now call their mobile operating system, It was previously known as iPhone OS.

An epithet is a word or phrase, one often used in a name to describe a quality of the person or thing bearing that name. For example, King Richard I was also known as Richard the Lionheart.

To miff is to put out, to tee off, and is verb that has been around since the early 1600s. Interestingly, in 1824 Sir Walter Scott described the word “miffed” as “a women’s phrase”. That would get him a slap, I’d say …

37. Amelia Earhart and others : AIRWOMEN

38. Internet meme of the star of “The Matrix” looking sullen : SAD KEANU

Keanu Reeves is a Canadian actor whose most celebrated roles were a metalhead in “Bill & Ted’s Excellent Adventure” (1989), a cop in “Speed” (1994) and the protagonist Neo in “The Matrix” series of films. Although Reeves is a Canadian national, he was born in Beirut, Lebanon. Reeves has some Hawaiian descent, and the name “Keanu” is Hawaiian for “the coolness” or “cool breeze”..

Gallaudet University is a private school in Washington, D.C. that is focused on the education of the deaf and hard of hearing. Gallaudet was founded in 1864 and is officially a bilingual institution, with classes held in both English and ASL.

A casaba is type of honeydew melon. The casaba takes its name from the Turkish city of Kasaba, from where the fruit was imported into America in the late 1800s.

“Tome” first came into English from the Latin “tomus” which means “section of a book”. The original usage in English was for a single volume in a multi-volume work. By the late 16th century “tome” had come to mean “a large book”.

56. Birthplace of the philosopher Parmenides : ELEA

Parmenides was a philosopher in Ancient Greece. Parmenides was born in the Greek city of Elea located on the Italian coast, and so the school of philosophy that he founded is called the Eleatic School.

There is often confusion between the verbs “to lie” and “to lay”. The latter is a transitive verb, and so needs an object. So we can’t “lay down”, we must “lie down”. But, we can lay out a plan.

1. Island known for its coffee : SUMATRA

8. “So effective you can skip a day” sloganeer, once : MITCHUM

21. Carrier in the Star Alliance : SAS

45. They’re just above a handlebar : NOSTRILS

48. They write many opinions : LAW CLERKS

60. Toy consisting of a spool on a string : DIABOLO

9. Became slippery, in a way : ICED OVER

20. Toys that may open and close their eyes : BABY DOLLS

37. Amelia Earhart and others : AIRWOMEN

38. Internet meme of the star of “The Matrix” looking sullen : SAD KEANU

56. Birthplace of the philosopher Parmenides : ELEA