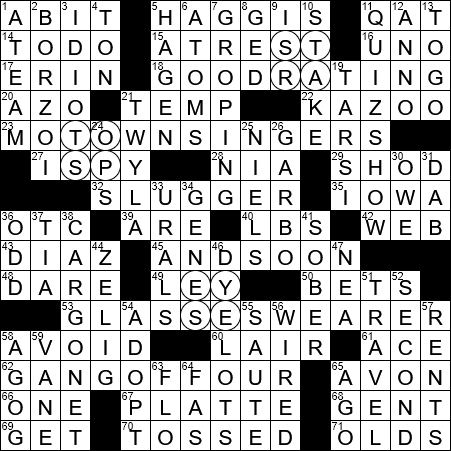 Constructed by: Peter A. Collins

Khat (also “qat”) is a flowering plant, the leaves of which are chewed by some in the Horn of Africa and the Arabian Peninsula in particular. The leaves contain an alkaloid called cathinone which stimulates the body like an amphetamine.

In my youth I remember being taught a great card game, by a German acquaintance of mine, called Mau Mau. Years later I discovered that Uno is basically the same game, but played with a purpose-printed deck instead of the regular deck of playing cards that’s used for Mau Mau. I hear that Mau Mau is derived from the game called Crazy Eights.

St. George’s Channel is a sea channel lying south of the Irish Sea and north of the Celtic Sea. It separates Wales from the southeast of Ireland.

22. Instrument anyone can play : KAZOO

The modern instrument we know today as the kazoo was invented by one Alabama Vest of Macon, Georgia in the 1800s. The kazoo first came to the public’s attention at the Georgia State Fair of 1852, when it was known as the “Down-South Submarine” (because of it’s shape, I would imagine).

The original lineup of the Four Tops agreed to form a vocal quartet when they were high school students together in Detroit. The group started out using the name “The Four Aims”, but changed it to Four Tops to avoid confusion with the Ames Brothers.

Nia Vardalos is an actress and screenwriter whose biggest break came with the 2002 film “My Big Fat Greek Wedding”, which she wrote and in which she starred. The film tells the story of a Greek-American woman marrying a non-Greek Caucasian American who converts to the Greek Orthodox Church to facilitate the marriage. The storyline reflects the actual experiences of Vardalos and her husband, actor Ian Gomez. Vardalos and Gomez appear together as hosts of the reality competition “The Great American Baking Show”.

Barry Bonds is a former baseball player who holds numerous records as a batter. He is a controversial figure in the sport, mired for years in baseball’s steroids scandal.

“Charlie’s Angels” is a fun action movie from 2000 that is a spinoff from the iconic TV show of the same name from the seventies. The “Angels” in the movie version are Cameron Diaz, Drew Barrymore and Lucy Liu, with Bill Murray as John Bosley. John Forsythe provides the voice of the unseen “Charlie”, just as he did in the original television show.

Drew Barrymore has quite the pedigree, being a granddaughter of Hollywood icon John Barrymore. She appeared in her first movie at the age of five, in 1980’s “Altered States”, but her big break was in 1982’s “E.T. the Extra-Terrestrial”. That same year she became the youngest host of “Saturday Night Live” at the age of seven. She has been invited back to host the show quite a few times and has now hosted six times, more than any other female celebrity.

The elastic cord known as “bungee” cord is also known as “shock” cord. The term “bungee” probably comes from Britain where it was schoolboy slang for “rubber eraser”, likely coming from the words “bouncy” and “spongy”.

Bob Ley works as a sportscaster with ESPN. Ley has worked with ESPN longer than any other on-air employee.

A parlay is a combination wager, one that links two or more bets. All bets have to win in order to collect on a parlay.

62. Faction in China’s Cultural Revolution … or a hint to each set of circled letters : GANG OF FOUR

The Gang of Four was a group of four Communist Party officials that came to the fore during the Cultural Revolution in China in the sixties and seventies. The most prominent member of the group was Jiang Qing, the last wife of Communist Party Chairman Mao Zedong. The Gang of Four fell from favor within one month of Mao Zedong dying, in 1976. They eventually appeared in court and received lengthy jail sentences.

67. River paralleled by I-80 through a long stretch of the Plains : PLATTE

The borzoi breed of dog looks like a hairy version of a greyhound. The borzoi is also known as the Russian wolfhound.

Walter Hagen won 11 major tournaments, in the first half of the 20th century. Only Jack Nicklaus and Tiger Woods have won more majors.

I love Twyla Tharp’s choreography, and her patented “moves”. Tharp was born in Portland, Indiana in 1941. She was named after Twila Thornburg, the “Pig Princess” of the 89th Annual Muncie Fair in Indiana. That’s one to tell to the grandkids …

22. Instrument anyone can play : KAZOO

35. Its motto is “Our liberties we prize and our rights we will maintain” : IOWA

62. Faction in China’s Cultural Revolution … or a hint to each set of circled letters : GANG OF FOUR

67. River paralleled by I-80 through a long stretch of the Plains : PLATTE

38. Mesh for securing items in a truck bed : CARGO NET

59. Pointer for a meteorologist? : VANE