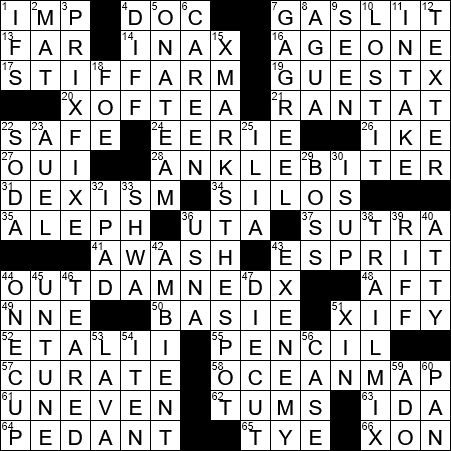 15D. Treasure hunt phrase … or a hint to seven Across answers : X MARKS THE SPOT

4. Word file, in brief : DOC
Microsoft Word documents have the “.doc” file extension, at least those created prior to the introduction of Microsoft Office 2007. The extension used now is “.docx”.

7. Like London streets during Dickens’s time : GASLIT
Charles Dickens was an English novelist who achieved great notoriety in his own time, and is still regarded as perhaps the greatest novelist of the Victorian period. Many of his novels explored the plight of the poor in Victorian society, perhaps driven by his own experiences as a child. Dickens had to leave school to work in a factory after his father was thrown into a debtor’s prison. As a result, Dickens had to educate himself, and did so with great success. He is said to have pioneered the serial publication of narrative fiction, with his first success coming with the 1835 serial publication of “Pickwick Papers”. And everyone’s favorite has to be his 1843 novella, “A Christmas Carol”.

16. What precedes a terrible period? : AGE ONE
A reference to the “terrible twos”.

26. 34th prez : IKE
When the future president was growing up, the Eisenhowers used the nickname “Ike” for all seven boys in the family, as “Ike” was seen as an abbreviation for the family name. “Big Ike” was Edgar, the second oldest boy. “Little/Young Ike” was Dwight, who was the third son born. Dwight had no sisters.

31. Oppressive rule by absolute power : DESPOTISM
A “despot” is a ruler with absolute power, often one who wields that power oppressively. “Despot” is an old French term from the 14th century, ultimately derived from the Greek “despotes” meaning “master of a household, absolute ruler”.

34. They are often grain-fed : SILOS
“Silo” is a Spanish word that we absorbed into English, originally coming from the Greek word “siros” that described a pit in which one kept corn.

35. Hebrew leader? : ALEPH
“Aleph” is the first letter of the Hebrew alphabet, and “beth” the second.

36. Actress Hagen : UTA
Uta Hagen was a German-born American actress. Hagen married Jose Ferrer in 1938, but they were divorced ten years later after it was revealed that she was having a long-running affair with Paul Robeson. Her association with Robeson, a prominent civil rights activist, earned her a spot on the Hollywood Blacklist during the McCarthy Era. This forced her away from film, but towards a successful stage career in New York City.

37. Kama ___ : SUTRA
The word “sutra” is used in Hinduism for a learned text, one usually meant to be studied by students.

The “Kama Sutra” is renowned for its descriptions of positions that can be used for sexual intercourse, but the sutra includes many other texts that deal with various matters of a sexual nature including how to woo a woman, the conduct of a “chief wife”, the conduct of “other wives”, how to make money as a courtesan, and much more, as if that isn’t enough …

43. Sparkle : ESPRIT
Our word “esprit”, meaning “liveliness of mind”, comes to us from Latin via French. The Latin “spiritus” means “spirit

44. Command in “Macbeth” : OUT, DAMNED SPOT!
Lady Macbeth is an evil and treacherous woman in William Shakespeare’s “Macbeth”. The most famous line uttered by Lady Macbeth has to be:

50. Count ___ : BASIE
“Count” Basie’s real given name was “William”. Count Basie perhaps picked up his love for the piano from his mother, who played and gave him his first lessons. Basie’s first paying job as a musician was in a movie theater, where he learned to improvise a suitable accompaniment for the silent movies that were being shown. Basie was given the nickname “Count” as he became lauded as one of the so-called “Jazz royalty”. Others so honored are Nat “King” Cole and Duke Ellington.

57. Do some museum work : CURATE
The term “curator” is Latin and applies to a manager, guardian or overseer. In English, the original curators were the guardians and overseers of minors and those with mental disease.

61. Like some bars : UNEVEN
The uneven bars are a piece of equipment used in women’s gymnastics.

62. Product whose jingle uses the “Dragnet” theme : TUMS
The main ingredient in Tums antacid, made by GlaxoSmithKline, is calcium carbonate. Tums have been on the market since 1930. If you want to save a few pennies, Target brand antacid is identical to Tums, so I hear …

64. Nitpicker : PEDANT
A pedant, someone who is pedantic, is a person “who trumpets minor points of learning”, a person who tends to nit-pick. “Pedant” comes via Middle French from the Italian word “pedante” meaning “teacher”.

65. Sailing rope : TYE
In the nautical world, a tye can be either a chain or a rope and is used to hoist a spar up a mast.

Down
3. Alternative to à la carte : PRIX FIXE
On a restaurant menu, items that are “à la carte” are priced and ordered separately. A menu marked “table d’hôte” (also called “prix fixe”) is a fixed-price menu with limited choice.

5. Like varsity or junior varsity players : ON A TEAM
“Varsity” is an adjective used to describe a university or school team or competition. “Varsity” is a variant of the earlier term “versity” used in the late 17th century, which was a shortened form of “university”.

6. Turn at high speed : CAREEN
“Careen” dates back to 1590 when it meant “to turn a ship on its side, exposing the keel”. The word evolved from the Middle French word “carene” meaning “keel”. Our modern usage, meaning to lean or tilt, only dates back as far as the 1880s. Careen should not be confused with “career”, a verb meaning to move rapidly. One has to “career” from side-to-side in order to “careen”.

23. “The Clan of the Cave Bear” author : AUEL
As Jean Auel prepared her first book in the “Earth’s Children” series, she did a lot of research about the Ice Age, the setting for her stories. She went as far as taking a survival course in cold conditions, learning to build an ice cave and how to make fire, tan leather and knap stone.

25. Largest pelvic bones : ILIA
The sacrum and the two ilia are three bones in the human pelvis.

32. Big tablet : IPAD
The groundbreaking iPad was introduced by Apple in 2010. The iOS-based iPads dominated the market for tablet computers until 2013, when Android-based tablets (manufactured by several companies) took over the number-one spot.

33. Common symbol in pronunciation: Var. : SHWA
A “schwa” is an unstressed and toneless vowel found in a number of languages including English. Examples from our language are the “a” in “about”, the “e” in “taken” and the “i” in pencil.

36. Its graduates include more than 50 astronauts, in brief : USNA
The United States Naval Academy (USNA) is located in Annapolis, Maryland. The USNA was founded in 1845 and educates officers for both the US Navy and the US Marine Corps. The motto of the USNA is “Ex Scientia Tridens”, which translates as “From Knowledge, Sea Power”.

39. Recurring snippet in a bass line, say : RIFF
A riff is a short rhythmic phrase in music, especially one improvised on a guitar.

47. Like cardboard jigsaw puzzles : DIE-CUT
Jigsaws are saws designed for the cutting of irregular curves by hand. The original jigsaw puzzles were created by painting a picture on a sheet of wood and then cutting the picture into small pieces using a jigsaw, hence the name. Today, almost all jigsaw puzzles are pictures glued onto cardboard. The puzzle pieces are then die-cut, and there’s no jigsaw involved at all.

54. Major thoroughfare through Houston, informally : I-TEN
I-10 is the most southerly of the interstate routes that cross from the Atlantic right to the Pacific. I-10 stretches from Santa Monica, California to Jacksonville, Florida. Various stretches of the route have been given different names, for example, the Rosa Parks Freeway, the Santa Monica Freeway, the San Bernardino Freeway and the Christopher Columbus Transcontinental Highway.