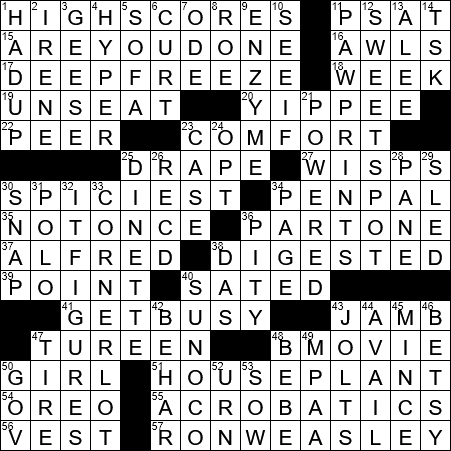 The Scoville scale is a measure of the spiciness of chili peppers. The scale was invented by a pharmacist in 1912, Wilbur Scoville. To determine the position of a pepper on Scoville scale, the amount of capsaicin in the chili is measured. Capsaicin is an irritant that causes the sensation of burning when it comes into contact with tissue, particularly the mucous membranes.

A tureen is a deep dish used for serving soups and stews. This should not be confused with “terrine”, the name of a cooking dish made from glazed earthenware that has a tightly-fitting lid.

The term “B movie” was used to describe movies that were made with low budgets and were intended to be the bottom half of a double feature (remember the days of double features?).

51. A mister may sit next to one : HOUSEPLANT

A mister might mist, provide water to, a houseplant.

Harry Potter, Ron Weasley and Hermione Granger are the principal characters in the “Harry Potter” series of fantasy novels by J. K. Rowling.

Perch are carnivorous freshwater fish that are found all over the world. Perch are particularly common in the Great Lakes, and in Lake Erie.

Enzymes are basically catalysts, chemicals that act to increase the rate of a particular chemical reaction. For example, starches will break down into sugars over time, especially under the right conditions. However, in the presence of the enzyme amylase (found in saliva) this production of sugar happens very, very quickly.

US Senate Pages are 16 and 17-year-old high school juniors who get to watch the political action up close in Washington, while doing the “gofer” jobs needed by the Senators and permanent staff. There are 30 Pages during the school year, 16 appointed by the majority party, and 14 by the minority. The list of former Senate Pages includes Amy Carter (daughter of the President), Chris Dodd (who became a Senator) and Spiro Agnew (who made it to the Vice President’s Office).

36. Opposite of schadenfreude : PITY

Our word “schadenfreude” comes from German. “Schaden” means harm or adversity, and “Freude” means joy. So, schadenfreude is pleasure derived from the misfortune of others. Quite the opposite of pity.

Back in the late 1800s, Sunoco was known as the Sun Oil Company.

Royal Dutch Shell is the fourth largest company in the world in terms of revenue (Walmart is the largest) and is headquartered in the Hague, in the Netherlands. The company was formed in 1907 with the merger of the Royal Dutch Petroleum Company and Shell Transport and Trading company of the UK. The two companies merged in order to compete globally with the biggest US oil company of the day, John D. Rockefeller’s Standard Oil. Shell Oil Company is a US-based subsidiary of Royal Dutch Shell that is headquartered in Houston, Texas.

Joy Behar is a comedian, and former co-host of the hit talk show “The View”. Behar was one of the original co-hosts of “The View”, and stayed with the show from 1997 until 2013. She started hosting her own talk show called “Late Night Joy” in 2015.

The pioneer Davy Crockett is often referred to as “King of the Wild Frontier”. Crockett was from East Tennessee. After serving in the local militia he entered politics and represented his state in the US House of Representatives from 1827 to 1831. He disapproved of many of the policies of President Andrew Jackson, which led to his defeat in the 1834 election for the House. The defeat prompted Crockett to leave Tennessee for Texas. Famously, he died there in 1836 at the Battle of the Alamo.

Bebe Neuwirth is a wonderful actress and dancer who famously played Dr. Lilith Sternin, the wife of Dr. Frasier Crane on “Cheers” and “Frasier”. Neuwirth is a fabulous dancer, having studied ballet at Juilliard. In more recent years she has had starring roles on Broadway, and in 2010 played opposite Nathan Lane in “The Addams Family”. Neuwirth also plays a leading role on the show “Madame Secretary”.