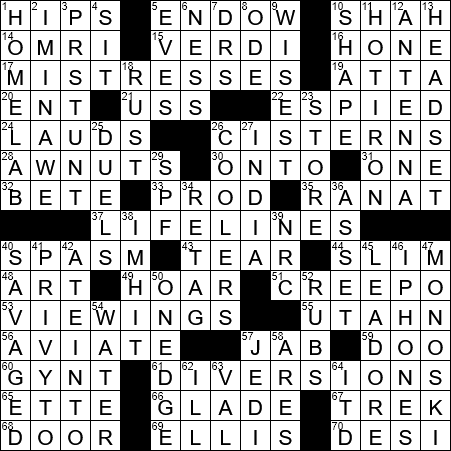 Each of today’s themed answers starts with a Roman numeral:

Shakira is a hugely successful singer from Colombia. She used to appear on TV as one of the coaches on the reality show “The Voice”.

The last Shah of Iran was Mohammad Reza Shah Pahlavi, as he was overthrown in the revolution led by the Ayatollah Khomeini in 1979. The post-revolution government sought the extradition of the Shah back to Iran while he was in the United States seeking medical care (he had cancer). His prolonged stay in the United States, recovering from surgery, caused some unrest back in Iran and resentment towards the United States. Some say that this resentment precipitated the storming of the US Embassy in Tehran and the resulting hostage crisis.

Omri was the sixth king of Israel, and was succeeded by his son Ahab.

15. Composer whose name is Italian for “green” : VERDI

Giuseppe Verdi was an Italian composer, mainly of operas, who was active during the Romantic era. Equally as famous as Verdi’s operas, are arias from those operas such as “La donna è mobile” from “Rigoletto”, “The Drinking Song” from “La Traviata” and “The Chorus of the Hebrew Slaves” from “Nabucco”.

The branch of medicine known as “ear, nose and throat” is more correctly called “otolaryngology”.

The USS Enterprise was Vice Admiral William Halsey’s flagship. It was also the ship he was aboard in the Pacific when the Japanese attacked Pearl Harbor. Apparently, Halsey remarked right after the attack, “Before we’re through with ’em, the Japanese language will only be spoken in hell.”

“Bête noire” translates from French as “black beast” and is used in English to describe something or someone that is disliked.

The TV soap “Dallas” revolved around the Ewing family. The show that ran for 13 years was originally intended as a five-part mini-series, with the main characters being newlyweds Bobby and Pam Ewing. But, the devious character in the piece, Bobby’s brother J. R. Ewing, became so popular with audiences that the series was extended with J. R. at the center of the story.

“Meth” is a street name used for the drug methamphetamine, also called “crank” and “crystal meth”.

They could be Christmas Eve and New Year’s Eve.

The great English poet William Wordsworth is intrinsically linked with the Lake District in the north of England, where he lived from much of his life. The Lake District is a beautiful part of the country, and I’ve been fortunate enough to visit Dove Cottage in Grasmere a couple of times, where Wordsworth lived with his wife Dorothy …

The vast Asian country called India takes its name from the Indus River. The name “Indus” in turn comes from the Sanskrit “Sindhu” that can be translated as “a body of trembling water”. India is the second-most populous country in the world (after China), and the most populous democracy.

We’ve all probably heard the phrase “‘tis an ill wind that blows nobody any good”. The poet Ogden Nash made a “punny” statement about the oboe, calling the instrument “an ill wind nobody blows good”. I must say though, I disagree …

Val Kilmer’s first big leading role in a movie was playing Jim Morrison in Oliver Stone’s 1991 biopic “The Doors”. A few years later, Kilmer was chosen for the lead in another big production, “Batman Forever”. Things haven’t really gone as well for Kilmer since then, I’d say. Off the screen, he flirted with the idea of running for Governor of New Mexico in 2010. A Hollywood actor as a Governor? Would never happen …

15. Composer whose name is Italian for “green” : VERDI

4. Convene, as a legislature : SIT

47. Relative of a snowboard : MONOSKI