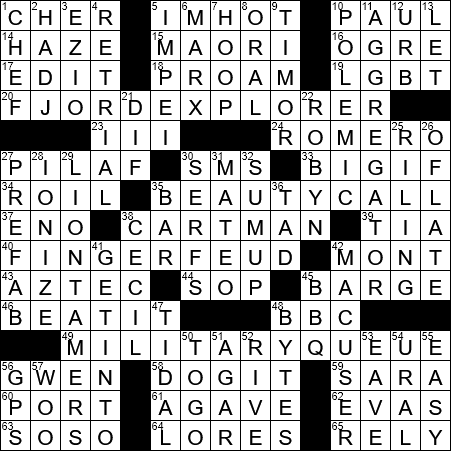 Each of today’s themed answers sounds quite like a well-known phrase, but with a “y-ish” sound inserted. An example that I might give is the word “coot” becoming “cute”, perhaps. Although, as with all of these “sounds like” themes, a lot depends on regional accent:

“Tourney” is another word for a tournament. The term comes from the Old French word for “contest of armed men”, with “tournoier” meaning “to joust, jilt”.

The Ford Explorer SUV was introduced in 1990, and is still going strong.

Cesar Romero was an American actor of Cuban descent from New York. He played a wide variety of roles on the big screen, but is remembered by many for playing the Joker on the “Batman” television show in the sixties.

“Pilaf” is a Persian word, one that we use for rice that is browned in oil and then cooked in a seasoned broth.

Pic de Rochebrune is a mountain in France located in the southwestern Alps. The name translates literally into English as “Peak of Brown Rock”.

Huitzilopochtli was the national god of the Aztecs.

“To dog it” is a slang term meaning to not expend the effort necessary to accomplish a task. Folks tell me that the expression is quite common, but I must confess that I personally haven’t heard it used outside of crosswords. I’ll have to listen more carefully in the future …

The Mojave Desert in the southwest is named after the Native American Mohave tribe. Famous locations within the boundaries of the desert, are Death Valley, Las Vegas, Nevada and the ghost town of Calico, California.

A Haji (also “Hajji”) is the term used for someone who has made a pilgrimage to Mecca, and it is sometimes also used as a form of address for such a person. The journey itself goes by the name “haj”, “hajj” or “hadj”.

Ezio Pinza was an opera singer from Italy. Pinza performed for many years with the Metropolitan Opera in New York before retiring from the Met in 1948. He then launched a career on Broadway and in Hollywood.

I. M. Pei (full name: Ieoh Ming Pei) is an exceptional American architect who was born in China. Of Pei’s many wonderful works, my favorite is the renovation of the Louvre in Paris, especially the Glass Pyramid in the courtyard.

According to Karl Marx:

Religion is the sigh of the oppressed creature, the heart of a heartless world, and the soul of soulless conditions. It is the opium of the people.

“Polemic” can also be spelled as “polemical”. Either way, the term describes something controversial. The word came into English from the Greek “polemos” meaning “war”.

Robyn is the stage name of Swedish singer Robin Miriam Carlsson. Never heard of her outside of crosswords …

San Mateo is a city located south of San Francisco, just across the other side of the Bay from where I live. San Mateo is Spanish for Saint Matthew.

Cecil Rhodes (famous in America as the founder of the Rhodes Scholarship), was a very successful English businessman and South African politician. He founded the De Beers diamond mining company, and also founded the state of Rhodesia which was named after him. The British colony gained its independence over time in the latter half of the 20th century, and is known today as the countries of Zambia and Zimbabwe. The Rhodesian capital of Salisbury was renamed in 1982 to Harare, the current capital of Zimbabwe.

60. Part of a cruise itinerary : PORT

4. Result of a deadlocked jury : RETRIAL

8. Kind of history or hygiene : ORAL