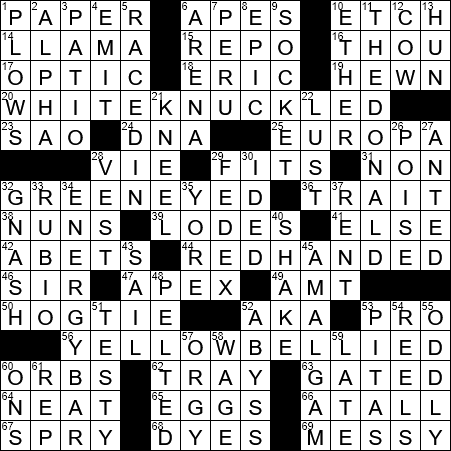 Each of today’s themed answers is common phrase in the format “color+body part+ed”.

Apes and monkeys both belong to the order of primates. The most obvious way to distinguish apes from monkeys is by the presence or lack of a tail. Almost all apes have no tail, and almost all monkeys have tails.

The gorilla is the largest primate still in existence, and is one of the nearest living species to humans. Molecular biology studies have shown that our nearest relatives are in fact the species in the genus Pan (the chimpanzee and the bonobo), which split from the human branch of the family 4-6 million years ago. Gorillas and humans diverged at a point about 7 million years ago. The term “gorilla” derives from the Greek “gorillai” meaning “tribe of hairy women”. Wow!

The poet Ogden Nash is well known for his light and humorous verse. Try this one for size:

The optic nerve enters the eyeball at a location on the retina called the optic disc. Because there are no light-sensitive cells at the optic disc, there is a “hole” in our visual field that is called the blind spot. People with normal vision don’t usually notice this blind spot as the brain “fills in” the blind spot with information from the other eye.

Francis Crick and James Watson discovered that DNA had a double-helix, chain-like structure, and published their results in Cambridge in 1953. To this day the discovery is mired in controversy, as some crucial results collected by fellow researcher Rosalind Franklin were used without her permission or even knowledge.

25. Figure in Greek myth after whom a continent is named : EUROPA

Convents have been religious houses since the 1200s, but it wasn’t until the 1700s that convents became purely female institutions.

A lode is a metal ore deposit that’s found between two layers of rock or in a fissure. The “mother lode” is the principal deposit in a mine, usually of gold or silver. “Mother lode” is probably a translation of “veta madre”, an expression used in mining in Mexico.

41. Counterpart to “if,” in computer science : ELSE

“To be caught red-handed” means to be caught in the act. The expression originated in Scotland and dates back at least to the 1400s. The red in question is blood, as in being caught with blood on one’s hands after perhaps committing a murder or an act of poaching.

52. Letters before a pseudonym : AKA

2. Start or end of the Greek spelling of “Athena” : ALPHA

The term “gladiator” means “swordsman”, coming from “gladius”, the Latin word for “sword”.

The Greek philosopher Empedocles proposed that there are four elements that made up the universe, namely earth, water, air and fire. Aristotle later proposed a fifth element which he called aether (also “ether”). Aether was the divine substance that made up the stars and planets.

11. Ex of Marla and Ivana, informally : THE DONALD

Marla Maples was the second wife of Donald Trump. Maples and Trump dated secretly for a couple of years while Trump was still married to his first wife Ivana. When Ivana discovered the affair, she filed for divorce, and eventually Donald and Marla married. It was Trump’s turn to file for divorce several years later after the National Enquirer outed Marla for having an affair with a Florida bodyguard.

Ivana Winklmayr was born in Czechoslovakia. Winklmayr was an excellent skier, and was named as an alternate for the 1982 Czech Olympic Team. She was promoting the Montreal Olympics in New York in 1976 when she met Donald Trump. Ivana and Donald’s marriage was very public and well-covered by the media, but not nearly as well-covered as their very litigious divorce in the early nineties.

21. Prepare to be knighted : KNEEL

Here’s another word that often catches me out. What we call a vest here in the US is a waistcoat back in Ireland. And the Irish use the word “vest” for an undershirt.

FedEx began operations in 1973 as Federal Express, but now operates very successfully under it’s more catchy, abbreviated name. Headquartered in Memphis with its “SuperHub” at Memphis International Airport, FedEx is the world’s largest airline in terms of tons of freight flown. And due to the presence of FedEx, Memphis Airport has the largest-volume cargo operation of any airport worldwide.

Marco Rubio became the junior US Senator for Florida in 2011. Famously, Rubio ran for the Republican nomination for president in the 2016 race, losing out to future president Donald Trump.

“Abyss”, meaning “deep chasm”, ultimately derives from the Greek “a-” (without) and “byssos” (bottom).