Constructed by: Don Gagliardo & Zhouqin Burnikel
Edited by: Will Shortz 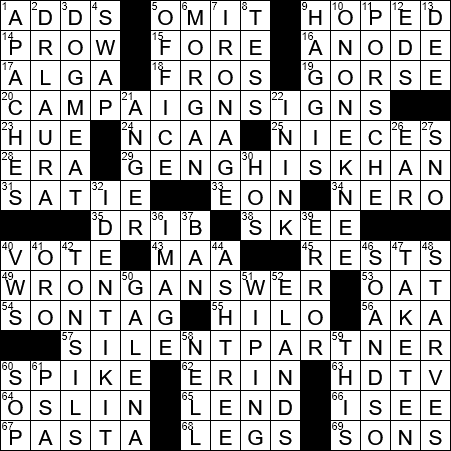 Each of today’s themed answers includes a pair of SILENT letters:

A “duffer” is a golfer, and not a very good one.

Gorse can be a lovely plant to view, largely because of its showy yellow flower. However, gorse took over my front yard so I was glad to see the back of it when I relandscaped recently, going instead with a drought-tolerant design.

Genghis Khan was the founder of the Mongol Empire who was destined to be the largest contiguous empire in the history of the world. He first built his empire by uniting nomadic tribes of northeast Asia, but once Genghis Khan had consolidated his position, he initiated Mongol invasions throughout Eurasia. At it’s height, the Mongol Empire stretched from the River Danube to the Sea of Japan.

Skee Ball is that arcade game where you roll balls up a ramp trying to “bounce” it into rings for varying numbers of points. The game was first introduced in Philadelphia, in 1909.

Kellogg’s has been making Cracklin’ Oat Bran since 1977. The recipe for the cereal was revamped in 1989 in order to reduce the saturated fat content.

Hilo is the largest settlement on the big island of Hawai’i, with a population of over 43,000 (that’s not very many!). I love the Big Island …

George Foreman is a former World Heavyweight Champion boxer and Olympic gold medalist. Famously, Foreman lost his title to Muhammad Ali in the 1974 title fight that was billed as “the Rumble in the Jungle”. Foreman is also known for promoting the George Foreman Grill, and for naming all five of his sons “George”.

The 4-bladed Apache helicopter was introduced back in 1975 as a replacement for the 2-bladed Cobra. The Apache first entered service in 1986, and is still very much in use, mainly with the US Army, the Israel Air Force, the Egyptian Air Force and the Royal Netherlands Air Force.

According to Dr. Laura Schlessinger herself, her radio show “preaches, teaches, and nags about morals, values and ethics.”

“Dilbert” is a comic strip drawn by Scott Adams, a “neighbor” of mine here in the Bay Area. Adams used to be co-owner of a restaurant at the end of my street that had a menu replete with “Dilbertesque” comments.

The Boxster is a roadster built by Porsche that was introduced in 1996. The name “Boxster” comes from a melding of “boxer” and “roadster”. A “boxer” engine (or “flat” engine) is one in which the pistons move in a horizontal plane, with the cylinders laid out in two rows opposing each other.

A facial composite is a graphical representation of the face, usually of a suspect in a crime. Such composites used to be put together by trained artists, but then in the sixties interchangeable templates were developed to standardize and simplify the process. The kit of templates called “Identi-kit” was produced by Smith & Wesson.

42. Painful things to have removed : TONSILS

Galena is the most widely used mineral to produce lead. It is a form of lead sulfide. Galena is the state mineral of Missouri and of Wisconsin.